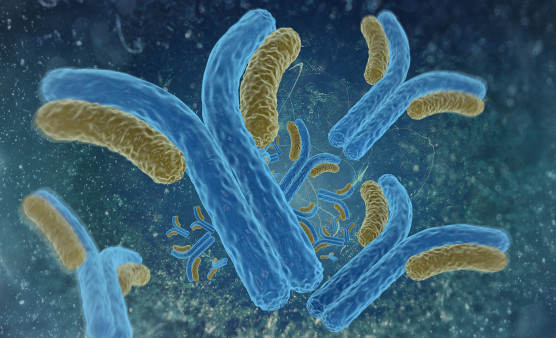 Researchers Find New Immune Checkpoint—and a Drug to Block It

Researchers at Compugen and Bayer have discovered a new immune checkpoint dubbed ILDR2 and designed a novel checkpoint inhibitor to block it, according to a presentation at the recent American Association for Cancer Research (AACR) annual meeting in Chicago.

T cells, the main soldiers of the immune system, recognize and destroy cancer cells in a two-step process that involves T-cell receptors that recognize tumor antigens and immune checkpoints that determine whether T cells are turned on or off. Some cancers can disable the immune cells that fight them, and drugs known as checkpoint inhibitors can release the brakes and restore T-cell activity.

The newly discovered immune checkpoint is a protein known as immunoglobulin-like domain containing receptor 2, or ILDR2 for short. The exact physiological role of ILDR2 is still unclear, but it has been implicated in the development of type 2 diabetes, according to the study abstract. ILDR2 is expressed on fibroblastic reticular cells, which are involved in immune regulation.

The researchers hypothesized that ILDR2 might play a role in T-cell priming and the initiation of antigen-specific T-cell responses. In preclinical studies they were able to show that it has immunomodulatory effects in autoimmune diseases such as rheumatoid arthritis.

They then produced antibodies against the novel target and found one, dubbed BAY1905254, that demonstrates antitumor activity when used alone in mice. Laboratory studies showed that the antibody led to enhanced infiltration of dendritic cells, which help trigger T-cell responses. BAY 1905254 was thus able to counteract the immunosuppressive effects of the ILDR2 checkpoint.

BAY1905254 was also found to have additive or synergistic (more than additive) effects when combined with a PD-L1 inhibitor, a traditional cytotoxic chemotherapy drug (docetaxel) and a tumor antigen vaccine, “indicating the possibility for multiple combination approaches for use in cancer immunotherapy,” according to a Compugen press release.

Compugen also previously identified two other checkpoints known as TIGIT (T-cell immunoreceptor with Ig and ITIM domains) and PVRIG (poliovirus receptor-related immunoglobulin) that are also targets for the development of new checkpoint inhibitors.

“ILDR2 is a completely new immune checkpoint that we discovered through our computational discovery capabilities,” Compugen president and CEO Anat Cohen-Dayag, PhD, said in the press release. "This immune checkpoint, together with the discovery of TIGIT and PVRIG, clearly demonstrate the power and value of Compugen’s predictive discovery capabilities in the discovery of new drug targets and pathways, enabling the development of first-in-class product opportunities.