This could result in better identification of the people who could benefit from screening and early detection of pancreatic cancer.

A risk prediction model that combined genetic and clinical factors with circulating biomarkers identified people at significantly higher than normal risk of pancreatic cancer, according to results of a study published in Cancer Epidemiology, Biomarkers & Prevention, a journal of the American Association for Cancer Research.

“Pancreatic cancer is a particularly deadly cancer, with about 80 percent of patients diagnosed with advanced, incurable disease,” said the study’s lead author, Peter Kraft, PhD, professor of epidemiology at the Harvard T.H. Chan School of Public Health in Boston. “Catching it at an earlier stage makes it more likely that surgery will be an option, increasing the chances of survival.”

Kraft explained that existing screening techniques, such a magnetic resonance imaging (MRI), are not recommended for the general public because they may generate excessive rates of false positives. They are most appropriate for people at higher risk of pancreatic cancer, and therefore, improving identification of the high-risk population could improve tailored prevention and screening efforts, he said.

Risk factors for pancreatic cancer include family history, chronic conditions like diabetes and pancreatitis, and smoking. Kraft said prospective studies have shown that certain circulating biomarkers tied to insulin resistance have also been shown to influence risk. “These factors have been investigated individually, and in this study, we wanted to examine the combined effect of clinical factors, common genetic predisposition variants, and circulating biomarkers.”

The study examined data from four large prospective cohort studies: the Health Professionals Follow-up Study; the Nurses’ Health Study; the Physicians’ Health Study; and the Women’s Health Initiative. They analyzed data from 500 patients diagnosed with primary pancreatic adenocarcinoma between 1984 and 2010, as well as 1,091 matched controls. The study enrolled only U.S. non-Hispanic white participants, because genomic risk variants have been confirmed in the white population but not in other groups, Kraft said.

The researchers collected data on lifestyle and clinical characteristics from patient questionnaires; blood samples; and genomic DNA from peripheral blood leukocytes of the participants. They calculated a weighted genetic risk score based on data from two large genome-wide association studies.

While this model would have to be confirmed and studied in other populations, Kraft said the study indicates that combining biomarkers with clinical and genetic factors can result in better identification of the people who could benefit from screening and early detection of pancreatic cancer.

“Like most cancers, pancreatic cancer is multifactorial,” Kraft said. “The more we are able to combine information from multiple domains, the better we will become at identifying those who could benefit from screening.”

The study’s key limitation is that family history of pancreatic cancer was not collected from most participants, making it difficult to estimate the relative risk of this important factor. The impact of smoking status also could not be directly estimated, as the contributing studies matched patients with pancreatic cancer to cancer-free individuals based on their smoking status. This study was funded by grants from the National Institutes of Health; Dana-Farber Cancer Institute Hale Family Center for Pancreatic Cancer Research; Lustgarten Foundation; Stand Up To Cancer; Pancreatic Cancer Action Network; Noble Effort Fund; Promises for Purple; and the Broman Fund for Pancreatic Cancer Research. Kraft declares no conflicts of interest.

This announcement was originally published on April 22, 2020, by the American Association for Cancer Research. It is republished with permission. 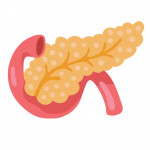