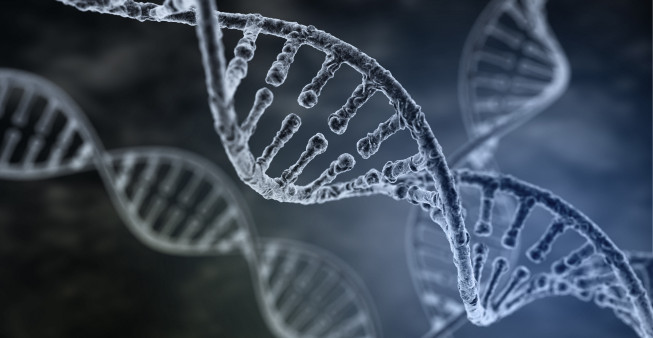 So far, only a small proportion of cancers have known driver mutations, despite the best effort of hundreds of researchers worldwide.

Scientists have found a way to uncover the secrets behind the development of cancer hidden away amongst vast ‘gene deserts’ in our DNA.

Using the new technique, researchers believe they can identify mutations that help cause many different types of cancer—but which up to now have been missed because they don’t occur in genes themselves.

Their study demonstrates the power of the new method by revealing a brand new DNA mutation that seems to drive the development of bowel cancer—a disease that affects 42,000 people in the UK each year.

The team at The Institute of Cancer Research, London, used a technique called chromosome conformation capture to look at the three-dimensional shape of DNA when wrapped up in chromosomes.

The researchers searched for mutations in areas that were themselves devoid of genes—so-called gene deserts—but which through bending of the three-dimensional DNA molecule affect gene activity.

Their study was published Monday in Nature Genetics and was funded by Cancer Research UK and the European Union. It was the first time chromosome conformation capture has been used to narrow down the hunt for new cancer mutations in this way.

Research at the ICR is underpinned by generous contributions from our supporters. Find out more about how you can contribute to our mission to make the discoveries to defeat cancer.

The DNA mutations that drive cancer are a crucial piece of the puzzle that can help answer why the cancer occurred in the first place and what are the best drugs to treat it.

So far, only a small proportion of cancers have known driver mutations, despite the best effort of hundreds of researchers worldwide.

The team at The Institute of Cancer Research (ICR) believes this is because our efforts have been focused on genes—stretches of DNA that contain the instructions for making proteins.

But between 98 percent of the human genome is actually DNA that doesn’t contain genes – and the team used the new technique to work out which of these areas were most promising to search for cancer-causing mutations because of their interactions with other parts of the genome.

The researchers showed that areas of gene desert DNA called cis regulatory elements – which can boost the activity of genes—had a key role in driving some bowel cancers.

The team from the ICR—a research institute and a charity—identified mutations in a specific cis regulatory element that was common in some bowel tumors and increased the activity of a gene called ETV1 by four-fold.

The ETV1 gene has a role in cell growth, movement and blood vessel formation, and has previously been found to be overactive in prostate cancer, melanoma, Ewing sarcoma and gastrointestinal stromal tumors.

The researchers looked in detail at genetic data from 50 bowel cancer patients and found 12 percent had mutations associated with an increase in ETV1 activity.

In future, these patients may benefit from drugs that target ETV1, which are currently in clinical trials for patients with gastrointestinal stromal tumors.

Technique Can ’Study Any Cancer Type’

Professor Richard Houlston, Professor of Population and Molecular Genetics at The Institute of Cancer Research, London, said, “Cancer is very much a genetic disease, yet researchers so far have only managed to uncover a tiny number of mutations that drive its development. ”

“That could be because we’ve been focusing on the wrong place. Our team have started to look beyond genes, at the other DNA in cells that can interact with genes and affect how they operate. By looking at the interactions between enhancers and genes we were able to narrow down the search for cancer drivers.”

“We have used the technique to identify a new driver of bowel cancer, but it could be employed to study any cancer type. We hope that as well as increasing our understanding of the development of cancer.”

Professor Paul Workman, Chief Executive of The Institute of Cancer, London, said, “The genetics of cancer is enormously complicated and we are only really beginning to scratch the surface.”

“Most of the cancer-causing changes we know about are located in the genes that code for protein products—whereas this very interesting study has provided a way of efficiently searching the vast swathes of DNA in our genomes that don’t contain genes for clues about cancer’s origins.”

“This information could lead us down new paths for cancer treatment or badly needed routes to early detection and prevention.”

This news release was originally published on the Institute for Cancer Research website on September 17, 2018.