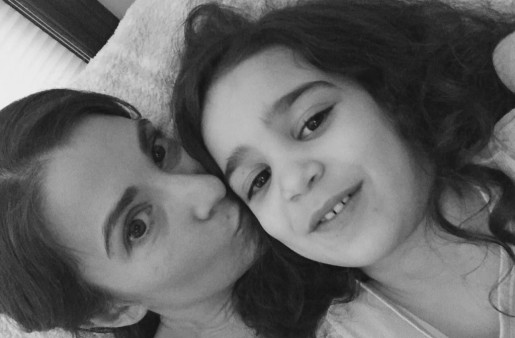 Jen Mancuso with her daughter, Rosa Courtesy of Jen Mancuso

“The more we continue to learn about different areas of the immune system, the more research and development of new drugs we’re going to see.”

Jen Mancuso’s analytical mind has served her well during her career as a biochemist and information technology expert. Thinking like a diagnostician has also allowed her to remain upbeat while facing the greatest challenge of her life: stage IV melanoma.

A wife and mother of two pre-teen daughters, Mancusco, 41, says she appreciates the intricacies behind the advances in immunotherapy and targeted therapies that are allowing her and many others with late-stage cancers to enjoy longer, fuller lives. Bi-weekly infusions in the Center for Melanoma Oncology at Dana-Farber/Brigham and Women’s Cancer Center have stabilized Mancuso’s melanoma tumors and eliminated the metastases in her brain, allowing her to return to work and a semi-active lifestyle.

“I understand the science behind the therapy and the mechanisms by which the drugs I am getting work to fight my cancer—and I’m very reassured by my progress,” says Mancuso, whose initial melanoma diagnosis in the summer of 2016 was upgraded to stage IV disease when a stroke led to the discovery of tumors in her brain. “My care team does a great job coming together to make the best decisions for me and letting me maintain a sense of control.”

Immunotherapy refers to treatments that use the body’s own immune system to combat diseases. This includes drugs known as checkpoint inhibitors, which work to stop cancer cells from outsmarting the human immune system.

“Immunotherapies were developed to rev up the immune system, which is designed to fight cancer, but sometimes the cancer cells form proteins on their surface that help them hide from or shut off the immune system,” explains oncologist Elizabeth Buchbinder, MD, who is heading up Mancuso’s care team. “Checkpoint inhibitors come in and block those proteins so that the immune system stays active and keeps attacking the cancer.”

The first checkpoint inhibitor approved for melanoma patients was ipilimumab (also known as Yervoy) in 2015; this has since been joined by others, including nivolumab (Opdivo). Immunotherapy has now become a crucial frontline treatment for many late-stage melanoma patients, including Mancusco.

Mancuso was initially treated with both ipilimumab and nivolumab, a combination that resulted in rapid shrinkage of her tumors. Due to a bout of hepatitis thought to be caused by the Yervoy, she has just been on Opdivo since April 2017.

In the meantime, Buchbinder and her research colleagues are focused on finding additional immunotherapy drugs—including checkpoint inhibitors —to help bring about more patient success stories. “The more we continue to learn about different areas of the immune system, and the various steps that happen along the process, the more research and development of new drugs we’re going to see,” she says.

Buchbinder calls it a “very exciting time” for melanoma patients and clinicians because of the burst of new treatment options. Physicians and nurses are collaborating regularly, sharing new findings and thoughts with a degree of immediacy a scientist like Mancusco finds exhilarating.

“They even communicate with each other throughout my visit,” says Mancuso. “When I meet with Dr. Buchbinder she tells me she’s already talked to my neuro-oncologist, who I saw first, and already gotten back my bloodwork from earlier that same day. I feel like I’m getting the latest findings and data every time I come in, which is very comforting.”

Today, Mancuso is back to enjoying her busy life as a working parent, and “not sweating the small stuff.” Every two weeks, she takes an afternoon off from her job and comes to Dana-Farber for bloodwork, scans, and infusions.

“If someone cuts me off in traffic, I don’t worry about it,” she says. “If you want to get in front of me, go ahead. I don’t focus on setbacks; just the path going forward.”

This article was originally published on April 8, 2019, by Dana-Farber Cancer Institute. It is republished with permission.