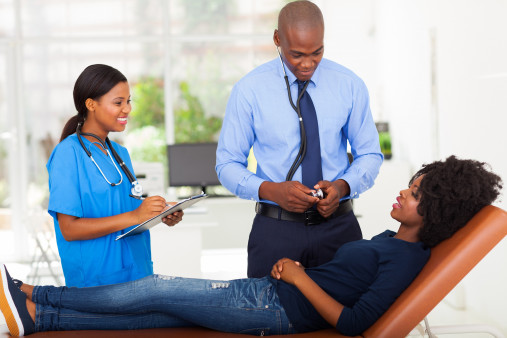 “By 2030 in the 20-to-35-year-old age group, the rate of colorectal cancer is expected to double,” says Christopher Lieu, MD. Istock (Model(s) used for illustrative purposes only)

To Screen or Not to Screen? That Is the Question.

Guidelines are continuing to evolve to meet the changing landscape of cancer and the new technologies to find and treat it.

Nearly a decade ago, a lightbulb went on in Christopher Lieu, MD’s head. At the time, Lieu was in the beginning of his fellowship and the lightbulb was his recognition of a disturbing trend: More and more young people were being diagnosed with colon cancer.

“I remember talking with other fellows and doctors who were also seeing more young patients,” says Lieu, who is now CU Cancer Center’s deputy associate director for clinical research. “We all started to question whether or not this trend was bigger than our clinic.”

As it turns out, the pattern was bigger than one clinic. In fact, since the early 2000s Colorado has seen a 2–to–3 percent increase per year in people under the age of 50 being diagnosed with colon cancer, on par with the national average.

“If these rates continue, by 2030 in the 20-to-35-year-old age group, the rate of colorectal cancer is expected to double,” says Lieu.

No one knows why. And colon cancer is not the only cancer that is on the rise in younger people. Just this year the New England Journal of Medicine released a study showing that while men used to be most commonly diagnosed with lung cancer, young women have now outpaced young men.

These shifting trends in who gets cancer are more than factoids. Lung cancer and colon cancer are the numbers one and two causes of cancer-related death, respectively, in the United States. The other problem: Typically, screenings for these cancers do not start until people are middle aged or older. So, if more and more younger people, or different demographics of people, are being diagnosed with these cancers, do the old screening guidelines still hold up?

Finding the needle in the haystack

Most of the time when a younger person comes to the doctor complaining of stomach pain, they are diagnosed with indigestion, a food allergy, or something from a laundry list of other gastrointestinal problems. And most of the time that diagnosis is correct. However, there are cases in which the stomach pain is something much more serious.

“I was told the pain was caused by constipation, gas, or other typical gastrointestinal problems,” says Stephen Estrada, a CU Cancer Center patient currently on an immunotherapy trial for advanced colon cancer. “When I was finally diagnosed I was 28 years old. I was considered too young to have colon cancer.”

Stephen and his medical team discovered that he carries a genetic mutation in a gene called MLHI, indicating a condition known as Lynch Syndrome. Lynch Syndrome makes people much more likely to develop colon cancer as well as a handful of other types of cancer.

That is the challenge of screening. And, unfortunately, answers to these questions are far from clear is most cases. What is clear is that as more younger people get colon cancer, younger people should be screened.

“Colon cancer is still rare in young people, there is no question about that,” Lieu says. “That being said, doctors should not necessarily write off cancer because of a patient’s age. Awareness is key.”

Five years ago, the American Cancer Society (ACS) recommended that colon cancer screening start for average-risk adults at age 50. Then in spring 2018, CU Cancer Center researchers and colleagues around the country published a study that added new numbers of young colon cancer patients into the mathematical model used to guide screening recommendations. What it showed is that, sure enough, screening would do the most good if it started earlier. As of May 30th, 2018, the ACS revised its guidelines to reflect the changing cancer landscape, recommending that people with average risk start screening at 45.

“Moving the start of screening up to age 45 for the average risk population is a considerable change,” says Andrea (Andi) Dwyer, director of the Colorado Cancer Screening Program at the CU Cancer Center and program director at the Colorado School of Public Health. Dwyer was an author on the paper and CU’s Dennis Ahnen, MD, was one of the study’s senior authors.

“Colorectal cancer screening is just one example of a changing cancer paradigm,” says Dwyer. “Physicians and researchers should be aware of and recognize trends in their patients. Adjusting screening guidelines based on these trends may help save lives.”

The reality of screening

Actually, the answer is much harm.

“If we started screening everyone at such a young age it could cause a lot of unnecessary trauma and stress for patients,” says Lieu. “The amount of anxiety caused by screening, the time away from work to prep and actually do the procedures, and the risk of over diagnosing, and in turn, over treatment, are just a few of the stressors that need to be considered. Some tests, for example colonoscopy, also have risks of bleeding bowel perforation that can also cause harm.”

Not only would earlier screening for cancer be distressing for people, it would be unproductive.

“It’s all about comparing benefit with burden. If screening started at age 20, you’d have maximum benefit but also a huge burden. We would find very few cases of cancer per colonoscopy,” explains Dwyer. “On the other hand, if screening started at age 60, you’d have minimal burden but also minimal benefit – we would be missing some cancers and finding others too late. The goal of screening guidelines is to find that sweet spot where there is the most benefit with the least burden.”

So, while it does not make sense to start screening everyone for cancer at a young age, it is important that those who fall in the recommended guidelines do actually get screened. In the end, accurate screening guidelines are only useful if people follow them.

“In the case of colorectal cancer, if everyone followed screening recommendations based on risk, we could cut mortality by at least a half, with some estimates suggesting mortality would be cut even more,” says Dwyer. “Screening is the best chance to catch a cancer early and prevent it from advancing.”

Catching cancer early through screening saves lives. Yet many Coloradoans choose not to be screened or do not have access to proper screening. That’s where the Colorado Cancer Screening Program (CCSP) comes in.

“So far, the CCSP has prevented more than 500 colon cancers,” says Dwyer. “We are hoping to navigate an additional 7,000 Coloradoans to preventive screenings as well as identify those who are at a higher risk due to hereditary conditions. The increased screening will have an enormous impact on preventing cancer diagnoses, suffering, and deaths in our state.”

Previously the CCSP focused on colorectal cancer but is now working to expand access to and use of lung cancer screening, genetic screening, familial screening, and to better align with breast cancer and cervical cancer programs. The initiative is designed to help patients navigate the screening process and understand the results, making cancer prevention and early diagnosis a priority.

In the meantime, screening guidelines continue to evolve to meet the changing landscape of cancer and the new technologies available to find and treat it.

“As technology improves and screening tests become easier, more cost-effective, and accurate, it may be plausible to start cancer screening earlier,” says Lieu. “It will be sooner than we think. For example, blood tests that screen for various types of cancer are being investigated right now.”

Cancer screening isn’t and shouldn’t be for everyone. But when the benefit outweighs the burden, screening saves lives. With new understanding of cancer and new screening technologies, Colorado is leading the way to save even more lives through cancer prevention, early diagnosis, and early treatment of many types of cancer.