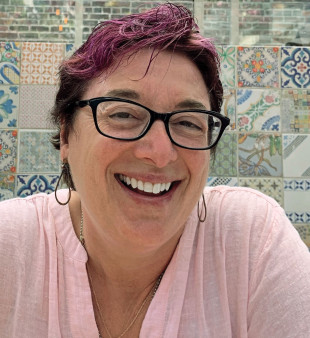 In 2017, when I was 54 and my son was nearly 17, I found out I had Stage IV colon cancer. My husband and I were devastated by the diagnosis, but we did not hide it from our son. In fact, we told him the same day we found out.

The truth is, we already had been keeping a secret from him: I am HIV positive. I was diagnosed in 1992. At the time, I almost didn’t get tested, since I am a straight white woman. That was just my own prejudice.

There were no good treatments in those days; HIV was more or less a death sentence. Stigma toward HIV-positive people was rampant. I experienced some, but it was far worse for others. I switched careers to work in the HIV field and found comfort in the HIV and LGBT communities. I was fairly open about my HIV status with family, friends and work colleagues.

By 2000, though, we had moved to a suburb in New Jersey and had a beautiful, healthy baby, and I no longer felt I could tell people about my HIV status. I was afraid that our son would face discrimination, that parents would not want their children associating with him.

It was different when the cancer diagnosis came. As with HIV, I was afraid my time was up. But I wasn’t afraid people would judge me for contracting colon cancer.

I know stigma about cancer exists, and, although I did not experience it, I can relate. Having certain kinds of cancer may cause feelings that people will judge you—just as I was afraid people would think that contracting HIV was my fault. Instead of counting on support and sympathy, you may fear or experience stigmatization and moralizing. It is deeply hurtful if this happens, especially if you are judged by people close to you.

In 2019, a journalist I know asked to interview me for this magazine’s sister publication, POZ, about living with HIV and cancer. I agreed, knowing this would force me to come out. The day the article hit the internet, I finally told my son.

He didn’t understand why I had waited so long. It was really NBD (no big deal) to him. His generation does not see HIV as a death sentence or as stigmatizing to me or to him. I wondered why I had been so fearful of telling people in our local community.

While you cannot control how others react, looking at it now, I think being open is a better option than trying to keep a secret.

Choose to be kind to yourself. If you are angry at anything you have done, forgive yourself. Find people who will support you. This will give you more strength to face your fears and any critics.

After I told my son, I felt liberated. I may not ever be the openly HIV-positive advocate fighting stigma and ignorance I once thought I should be. But I’m no longer keeping secrets or living in fear.

I did that for far too long.