Most people are familiar with chemotherapy and targeted therapy for cancer treatment, but a new type of therapy, known as antibody-drug conjugates (ADCs), incorporates the best features of both, combining the precision of monoclonal antibodies with the cancer-killing power of cytotoxic drugs.

Several new ADCs have been approved by the Food and Drug Administration (FDA) in recent years after demonstrating good overall response rates—and in some cases improved survival—in clinical trials. Many more are now being evaluated in studies for people with breast, kidney, lung, ovarian, pancreatic, prostate and other cancers.

“Antibody-drug conjugates are strategic tools in the targeted treatment of cancer,” says Richard Pazdur, MD, director of the FDA’s Oncology Center of Excellence. “These conjugates combine the ability of monoclonal antibodies to target specific receptors on cancer cells and then deliver a drug to the cancer cell.”

Traditional chemotherapy works by killing or halting the multiplication of fast-growing cells. While chemo drugs can effectively kill cancer, they aren’t very discriminating. They also kill off rapidly multiplying healthy cells, such as those in the bone marrow and hair follicles, leading to a wide variety of side effects.

Antibody-drug conjugates act like a Trojan horse, using monoclonal antibodies—manufactured versions of proteins the immune system produces to fight disease—to sneak potent drugs into tumors. ADCs are constructed using engineered antibodies designed to target specific antigens, or proteins on cells. Like targeted therapy, they home in on specific receptors or other markers that distinguish malignant cells from normal ones. A chemical linker is added to enable the antibodies to carry a payload of chemotherapy drugs (see illustration, below). In some ADCs, the antibody component has antitumor activity of its own, while in others it primarily serves as a delivery vehicle for drugs. 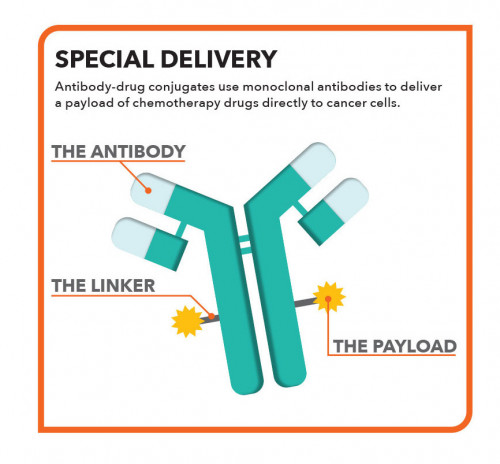 The armed antibodies bind to and are engulfed by cancer cells, where they release their deadly cargo. Because the payload is precisely delivered to cancer cells while sparing normal cells, it’s possible to use more potent agents that would be too toxic on their own. Thus, the drugs work where they’re needed, minimizing collateral damage to healthy cells.

Development of ADCs
The idea behind ADCs arose in the early 1900s, when Nobel laureate Paul Ehrlich—considered the father of chemotherapy—proposed that a “magic bullet” could target pathogens or cancer without harming the body as a whole.

Early ADC clinical trials in the 1980s used mouse antibodies as a delivery vehicle, but these proved too toxic and not very effective. The first generation of ADCs based on chimeric (part mouse and part human) and humanized antibodies were developed in the 1990s, but they didn’t deliver a large enough payload. What’s more, early linkers used to attach drugs to antibodies were unstable and would sometimes prematurely release their toxic cargo into the bloodstream. Today, some of the newest ADCs use fully human antibodies, and more stable linkers hold on to their payload until they reach their destination.

The nature of the payload has changed as well. Some of the early ADCs carried traditional chemotherapy drugs, but these did not work much better than cytotoxic drugs alone. So scientists turned to much more potent chemicals that were too toxic for systemic administration but could be safely delivered directly to cancer cells. ADC payloads include agents that damage a cell’s DNA, disrupt DNA replication or interfere with microtubules, tiny structures needed for cell division.

The first approved ADC, Mylotarg (gemtuzumab ozogamicin), was granted accelerated approval in 2000 for acute myeloid leukemia. Two medications usually classified as radioimmunotherapy rather than ADCs, Bexxar (tositumomab with iodine 131) and Zevalin (ibritumomab tiuxetan with yttrium-90), approved in 2002 and 2003, use monoclonal antibodies to deliver radioactive isotopes that destroy cancer cells. In 2011—more than a decade after Mylotarg—the FDA approved Adcetris (brentuximab vedotin) for two types of lymphoma.

It’s no coincidence that the first ADCs were used to treat blood cancers, such as leukemia and lymphoma, which are more easily accessible. But technological advances have enabled the development of next-generation therapies that can better penetrate into solid tumors. There are now a dozen ADCs on the market, more than half of which were approved in the last three years (see “Approved ADCs,” below).

Hitting the Right Target
The key to a successful ADC is its ability to hit the right target. Ideally, the targeted antigen or receptor would be reliably expressed on cancer cells but not on normal cells, allowing for precision drug delivery. Some blood cancers, for example, have unique antigens—such as the CD22 and BCMA receptors on B cells—that make good antibody targets.

Two ADCs, Kadcyla (ado-trastuzumab emtansine) and Enhertu (fam-trastuzumab deruxtecan), use trastuzumab (Herceptin and biosimilars), one of the first monoclonal antibodies ever developed for cancer treatment, which binds to the HER2 receptor on breast tumors and several other types of cancer.

ADCs can remain active against cancer that does not respond—or no longer responds—to treatment with monoclonal antibodies alone, chemotherapy alone or both. Kadcyla works against breast cancer that no longer responds to Herceptin and chemo, likely because it delivers more drug to tumors with fewer unacceptable side effects. And Enhertu, which carries a bigger and different payload, in turn works against cancer that has stopped responding to Kadcyla. In a Phase II trial, Enhertu yielded a remarkable 61% overall response rate for women with metastatic HER2-positive breast cancer who had received a median of six prior lines of therapy, including Herceptin and Kadcyla.

In addition to HER2, other ADC targets on solid tumors include the cell adhesion molecule nectin-4, which aids cell migration, and Trop-2, which plays a role in cell signaling. In a clinical trial of the nectin-4 ADC Padcev (enfortumab vedotin), 44% of patients with metastatic bladder cancer experienced tumor shrinkage despite having previously received multiple lines of therapy (see “The Art of Living With Cancer”).

Because these and other targets are found on multiple types of cancer, ADCs have pancancer potential, meaning they’re active against tumors with shared characteristics at different locations in the body. For example, Trodelvy (sacituzumab govitecan), which targets Trop-2, is approved for both triple-negative breast cancer and bladder cancer. Enhertu, which is approved for HER2-positive breast and stomach cancer, also shows promise for non-small-cell lung cancer and colorectal cancer.

But the precision of ADCs can also be a disadvantage. Like targeted therapies, these medications recognize cancer cells with specific characteristics, so they don’t work against all malignancies. While around 20% of breast and stomach tumors are HER2 positive, the proportion drops to only about 2% for lung cancer. And nectin-4, which is expressed on most bladder tumors, is less common on other tumor types. Genomic testing of a tumor biopsy sample can help determine whether a particular patient’s cancer is likely to be susceptible to ADCs.

Future Directions
Despite their targeted nature, ADCs are not free of side effects, though these are generally more limited in scope compared with traditional chemotherapy. In some cases, the cytotoxic drug can leak out of cancer cells and harm neighboring cells. On the other hand, this “bystander effect” can enable ADCs to kill nearby tumor cells even if they do not themselves express the antibody’s target protein.

Side effects can also occur when normal cells express the same receptors as cancer cells (known as on-target/off-tumor toxicities). Antibody targets are chosen because they are preferentially expressed on cancer cells, but if even a small proportion of healthy cells also carry a receptor, this can lead to adverse effects. In addition, ADCs can stop working as cancer cells become resistant—for example, by reducing their expression of targeted receptors or expelling cytotoxic drugs from cells.

As is often the case with cancer treatment, combining ADCs with other types of therapy may lead to better outcomes. For example, when ADCs kill cancer cells, the dying cells release chemical signals that can recruit cancer-fighting T cells to “cold” tumors that aren’t recognized by the immune system, which could help checkpoint inhibitor immunotherapy work better.

Research is ongoing to discover new ADC targets on more types of tumors and in the surrounding tumor microenvironment. Scientists are also working on antibodies that can act as more efficient delivery vehicles as well as more stable linkers and more potent payloads. ADCs that use bispecific antibodies with dual antigen-binding sites and conjugates based on smaller antibody fragments or peptides that penetrate tumors more readily are currently in development. What’s more, ADCs have the potential to deliver targeted therapy and immunotherapy as well as chemotherapy drugs.

“Antibody-drug conjugates are transforming the way cancers are treated given their specificity, stability, potency and potential to be paired with a variety of anticancer treatments,” says Roger Dansey, MD, chief medical officer of Seagen, a pioneer in ADC technology. “ADCs are becoming a cornerstone of blood cancer and solid tumor treatment and are improving outcomes for patients.”

Dozens of experimental ADC candidates for numerous malignancies are now being evaluated in clinical trials. Talk to your care team about whether participating in a trial might be a good option for you.