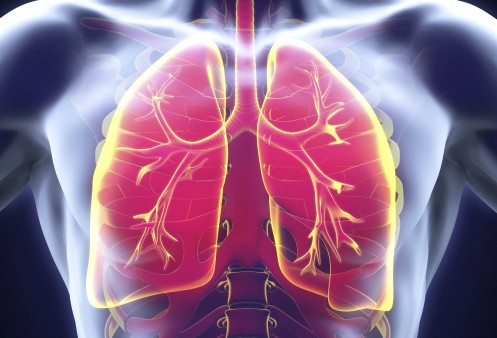 Immunotherapy plus targeted therapy and chemotherapy extended progression-free survival by up to four months.

Mark Socinski, MD, of Florida Hospital Cancer Institute, presented findings from the Phase III IMpower150 trial at a session titled “Immunotherapy Combinations: The New Frontier in Lung Cancer.” The session also included other studies suggesting that immunotherapy should be considered for first-time treatment of advanced lung cancer, rather than waiting for chemotherapy to fail.

Non-small-cell lung cancer, which accounts for more than 80 percent of all lung cancers, is often detected late and has a high mortality rate. Lung cancer is the leading cause of cancer-related death for both men and women in the United States, and it is expected to cause about 154,000 deaths this year, according to the American Cancer Society.

Tecentriq is a checkpoint inhibitor that blocks the PD-L1 protein on cancer cells or immune cells inside tumors. PD-1 is an immune checkpoint, a receptor on T cells that plays a role in regulating immune function. Some tumors can hijack PD-1 to turn off immune responses against them. Drugs that block the interaction between PD-1 and its binding partner, PD-L1, can release the brakes and restore T-cell activity.

IMpower150 is an open-label clinical trial evaluating the safety and efficacy of Tecentriq plus Avastin and chemotherapy. Avastin is a VEGF (vascular endothelial growth factor) angiogenesis inhibitor that interferes with the development of blood vessels that supply a growing tumor. In addition, it may also inhibit VEGF-related immunosuppression, promote T-cell infiltration into tumors and help activate T-cell responses against tumors, according to Genentech, the maker of both drugs.

The study included 1,202 participants with Stage IV metastatic (spread beyond the lungs) nonsquamous NSCLC who had not yet been treated with chemotherapy for advanced disease. They were classified according to their level of PD-L1 expression on tumors and immune cells, whether their cancer had spread to the liver, and the presence of EGFR (epidermal growth factor receptor) or ALK (anaplastic lymphoma kinase) gene mutations. These mutations offer opportunities for targeted therapy, and patients without them are harder to treat.

Among people without EGFR or ALK mutations, the median progression-free survival (PFS), meaning patients were still alive with no disease progression, was 8.3 months for those treated with Tecentriq, Avastin and chemotherapy versus 6.8 months for those who received Avastin and chemotherapy—a 38 percent reduction in the risk of disease progression or death. This was similar to the benefit seen in the full study population and in a subgroup with a biomarker that may predict good response to immunotherapy.

Among people with EGFR or ALK mutations (14 percent of all participants), the median PFS was 9.7 months with Tecentriq/Avastin/chemotherapy versus 6.1 months with Avastin/chemotherapy—a 41 percent reduction in disease progression or death. Among those with a specific targetable EGFR mutation (exon 19 deletion), the difference was 10.2 months versus 6.1 months, respectively. People with liver metastasis saw a larger advantage (8.2 months versus 5.4 months) than those without (8.3 months versus 7.0 months).

Socinski noted that the trial has also demonstrated an overall survival benefit, the gold standard for cancer treatment trials. In a press release issued shortly before the AACR meeting, Genentech announced that an interim analysis showed that people receiving Tecentriq/Avastin/chemotherapy had a significant improvement in overall survival compared with those receiving Avastin/chemotherapy, though the company did not provide detailed numbers.

Results for the Tecentriq plus chemotherapy without Avastin group will be presented later, clarifying whether the immunotherapy drug offers as much benefit in the absence of the angiogenesis inhibitor.

The safety of the Tecentriq/Avastin/chemotherapy combination appeared to be consistent with the known safety profile of these drugs and no new safety signals were identified, according to Genentech.