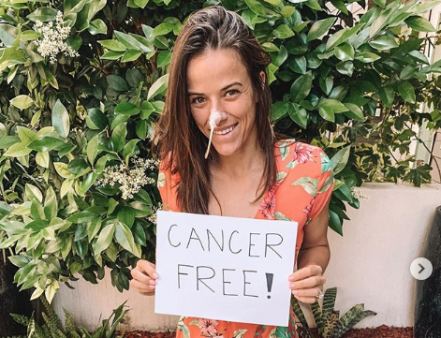 She’s the 13th person recorded to have a rare cancer known as microcystic adnexal carcinoma.

In April, professional tennis player Nicole Gibbs was diagnosed with cancer during a routine dentist appointment. Now, the 26-year-old, who is ranked 138th among female players in the world, is making her comeback to the court and sharing her story with ESPN.com.

The new dentist she was visiting noticed a small growth on the roof of her mouth and—unlike her previous dentist and primary care doctor, both of whom had seen it and dismissed it as a common bone growth—encouraged her to get a biopsy. The next day, an oral surgeon took a sample of the growth and sent it to a pathology lab for a diagnosis. Almost a week after her initial dentist appointment, she received the call that her growth was cancer.

“It felt like my biggest fear came true,” Gibbs said. “Since a very young age, I had been terrified about getting cancer. I almost started to question myself, like, had I manifested this with my anxiety about it? Did I bring this upon myself somehow by being so concerned about it?”

Gibbs was diagnosed with mucoepidermoid carcinoma, the most common type of salivary gland cancer and usually low grade. Surgery was scheduled for May 17. Her surgeon believed it would take her only four to six weeks to recover, allowing her enough time to try to qualify for Wimbledon in June.

But the procedure didn’t go as planned. So much of the tumor had been removed during the biopsy that surgeons couldn’t locate it, leading them to cut further and wider into her mouth. Other complications kept her in the hospital much longer than expected.

Update: 3 days post op I am still in the hospital with a feeding tube. Pain comes and goes in waves but has largely been manageable. If all goes smoothly, I will try to drink water for the first time tomorrow, and should be discharged by Wednesday. Thank you to my sweet friends and family for the lovely room decorations and care packages ????. We’re almost through the worst of it!! #evictrufus #boybye

Then came news that shocked Gibbs. She didn’t have mucoepidermoid carcinoma after all but microcystic adnexal carcinoma, which Medscape defines as a “rare, malignant appendage tumor commonly classified as a low-grade sweat gland carcinoma that typically occurs on the head and neck, particular the central face.” Only 12 cases had previously been recorded, making Gibbs, in her own sarcastic words, “lucky No. 13.”

“While that didn’t change the treatment much, it did mean the cancer had a greater risk of being elsewhere in my body,” she said. “It has the potential to travel aggressively along nerve pathways.” But fortunately, a PET scan had shown no signs of cancer elsewhere. She remained on a feeding tube for a total of three and a half weeks after another setback.

SWIPE ➡️ for full update! *S/O to @jackdbrody for encouraging me to pose for this pic even though I wasn’t feeling it at the time. (it’s been 14 days since my last real meal, and I’m definitely looking forward to being able to eat again ????). He said that even though things aren’t perfect right now, I have to celebrate the victories along the way. And being cancer free is a REALLY big one! So thankful for all the support - we will get there one day at a time! #fight ❤️*

In July, Gibbs returned to tennis and recently competed in a tournament. She made it to the championship match and, despite losing, was proud of her progress. She still can’t drink too much water because it will come out of her nose (the result of a stitch that had been “blown open,” she says), but doctors hope the hole in her mouth will heal on its own in the next few months so she won’t require another surgery.

It’s hard to imagine that, 6 short weeks ago, I was prepping for surgery. Today, my @usopen prep is already well underway. So excited to keep building and working towards making a splash in NYC ????.

Although having cancer was often debilitating and scary, Gibbs concluded, “It weirdly turned into a dream-come-true diagnosis because it made me confront so many things in my life.” It’s a win in her book, she says, because she’s back on her feet so soon after her diagnosis and appreciating every moment.

For related coverage, read “NFL’s  James Conner Was Told ‘You Got About a Week’ After Cancer Diagnosis.” To learn more about oral cancer, click here.