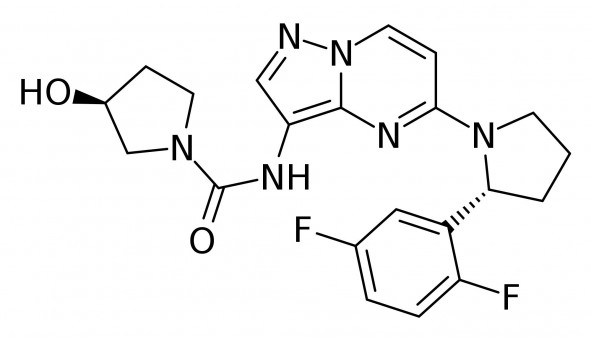 A Test, a Targeted Drug, and a Lengthened Life for Cancer Patient

TRK fusions occur in less than 1 percent of cancers—but when treated with larotrectinib, patients have seen dramatic results.

When Acra Samuels flew from Montana, to be examined at Dana-Farber in 2016, her colon and liver were dotted with recurring tumors that seemed unstoppable. One doctor had forecast she had no more than six months to live.

While Samuels recovered in the hospital, George Demetri, MD, director of Dana-Farber’s Center for Sarcoma and Bone Oncology, asked Michael Nathenson, MD, to order a DNA sequencing test of her tumor, which appeared to be a sarcoma—a cancer of soft or connective tissue—but whose exact type wasn’t immediately clear.

“I thought she might have a TRK fusion tumor,” relates Demetri. Cancers with TRK fusions—a specific type of genetic abnormality that drives their growth—are rare, but often respond to a new class of designer drug, including one called LOXO-101, or larotrectinib, that specifically targets the TRK fusion protein, turning off the molecular pathway that allows TRK fusion cancers to grow.

Demetri’s hunch was correct: her tumor harbored a TRK fusion. To Samuels, “it was like God answered a prayer,” she said recently during a regular visit to Dana-Farber along with her husband, Chris. They run a vacation rental business in Big Sky, a ski and recreation community in southwestern Montana.

Samuels began taking the LOXO-101 oral drug two weeks after she left the hospital, where she had lost 25 pounds.

“It was amazing,” she says. She was able to eat and put on weight, had more energy, and scans showed dramatic shrinkage of the remaining tumors in her abdomen. “She had a spectacular response that lasted seven months,” says Demetri.

Then, as often happens when cancers are treated with targeted drugs, Samuels’ tumors developed resistance to LOXO-101 and in June 2017 scans revealed the tumors were growing rapidly within her pelvis and abdomen. Fortunately, a next-generation drug had been developed in anticipation of resistance to LOXO-101. Samuels became only the fifth patient in the world to take the new drug, LOXO-195, and within a few weeks the tumors shrunk.

“It’s holding her disease at bay,” says Demetri. Samuels says she “feels great” although one growing tumor in her pelvis was surgically removed in late April.

Dramatic responses like this to drugs targeting TRK fusions were reported in an article in The New England Journal of Medicine in February that drew on three clinical trials involving 55 patients—pediatric and adult—who had more than a dozen diverse types of cancer found to be driven by the TRK abnormality. They included cancers of the salivary gland, thyroid, colon, and lung; infantile fibrosarcoma; melanoma, gastrointestinal stromal tumor (GIST) and other soft tissue sarcomas.

Treatment with LOXO-101 shrank tumors in 75 to 80 percent of the patients, according to the report; 71 percent of the responses were ongoing at one year, and the median duration of response and progression-free survival had not been reached. At the time of analysis, 86 percent of patients remained on the drug or had undergone surgery intended to cure the cancer. The Dana-Farber/Harvard Cancer Center consortium has several authors on the study from both pediatric and adult oncology.

Although present in a wide variety of cancers, TRK fusions are rare, occurring in less than 1 percent of cancers, making them an “orphan molecular entity,” according to an editorial accompanying the report. The study raises the question of which patients should undergo sequencing tests to detect a TRK fusion.

“It’s a real conundrum. You don’t know where this abnormality may be hiding,” notes Demetri.

The editorial concluded that to meet the challenge of these orphan molecular entities, “the oncology community must pursue innovative trial designs, implement new biotechnologies for diagnosis, and radically change the current pathways of care.”

For Acra Samuels, the fact that Demetri suspected the possibility of a TRK fusion in her tumors and ordered the test—leading to treatment with the inhibitor drug—has almost certainly extended her life significantly.

“I have three sons, ages 15, 18, and 20,” she says. “My goal when I was diagnosed was to live and raise my boys and see them all graduate from high school. The youngest one will graduate in two years—and I hope to see that.”

This article was originally published on June 7, 2018, by Dana-Farber Cancer Institute. It is republished with permission.