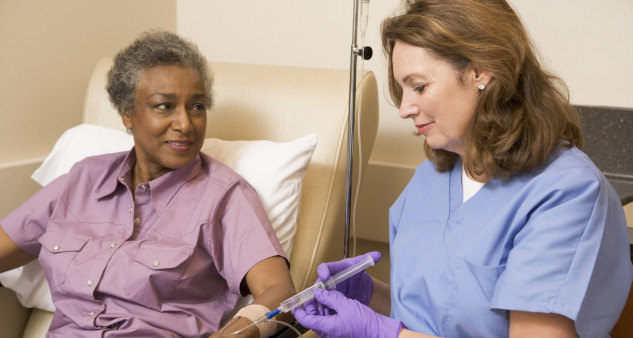 UC San Francisco is collaborating with the nonprofit Lazarex Cancer Foundation on a three-year study to identify ways to improve cancer clinical trial participation among medically underserved populations, including low-income individuals and racial and ethnic minorities.

The trial will launch this month at UCSF, followed by the University of Southern California and then rolling out to other sites nationwide.

The study aims to increase trial enrollment, access and minority participation by determining the most significant financial barriers for enrollment and identifying ways to mitigate them. The study will enroll 250 patients across UCSF Health and USC in the first year.

“Precision medicine comes at a cost – and these costs can be direct, such as scans, tumor sequencing and drugs, or indirect such as transportation, lodging, parking and tolls,” said Hala Borno, MD, a UCSF assistant professor of medicinal oncology who is leading the study.

“UCSF and Lazarex recognize that the indirect costs of therapy can be considerable, even unacceptable,” Borno said. “We know from looking at population-level data from cancer registries that certain tumors disproportionately affect racial/ethnic minority groups. As a practicing oncologist and researcher, I worry that if our clinical trial participants do not, at a minimum, reflect the patients we treat, we can do more harm, and even widen present day cancer disparities.”

Clinical treatment and medical products are safer and more effective when diverse populations are included in the research, but low racial and ethnic participation has been a longstanding concern across the United States, despite efforts over the last two decades to increase participation.

Fewer than 5 percent of adult cancer patients participate in clinical trials as a whole, studies show, with ethnic and racial minorities enrolling at even lower rates, despite a requirement by the National Institutes of Health that they be represented in clinical research. While white participants compose an estimated 83 percent of overall clinical trial participants, racial and ethnic minorities – particularly African Americans – bear the highest cancer burden in the U.S.

Socioeconomic concerns often play a major role: Financially disadvantaged patients may live significant distances from study sites and lack the resources to pay for travel, child care and time off work. As a result of this chronic under-enrollment, the discovery of potentially life-prolonging therapies may be delayed and patients may miss promising treatments.

Borno, who specializes in the management of advanced urologic malignancies, such as prostate, kidney, bladder and testicular cancer, treats patients at the UCSF Helen Diller Family Comprehensive Cancer Center.

The study, known as IMPACT (Improving Patient Access to Cancer Clinical Trials), is open to all adult patients with solid or hematologic malignancies who are being considered for enrollment in a cancer treatment clinical trial at UCSF or USC. They will be informed about clinical trial opportunities and reimbursed along with a companion for travel expenses to trial sites. Patients referred to UCSF by affiliates and partners are also eligible. To encourage clinical trial diversity, information will be available in multiple languages to reflect the local population.

Investigators will assess the effectiveness of a sliding scale financial reimbursement program to improve racial and ethnic minority participation, covering additional costs for participants who earn up to four times the poverty level and smaller percentages for those with household incomes up to 700 percent of poverty ($84,980 for an individual).

“This study and the contribution of Lazarex focus on one of UCSF’s key pillars, which is health equity,” said Alan Ashworth, PhD, FRS, president of the UCSF Helen Diller Family Comprehensive Cancer Center. “It is only when many different populations participate in clinical trials that we will fully understand what causes cancer on a fundamental level and understand why individuals respond differently to both the disease and to therapies.”

“At USC, Lazarex has provided the financial reimbursement program for several years, contributing significantly to disadvantaged research participants,” said Darcy Spicer, MD, chief of medical oncology at the USC Norris Comprehensive Cancer Center. “We are excited to further opportunities for such individuals and to study the impact.”

The founding principle of Lazarex Cancer Foundation, based in Danville, Calif., is that everyone – regardless of age, gender, race, or financial status – should have access to cutting-edge treatments available through clinical trials. As part of its work, the nonprofit coordinates NeighborGood, a community outreach program that raises awareness about clinical trials. Since 2007, more than $14 million has been spent on program services.

“By offering reimbursements through IMPACT, patients can say ‘yes’ to participating in clinical trials,” said Lazarex founder and board chair Dana Dornsife. “Consequently, clinical trials see increased patient enrollment and minority participation, and patients are better able to stay the course of the trial. That leads to an improved chance the trial will successfully complete and potentially help shepherd new therapies faster through the drug development pipeline and into cancer clinics.”

This article was originally published on April 15, 2019, by the University of California, San Francisco, News Center. It is republished with permission.