November 19, 2021 • By Rachel Sauer at the University of Colorado Cancer Center

Janice Woodward was already a member of the club nobody wants to join — the cancer club, membership involuntary — when she got an irregular mammogram result in May 2019.

Ten years previously, in her mid-50s, Woodward had survived ovarian cancer and a surgical treatment that removed a 10-pound tumor from her lower abdomen. This time, though, she would need not only two surgeries, but radiation to treat the breast cancer with which she was diagnosed.

It was before one of those radiation treatments that some wires got crossed regarding her appointment. But she got ready anyway, got into her gown, and wandered up to the clinic’s nursing station desk “because I just can’t be self-conscious about things like that anymore,” she recalls with a laugh.

That’s where she made a discovery that helped her make some profound changes for the better: On the nursing station’s desk, she saw a flyer for the BfitBwell program in the University of Colorado Cancer Center.

A three-month individualized fitness program for people who are currently receiving or recently completed treatment for cancer, BfitBwell provides evidence-based, cancer-specific exercise training with the goal of not only increasing functional capacity, but improving an individual’s overall quality of life. The program is based in the CU Anschutz Health and Wellness Center and operates in partnership with the CU Cancer Center.

BfitBwell helped Woodward feel at home in her body again, especially after the unexpected exhaustion that steadily grew through her radiation treatments. Her experience in the program was so meaningful to her that after completing the three months in BfitBwell, she became a program benefactor.

“I wanted to pay it forward,” she explains. “It was such a positive experience, and no one treats you like, ‘Oh, poor cancer patient.’ They treat you like a person who is working out. There’s no pity, none of that, and I think that everyone who receives a cancer diagnosis deserves to experience that.”

Helping cancer survivors get their lives back

The desire to support people going through cancer treatment as they navigate changes in their bodies was the genesis for BfitBwell in 2013, says John Peters, PhD, who created the program with former CU Cancer Center member Tom Purcell, MD, MBA. It has now graduated more than 750 participants.

“The notion was that there isn’t anything in terms of exercise for cancer patients like there is for cardiac patients — a program to support you getting back on your feet,” Peters says. “Cancer treatment can be pretty awful — it could be surgery, it could be radiation, chemotherapy. Those knock you down pretty hard, and then when you’re done you get a handshake and ‘good luck.’

“Our vision has always been that exercise is just as valuable for cancer survivors as it is for cardiac survivors — something to help them build back their strength and get their own life back.”

The program also is designed to contribute to the growing body of research relating to cancer treatment and exercise. Ryan Marker, DPT, PhD, assistant professor of physical medicine and rehabilitation in the CU Rehabilitation Sciences PhD program, leads assessments and research on the program’s measurable benefits and manages the registry of data for all participants.

The BfitBwell program aims to balance scientific, evidence-based approaches to exercise and wellness with a human touch that helps people who have received a cancer diagnosis to navigate unfamiliar and often scary new paths.

“So many patients are just thrown into the realm of cancer upon diagnosis,” says Nicole Gleason, CCES, CPT, BfitBwell program manager. “It’s bam bam bam, and they’re just given this treatment calendar. This is something they have control over; this is something they can say, ‘I want to do this for myself.’”

For Pattie, a former BfitBwell participant who also became a program benefactor, the journey began with the discovery of a polyp after feeling that something just wasn’t quite right.

“I’ve always been active, always been a runner, so I pay attention to how I’m feeling, and I knew that post-menopausal bleeding wasn’t normal,” she says, explaining why she made an appointment with her gynecologist.

An ultrasound revealed the polyp, and a biopsy returned a diagnosis of endometrial cancer.

“I was completely devastated,” Pattie recalls. “You never want to hear that.”

She had a hysterectomy and received radiation treatments, and it was while working with radiation oncologist Christine Fisher, MD, a CU Cancer Center member, that she heard about BfitBwell.

“I thought BfitBwell was for someone who maybe hasn’t exercised, but I called them anyway and said, ‘I don’t know if I even qualify for this,’ but they were so nice and said, ‘Absolutely, it’s for you, come in and we’ll do an assessment,’” Pattie recalls. “Honestly, I wasn’t sure what they could teach me. I’ve exercised my whole life. But boy was I wrong. I really needed them.”

An aspect of the program she especially appreciated was that “they didn’t start me off like I can’t do anything,” she says. “They started me off right in the middle and pushed me much more than I was pushing myself. They talk to you, they support you where you are, they’re always there. They truly helped me.”

The experience, Pattie says, was life-altering, which is why she decided to become a program benefactor and include the BfitBwell program in her estate plans. Being able to support a program from which she gained so much, she says, is an important way to ensure the program can continue for those who will benefit from it just as much.

Individualized experiences for each participant

For each program participant, the journey through BfitBwell is individualized; no two experiences will be the same, Gleason says. Throughout the COVID-19 pandemic, the program adapted and added online components so participants can work out at home if that’s their preference.

“We do an initial evaluation or assessment, which is pretty crucial for us to understand where one’s starting point is,” Gleason explains. “A lot of individuals don’t even recognize where their start point is. Their mindset may be, ‘I used to do this, this, this, and don’t know how much might be too much.’ That initial assessment is so important and helps us have a safe starting point.”

Participants then do individualized workouts with trainers who have specific training in working with people undergoing treatment for cancer.

The program is for people currently going through treatment for cancer and those who are six months or fewer past the end of their treatment, Peters explains. The first month focuses on one-on-one training, helping patients establish safe and effective movement patterns, and becoming familiar with exercise equipment.

The second and third months focus on working through individualized programs in small-group settings, which helps participants build a sense of autonomy and familiarity with the equipment, exercises, and overall fitness environment.

BfitBwell dedicates particular focus to resistance movements rather than aerobic exercise, Peters explains, “because we want to help participants understand how their bodies work and what are the most important muscles they’re going to need to live the life they want to live,” he says. “We want to have that understanding of how this exercise relates to what you’re going to do in real life — how do you lift up your grandchild without breaking your back? How do you squat to pick something up?”

Some people going through treatment for cancer, or who have recently completed it, may feel hesitant to participate in BfitBwell because they didn’t exercise much before their diagnosis, Gleason says. Others may hesitate because they’re so sapped of energy from treatments, or because their prognosis isn’t good.

“There’s a level of investment with our trainers, and they do a lot of deep listening with participants, focusing on the individual,” Peters says. “Ultimately, they’re coming from a place of working to help each person feel better, feel more in control of this aspect of their lives during a time when a lot of things feel out of their control.”

For Woodward, who has exercised her whole life, the loss of control manifested in the growing fatigue she felt as she progressed through her radiation treatments. There were times when she went for a walk in her neighborhood and worried she wouldn’t have the energy to get home.

However, she says, the adaptability of the BfitBwell program and the personalized work she did with trainers meant that even on days when she started the workout depleted of energy, she somehow ended up gaining it.

“What was reaffirming to me, and I think to everyone, is you do get stronger, no matter where you came in,” she says. “They take the time to get to know you, so they can push you in a way that’s motivating.”

She says the educational component was especially helpful, learning the names of certain movements, how to do them, and how to create her own workouts.

Perhaps just as important, though, was the camaraderie with other participants as well as with the trainers. Woodward says she benefitted as much from the emotional and social support, and from the friendships she made, as she did from learning how to correctly do challenging moves with progressively heavier weights. It’s why she decided to become a donor.

This article was originally published on November 8, 2021, by the University of Colorado Cancer Center. It is republished with permission. 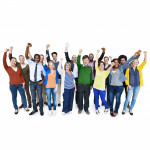 How Many Cancer Survivors Are There in the U.S.?