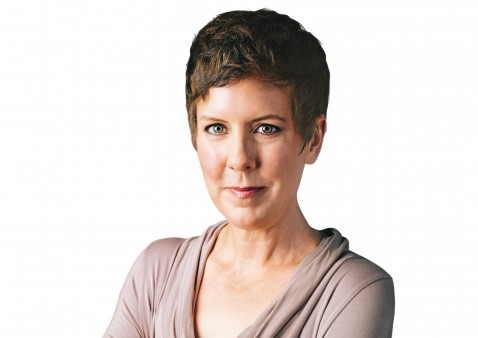 Why I Went Flat

When asked to write 500 words on why I went flat after breast cancer—that is, why I chose not to have reconstructive surgery after a double mastectomy—I assumed the task would take 15 minutes. I’d spun a 90,000-word yarn on the topic, to be published as a book in October. A few hundred words would be a throat clearing.

But my fingertips worried the why like a beach pebble in my palm. The word stirred the memory of a friend calling from London on the eve of my surgery to lament, “But why?” Those two words surged across the Atlantic and sucked sand from beneath my feet and air from my lungs. But in the eight years since, I’ve built a stalwart seawall upon which I can gut the question.

It started with the young plastic surgeon’s Brazilian accent, his eagerness to apply what he’d been taught about how to right breast cancer’s wrong.

I waited to hear the word lumpectomy. I remember how my feet dangled from the exam table like a child’s, the way my fingers curled around the table’s padded edge. But when the word came, he said a lumpectomy would decimate my breast.

At age 28, I’d had a tonsillectomy—a precise surgery to cut out diseased tissue. At age 38, faced with a cancerous lump, I’d naively envisioned something similar. A scalpel’s slice that would carve the lump from my small breast as cleanly as my mother nicked eyes from Idaho potatoes.

But back in the sickly light of the exam room, decimate hung in the air, a word meant to convey total destruction. The surgeon explained that because of my body’s shape and size, my only option was a mastectomy and a reconstructive surgery that involved an implant and a back muscle.

He sketched out how he would carve apart the largest muscle in my back. With one end of the muscle connected to its blood supply, the harvested flesh would be pulled through the empty socket on my chest and placed over a silicone implant. I saw a steak laid over a tennis ball.

“But isn’t that muscle doing something?” I asked.

To which he answered, “You’ll look normal in clothes; that’s all most women want.”

My favorite yoga pose was handstand. Planting my palms on the earth, hugging my upper back muscles along my vertical axis and kicking my legs to the sky made me feel invincible in a world where everything told me the opposite. And there was nothing normal about me.

Not being a risk-taker, handstands had not come easily. Ten years of practice is what it took to trust my body, my strength, my intuition. I was not about to throw that away for the chance to feel something I knew I wasn’t.

Breasts are beautiful, but for me, the price was too high. I loved my breasts, but I didn’t love them enough to sacrifice a back muscle on the altar of normative femininity. Eight years later, I mourn my breasts and savor my strength.