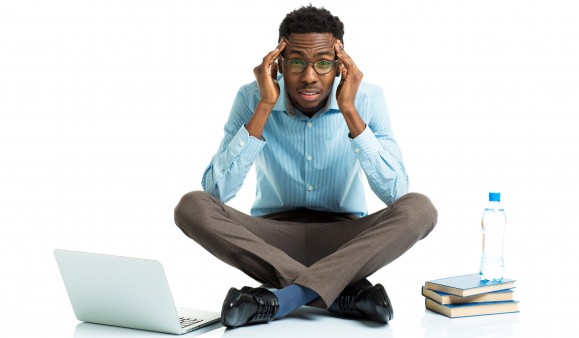 Without Context or Cushion, Do Online Medical Results Make Sense?

Are portals delivering on their promise—or are results too often a source of confusion and alarm?

As she herded her two young sons into bed one evening late last December, Laura Devitt flipped through her phone to check on the routine blood tests that had been performed as part of her annual physical. She logged onto the patient portal link on her electronic medical record, scanned the results and felt her stomach clench with fear.

Devitt’s white blood cell count and several other tests were flagged as abnormal. Beyond the raw numbers, there was no explanation.

“I got really tense and concerned,” said Devitt, 39, a manager of data analysis who lives in New Orleans. She immediately began searching online and discovered that possible causes ranged from a trivial infection to cancer.

“I was able to calm myself down,” said Devitt, who waited anxiously for her doctor to call. Two days later, after hearing nothing, she called the office. Her doctor telephoned the next day. She reassured Devitt that the probable cause was her 5-year-old’s recent case of pinkeye and advised her to get tested again. She did, and the results were normal.

“I think getting [test results] online is great,” said Devitt, who says she wishes she had been spared days of needless worry waiting for her doctor’s explanation. “But if it’s concerning, there should be some sort of note from a doctor.”

Devitt’s experience illustrates both the promise and the perils of a largely unexamined transformation in the way growing numbers of Americans receive sensitive — sometimes life-changing — medical information. A decade ago, most patients were informed over the phone or in person by the doctor who had ordered testing and could explain the results.

But in the past few years, hospitals and medical practices have urged patients to sign up for portals, which allow them rapid, round-the-clock access to their records. Lab tests (with few exceptions) are now released directly to patients. Studies estimate that between 15 and 30 percent of patients use portals.

The push for portals has been fueled by several factors: the widespread embrace of technology, incentive payments to medical practices and hospitals that were part of 2009 federal legislation to encourage “meaningful use” of electronic records, and a 2014 federal rule giving patients direct access to their results. Policymakers have long regarded electronic medical records as a way to foster patient engagement and improve patient safety. Studies have found that between 8 and 26 percent of abnormal lab results were not communicated to patients promptly.

Are portals delivering on their promise to engage patients? Or are these results too often a source of confusion and alarm for patients and the cause of more work for doctors because information is provided without adequate — or sometimes any — guidance?

Releasing results on portals remains “an answer with many questions,” said Hardeep Singh, a patient safety researcher at the Michael E. DeBakey VA Medical Center in Houston. “There is just not enough information about how it should be done right,” said Singh, who is also an associate professor at Baylor College of Medicine and one of the few researchers to study patients’ experiences obtaining test results from portals. “There are unintended consequences for not thinking it through.”

Although what patients see online and how quickly they see it differs — sometimes even within the same hospital system — most portals contain lab tests, imaging studies, pathology reports and less frequently, doctors’ notes. It is not uncommon for a test result to be posted before the doctor has seen it.

That means that a patient may be the first to learn of a suspicious breast mass, a recurrence of cancer or possible kidney failure. At Johns Hopkins medical system in Baltimore, for example, results of a PSA test to screen for prostate cancer come with this disclaimer: “While Johns Hopkins providers check results frequently, you may see results before your provider has seen them.”

Breast cancer specialist Lidia Schapira is an associate professor at the Stanford University Medical Center and editor-in-chief of Cancer.net, the patient information website of the American Society of Clinical Oncology. While she regards online access as beneficial, “the danger is that the patient may learn information they’re unprepared to receive and may feel abandoned if they can’t reach their doctor.”

“Those are the Friday afternoon phone calls,” she said, when “at 4:59 [p.m.] a patient has accessed the results of a scan and the doctor signs out at 5.” The recipient of the anguished inquiry that follows is typically a covering doctor who doesn’t know the patient or details of the case.

When Is Use Meaningful?

A recent study by Singh and his colleagues found that, like Devitt, nearly two-thirds of 95 patients who obtained test results via a portal received no explanatory information about the findings. As a result, nearly half conducted online searches. Many with abnormal results called their doctors.

That echoes a 2016 study led by researchers from the University of Pittsburgh. These scientists found that in addition to engaging patients, portal use may increase anxiety and lead to more doctor visits.

Among patients with low health literacy and numerical skills, confusion about the meaning of results is common. Many tests are reported in the same form that the doctor sees them, which even savvy patients may find “literally meaningless,” observed Brian Zikmund-Fisher, an associate professor in the school of public health at the University of Michigan.

“In some situations we run the risk of patients misinterpreting that there is no problem when there is one, or assuming there’s a problem when there isn’t,” said Zikmund-Fisher, lead author of a study that advocates the use of explanatory graphics to convey results. “What we need to be focusing on is giving patients context.”

A year or so ago, Geisinger Health System in Pennsylvania began making most test results — but not biopsies or HIV screening — available to patients within four hours of being finalized.

“We essentially release results twice a day seven days a week with a four-hour lag,” said Ben Hohmuth, Geisinger’s associate chief medical informatics officer. The delay, he said, gives doctors time to review results. Patients who log on over a weekend can contact an on-call physician if they can’t reach their own doctor. The goal of rapid release, Hohmuth said, is to “be patient-centered and transparent.”

“The majority [of patients] want early access to their results, and they don’t want it to be impeded” while waiting for doctors to contact them, Hohmuth said, even if the news is bad.

Patient reaction, he adds, has been “overwhelmingly positive”; the few complaints have come from physicians.

Health lawyer Kathleen Kenyon said she would have appreciated faster access to blood test results for her elderly mother, who had multiple medical problems including Alzheimer’s disease. Kenyon, who managed and closely monitored her mother’s condition, said she believes speedier access could have helped stave off a four-day hospitalization in the intensive care unit of a Washington hospital caused by her mother’s plummeting sodium level.

“It is safer for patients to have more information,” said Kenyon, formerly a senior policy analyst at the Department of Health and Human Services. “I was begging them to get my mother’s lab information in earlier.”

What Does This Mean?

At 46, writer Rebecca Esparza has survived Stage 4 ovarian cancer as well as thyroid cancer. She normally loves having round-the-clock access to her records and the ability to email her doctors.

But in 2016, immediately after extensive abdominal surgery at a hospital several hours from her home in Corpus Christi, Texas, doctors told her they suspected she had developed colon cancer. Confirmation would require further evaluation by a pathologist.

Esparza went home and waited, checking her portal repeatedly. A week later, she logged on to find a highly technical biopsy report she could not understand. A friend who is a nurse read it and told Esparza there was no mention of a malignancy. Two weeks after Esparaza left the hospital and a week after the report appeared on her portal, one of her doctors confirmed that she didn’t have cancer after all.

“It was really traumatic and the one time I wish I hadn’t had access,” said Esparza, an advocate for the National Coalition for Cancer Survivorship.

Although Esparza considers her experience to be “a fluke,” she notes similar confusion among other cancer patients in the online support groups she runs.

“People post their blood test and other results all the time and ask what it means,” she said. Esparza said she intercedes by reminding participants “we’re not doctors.”

One way for a physician to provide guidance, said Stanford’s Schapira, is for doctors to negotiate with patients in advance, particularly if they are concerned the news might be bad.

It is a strategy she employed at her previous job at Massachusetts General Hospital in Boston. “I would say, ‘Let’s do a scan and then schedule a visit two days later, and we can discuss the results,’” she said.

Mass General internist Katharine Treadway knows what it’s like to obtain shocking news from an electronic medical record. The experience, she said, has influenced the way she practices.

More than a decade ago — long before most patients had portals — Treadway, with her husband’s permission, pulled up the results of his MRI scan on a hospital computer while waiting to see the specialist treating his sudden, searing arm pain.

“It showed a massive tumor” and widespread metastatic disease, Treadway recalled. She never suspected that her 59-year-old husband had cancer, let alone a highly aggressive and usually fatal form of advanced lymphoma.

Treadway said she remembers intently checking the name and date of birth, certain she had the wrong patient, then rebooting the computer several times “like I was going to get a different answer.”

“The difference is that I knew exactly who to call and what to do,” said Treadway, whose husband has been cancer-free for more than a decade. “In the event of bad news, a doctor has to surround the patient with ‘I am here for you and here’s the plan.’”

Schapira agrees. “Clinicians have to start tackling the issues that have arisen as a result of instant access,” she said.

This article was originally published on March 27, 2018, by Kaiser Health News. It is republished with permission.