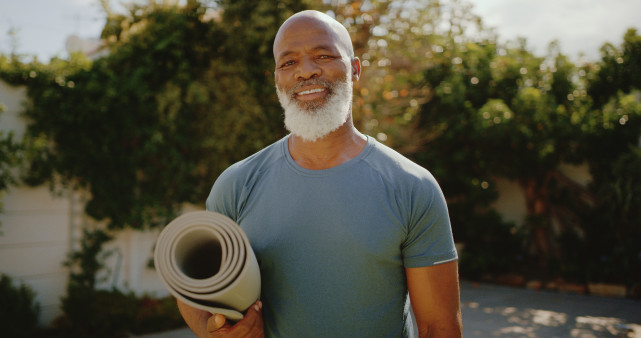 Men with newly diagnosed prostate cancer who participated in a yoga program before and after surgery reported better quality of life and showed improvement on several measures of inflammation and immune function, according to results from a randomized trial published in Nature Prostate Cancer.

“Yoga improved quality of life in men compared to the standard of care, specifically on the fatigue scale, meaning they were less tired; on sexual function; and on their functional, physical and social well-being,” Dharam Kaushik, MD, of University of Texas Health San Antonio, said in a press release.

Diagnosis and treatment of prostate cancer is associated with anxiety, fear and depression in up to a third of affected men, and research suggests that psychological stress has a negative effect on immune function, Kaushik and colleagues noted as background. Previous research has found that yoga can help people with various types of cancer, but there is a shortage of data from prospective randomized controlled trials, considered the gold standard of medical research.

To help fill this gap, Kaushik’s team designed a pilot study (ClinicalTrials.gov NCT02620033) to evaluate a yoga therapy program for men newly diagnosed with localized prostate cancer who were scheduled for radical prostatectomy (surgical removal of the entire prostate gland). The participants were randomly assigned to take part in a yoga program before and after surgery (14 men; median age 56 years) or standard care (15 men; median age 60 years). Men who already practiced yoga or meditation were excluded from the study.

Those in the yoga group participated in Hatha yoga sessions led by certified instructors, practicing for 60 to 75 minutes at least twice a week. They also practiced breathing exercises and pelvic floor engagement during seated meditation. The program ran for six weeks before surgery and six weeks after surgery, starting three to six weeks after the operation. The yoga program was developed specifically for prostate cancer patients by Kaushik, the Thrivewell Cancer Foundation and a local yoga studio.

The primary outcome was self-reported quality of life using questionnaires that ask about aspects such as physical functioning and fatigue. This was assessed at baseline before starting the yoga program, immediately prior to surgery and six weeks after surgery. In addition, the researchers collected blood samples to measure changes in immune cells and biomarkers of immune function and inflammation. Results were previously presented at the American Urological Association annual meeting in September.

Men who participated in the yoga program had higher quality-of-life scores, with the greatest benefit seen on questionnaires assessing functional wellbeing (mean difference of 8.6 points), physical wellbeing (5.5 points), social wellbeing (14.6 points), sexual function (8.5 points) and fatigue (6.3 points). Although most of the differences did not reach the threshold for statistical significance in this small study, the researchers said they reflect meaningful improvement. The men were motivated to practice yoga before surgery but less so afterward, the researchers noted.

“Our present findings indicate that yoga improves quality of life, generates a robust immune response, and attenuates expression of key inflammatory cytokines in men with newly diagnosed prostate cancer,” the study authors concluded. “Larger-scale studies are needed to replicate these results. Future studies should incorporate a translational component to clarify the mechanism via which yoga improves quality of life and examine the effects of yoga on progression and recurrence of prostate cancer.”

“This is positive data and further large-scale studies are needed, for which this pilot study can be a model,” Kaushik said. “If we are able to encourage patients to do a small, inexpensive and easy-to-implement intervention that can have a big impact, then why not?”

Click here to read the full study.
Click here for more news about quality of life for people with cancer.