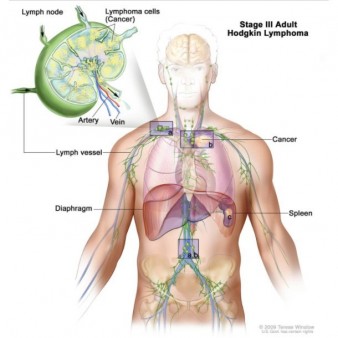 New treatment may replace chemotherapy drug that can cause lung damage.

The Food and Drug Administration (FDA) has expanded the approved uses for the drug brentuximab vedotin (Adcetris) in people with Hodgkin lymphoma. Under the new approval, announced on March 20, brentuximab can be used in combination with three other chemotherapy drugs as an initial, or first-line, treatment in patients with advanced disease.

The approval was based on results from a phase 3 clinical trial called ECHELON-1. In the trial, patients with Hodgkin lymphoma who were treated with brentuximab and the chemotherapy drugs doxorubicin, vinblastine, and dacarbazine (AVD)—together called A+AVD—had a modest improvement in how long they lived without their cancer progressing (progression-free survival) compared with patients who received the current standard therapy.

Current standard therapy for advanced Hodgkin lymphoma consists of four chemotherapy drugs: AVD plus the drug bleomycin (ABVD). Bleomycin can have serious side effects, including damage to the lungs, explained Christopher Melani, M.D., of NCI’s Center for Cancer Research.

“The lung toxicity from bleomycin is a feared side effect of the drug, especially for older patients, who are at higher risk of developing this complication,” said Dr. Melani. Therefore, the approval of A+AVD offers an important treatment alternative for patients who may be unable to tolerate bleomycin, he commented.

Brentuximab is a type of drug called an antibody–drug conjugate. The antibody part of the drug recognizes a protein called CD30, which is found on classical Hodgkin lymphoma cells (called Reed-Sternberg cells). When the antibody binds to these cancer cells, it delivers the drug portion of brentuximab: a toxin that clogs up the machinery of cell division, leading to cell death.

Since brentuximab is directed specifically at cancer cells that express CD30, researchers hoped that it might be less toxic than bleomycin, which can kill any type of dividing cell, including those in the lungs.

Brentuximab had previously been approved by FDA to treat patients with Hodgkin lymphoma whose disease has not gotten better after a stem cell transplant or, in people who cannot have a transplant, after two or more treatments with combination chemotherapy.

Unlike most cancers, Hodgkin lymphoma occurs more often in younger people than older people. The ECHELON-1 trial enrolled 1,334 patients from 21 countries, with an average age of 36. However, 14% of participants were age 60 or older. The trial was funded by Millennium Pharmaceuticals and Seattle Genetics, the makers of brentuximab.

The participants were randomly assigned to receive either standard therapy or the brentuximab combination. The primary endpoint of the trial was a modified form of progression-free survival (defined as time to disease progression, death, or an incomplete response to treatment followed by additional cancer therapy).

After a median follow-up of about 2 years, modified progression-free survival was higher in the brentuximab group than in the standard therapy group (82% versus 77%).

Patients treated with brentuximab also had a 27% reduced risk of dying during treatment or the study’s follow-up period.

Although the improvement in modified progression-free survival was modest given the small number of patients who progressed or died overall, Dr. Melani commented, brentuximab with AVD was associated with substantially less lung toxicity.

Peripheral neuropathy occurred in more patients in the brentuximab group than in the standard therapy group (67% versus 43%). However, the majority of cases were not severe and most patients saw their neuropathy lessen or disappear after treatment ended.

A Viable Option for Hodgkin Lymphoma

Longer follow-up will be required to determine whether the improved efficacy is maintained over time and to rule out late side effects, wrote Dan Longo, M.D., of the Dana-Farber Cancer Institute and Vincent DeVita, Jr., M.D., of the Yale Cancer Center, in an editorial that accompanied the ECHELON-1 results. Nevertheless, they continued, “it appears that the addition of brentuximab vedotin to AVD … merits consideration as first-line treatment for advanced Hodgkin’s lymphoma.”

For younger patients with newly-diagnosed advanced Hodgkin lymphoma and without lung disease, ABVD will likely remain the standard of care for now, said Dr. Melani.

“Most young patients do well with ABVD, and there’s ample prior experience with this regimen,” he said. Standard therapy with ABVD may also be a better treatment option for patients with pre-existing peripheral neuropathy or low blood counts who may not tolerate the addition of brentuximab, he added.

But for older patients or those with pre-existing lung disease, Dr. Melani said that the approval of the brentuximab combination “is already affecting treatment decisions in the clinic.”

This article was originally published on the National Cancer Institute website on April 17, 2018.