Cancer, COVID-19, Eyesight Advocacy, and The Police’s “Message in A Bottle”

Without treatment for escalating nuclear cataracts in both eyes, I would be legally blind in six months and stone blind in 12 months.

Twitter
Facebook
Pinterest
Tumblr
Email
Advertisement
On the very day that the government announced the cancellation of all elective procedures, 17 March 2020, I was given my PET CT results – my cancer is back in my pelvic sidewall.  Anxiously, amid the confusion and fear surrounding the virus and the shutdown, I strove to connect with doctors.  My plight attracted some media attention, as the world reeled from the terrors of this lethal pandemic.  So much was unknown.

In the first weeks of the lockdown I struggled through various obstacles to get the procedures I would need prior to chemotherapy.  I needed to get my failing portacath replaced, and to find a GI specialist willing to dilate a GI stricture.  It took considerable calling, intervention from government insiders, and dogged persistence to get past the terrifying “we are closed” voice message at the end of every telephone line.

My 25 March cataract surgery was cancelled.   My eyesight was rapidly failing due to escalating nuclear cataracts in both eyes.  Without treatment, I would be legally blind in six months and stone blind in 12 months.   Chemotherapy could compromise eye surgery outcomes.  But so focused was I on getting cancer treatment, I gave up on my vision in despair.   Then, in my grief, I tweeted about it: 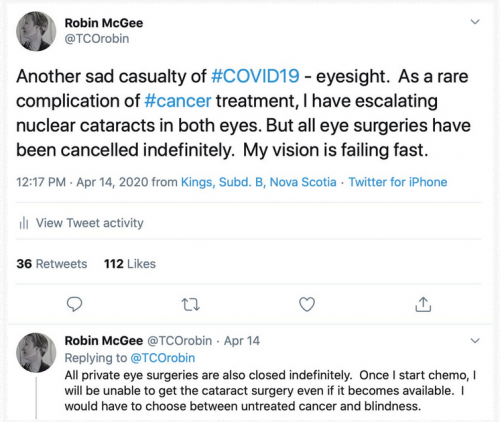 Within hours, I received supportive responses from Twitter all over the world.   Every major media outlet contacted me, with stories from The Globe and Mail, CBC, and CTV National News.  Local news and radio also covered it.   Facebook followers mounted an email campaign to our provincial office of Public Health and CEO of the provincial health authority (NSHA), asking if I could be an exception to the ban on cataract surgery.

One advocate emailed a private opthamologist and encouraged me to email him too.   I knew his clinic was closed, but in a moment of throwaway despair, I emailed him anyway, believing I was crying into the void.  How surprised was I when he called me at home the next day!  He was concerned and compassionate, but told me due to the public health ban he was powerless to help me.

But his personal contact encouraged me.  It gave me the idea that perhaps the government would allow an exception if I went with a private clinic, thereby avoiding using provincial resources.   This became the “ask” of the many emailers, tweeters, and others trying to advance my miserable and seemingly lost cause.

The famous national radio show CBC’s White Coat Black Art reached out. In the Before Times, I was slated to speak to WCBA about medical error and apology practice.  But the pandemic had swept all that aside.

Show host Dr. Brian Goldman and his team were moved by my plight, and constructed an episode around me and others denied critical care.  The in-depth interviews he conducted were empathic and thoughtful, sensitively capturing my emotional distress.   They underscored the parallel between my current advocacy and the fight described in my book The Cancer Olympics for best-practice chemotherapy 10 years ago.  The show called the NSHA for a statement just as my case came before the CEO.

It worked. The CEO sent an email green-lighting my access to private eye surgery.  Dr. Lakosha of the Halifax Eye Institute booked me in right away.  CBC news celebrated. As I sit here today, both eyes have been repaired.  Blindness has been averted.  Was the sky always blue?

I still have much before me to dread.  The cancer pain has started in earnest.  I still need the stricture dilation.  And the chemotherapy I will be starting in about three weeks will be similar to the desperately harsh protocol I was on previously. And COVID-19 lurks like a menacing vulture over all of it.

And yet, I remain comforted and amazed by the outpouring of support I received.  So many people in terror of their lives and finances still had the emotional energy to reach out on my behalf.  Like the advocates in The Cancer Olympics, they rallied around me.  And just as in the past, their intervention will save others.  Several eye patients can now access desperately needed treatments – including, touchingly, the son of the nurse who assisted at my eye surgery.  He was able to get needed but delayed melanoma-related injections in his eye because of our lobbying.  How heartwarming to think that our efforts helped one of my own healthcare providers.   We truly are all in this together.

So today’s song is “Message in a Bottle,” by The Police, from their 1979 album Regatta de Blanc.  Sting has recently recorded a version from his home studio in support of healthcare workers, and that version is the one linked.  This song is about seclusion and loneliness, but also about finding solace among other people undergoing the same thing.   My husband Andrew is a tremendous support and partner in my struggles, so I am never truly alone.  But this song resonates deeply:  I sent an “an SOS to the world,” and despite their own isolation, others responded.  My vision was rescued.  Nova Scotia, heartbroken in the wake of the horrific shooting rampage, got some good news.

As Sting says, only hope can keep us together.

Just a castaway, an island lost at sea
Another lonely day with no one here but me
More loneliness than any man could bear
Rescue me before I fall into despair