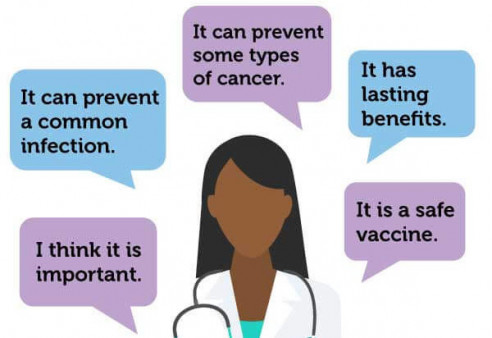 In a new study, researchers asked parents to select the best and worst reasons a doctor might give to support HPV vaccination for their kids. National Cancer Institute

In a survey, parents ranked “It can prevent some types of cancer” as the best reason for their children to receive the vaccine.

Health care providers should emphasize cancer prevention when discussing human papillomavirus (HPV) vaccination with the parents of preteens who are due to receive the vaccine. That’s the conclusion of a new study that asked a diverse group of US parents what they felt are the most compelling reasons to get their children vaccinated.

In the United States, the Centers for Disease Control and Prevention (CDC) recommends routine HPV vaccination for girls and boys starting at age 11 or 12. But in 2016, only 43% of US adolescents were up to date with the vaccine. Numerous studies have shown that this sub-optimal level of vaccine coverage is due in part to the way health care providers communicate about HPV vaccination.

CDC, the President’s Cancer Panel, and other groups recommend that providers tell parents that cancer prevention is the most important reason for HPV vaccination. But “as far as I know, this is the first published study to test and provide evidence that this is the most important message,” said Sarah Kobrin, PhD, MPH, of NCI’s Division of Cancer Control and Population Sciences, who was not involved in the study.

Results of the NCI-funded study were published in the July 2018 Cancer Epidemiology, Biomarkers & Prevention.

A research team led by Melissa Gilkey, PhD, of the University of North Carolina at Chapel Hill, conducted the online survey of 1,259 parents of 11- to 17-year-old males and females. Survey participants were 51% female and 49% male, were from all regions of the United States, and had a wide range of education and income levels.

Using a method known as “best-worst scaling,” the researchers asked parents to select the best and worst of 11 reasons that a doctor might give for a 12-year-old child to get the HPV vaccine. The researchers then combined the results from the 1,177 parents who completed the survey to come up with a ranking of all 11 reasons. The survey also included questions to assess parents’ confidence in adolescent vaccination in general.

In the overall sample, parents ranked “It can prevent some types of cancer” as the best reason for HPV vaccination.

“Parents thought this was the best reason by far, and the finding was consistent across many different types of parents,” Gilkey said.

Perhaps most notably, both parents with low confidence in adolescent vaccination and those with high confidence said that cancer prevention was the best reason. These two groups of parents also ranked the other possible reasons similarly overall, which was contrary to what Gilkey’s team had predicted.

Other reasons that parents ranked highly included “It can prevent a common infection” and “It has lasting benefits.”

Reasons that parents ranked lowest included “Your child is due for it” and “I got it for my own child.”

These reasons “aren’t necessarily bad messages,” Gilkey said, “but they do not appear to be broadly compelling to parents.”

As the study authors and outside experts noted, however, asking parents which reason for HPV vaccination they think is best is different from determining which message would motivate a parent to vaccinate in an actual encounter with their child’s doctor.

“The trust and other dynamics that exist when a person is talking to their own child’s health care provider can’t be captured in a survey [like this],” noted Rebecca Perkins, MD, of Boston University School of Medicine, an HPV vaccine researcher who was not involved in the study.

Those distinctions, between the preferences people state in a survey and what happens in the real world, Kobrin said, might explain why the study did not find a difference between parents with low versus high confidence in vaccination.

Perkins and her colleagues recently published a study that analyzed audio recordings of interactions among primary care providers, parents or guardians, and adolescents. They found that for many parents or guardians, especially those who were undecided about vaccination beforehand, a simple statement by the provider that the vaccine is “due” or “needed” was persuasive.

“Being clear that HPV vaccination and other adolescent vaccines are the standard of care is the first step when talking to parents,” Gilkey said. For those parents who have questions or want to talk more about the HPV vaccine, emphasizing the cancer message may be particularly helpful.

“That’s where studies like our survey come in,” she continued.

Researchers can use information about the most promising messages from such studies to design and test real-world interventions aimed at increasing HPV vaccination rates. Those interventions include strategies for training health care providers to improve the way they communicate about HPV vaccination.

To reach the Healthy People 2020 goal of an 80% HPV vaccination coverage level, Perkins said, “We need to focus on how to get that [prevention] message to every parent of every child who is eligible for the HPV vaccine and every provider who takes care of kids who are eligible for the vaccine.”

This post was originally published on July 10, 2018, by the National Cancer Institute. It is republished with permission.