Justin Birckbichler, of A Ballsy Sense of Tumor, surfing in Santa Cruz, Calif.

I finally went on an outdoor adventure with First Descents and connected with other survivors of life-threatening health issues.

Early on in sharing my journey, I received an email from an organization called First Descents. The email said they offered “free outdoor adventure programs that empower them to climb, paddle, and surf beyond their diagnosis, reclaim their lives, and connect with others doing the same.” Initially, I was skeptical (since this seemed too good to be true — almost like a timeshare offer). However, I talked to the guy who emailed and I was hooked. I told him that I would definitely make it onto a program the following year.

Well… that was back in 2017. My physical recovery from cancer (and quite frankly, working on my mental health) prevented me from really committing to a trip. Eventually, I signed up to go rock climbing in New York in June… of 2020. For those of you reading this in the year 3029, June 2020 was a time in which travel was not advisable, so the program was canceled. I eventually was invited to go on an ice climbing trip in February of 2022 instead… just in time for Omicron (not one of the lesser known Transformers) to cancel that trip too.

However, I persevered and was accepted to the September 2022 First Descents surfing trip in Santa Cruz, California. Spoiler alert: this trip was thankfully NOT canceled and was so much more than I could have ever imagined.

Our daily schedule was packed with adventure, community building, and memories.

Upon arriving at the airport, we were whisked away to the Venture Retreat Center in Pescadero, California. This would become our home for the next 5 nights during our First Descents adventure. As more participants (who were also missing various body parts/organs, albeit with different diagnoses, stages, and treatment plans) trickled in, we got to know each other and instant bonds were formed. We shared our first meal together, which was packed with vegan friendly and gluten free options. As someone who consistently refers to this sub genre as “sadness food,” I was apprehensive, but our amazing chefs proved us wrong. Everything was delicious and they kept us well fed throughout the entire experience.

Each day, we woke up, ate breakfast, packed a lunch, and headed to the beach. We met our surfing instructors on the first day and they were exactly what you’re picturing as you read this. What you can’t picture is their immense patience and kindness as they instructed a group of newbie surfers. From physically holding our boards to get us into position to hooping and hollering as we caught waves, we were supported from the first wave to the last.

Surfing became a new challenge for me to overcome.

If it isn’t immediately clear to anyone who knows me, I like to set a goal, achieve it, and develop a new one. Surfing was no different. Though I have snowboarded a few times in my life and regularly hoverboard around my house, I had never been surfing. I became determined to get up on the board the first day… and I did. The second day, I wanted to ride some bigger waves… and I did. It gave me an objective to reach and push past to help me reach new heights (literally).

Yet surfing was humbling, too. On the third day, I got hit in the head by another surfer’s board. While it wasn’t a huge injury, it definitely rattled me a little. I wanted to keep going, but realized I needed to take a bit of a breather so I wouldn’t be burnt out for the final day.

On that aforementioned final day, a group of us paddled out five miles (or about 200 feet, depending who you believe) and I was exhausted. I didn’t want to take up the instructor’s offer to be “towed” out there, so I stubbornly paddled the whole way out. After successfully riding multiple waves, I had to admit that I just didn’t have anything left in the tank to paddle the 150 miles back to shore. I asked to be towed, and actually fell asleep while being pulled in.

Regardless of my energy, I always made sure that I ended the day with “just one more good wave,” which would usually turn into 5 more until I felt like I achieved it.

After surfing, there was still a lot more to do.

Afternoons were usually filled with hikes or walking tours of various locations around the area, which were great experiences. Seeing a redwood tree in real life is something that just cannot be conveyed in words or pictures (but I’ve included a picture here anyways). 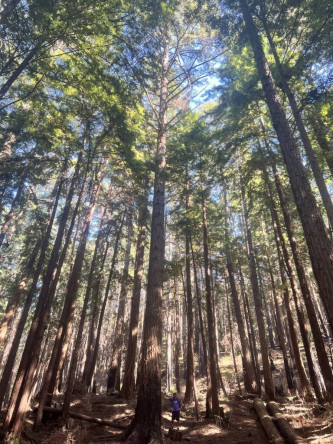 First Descents also has a number of traditions, one of which is choosing a nickname to go by. For that week, I was not Justin. I was Rex. There’s a story behind it, but I will not reveal it under penalty of torture. Each of us came up with our own names that were meaningful for us, and I truly felt like it allowed us to be our rawest selves.

The evenings were dedicated to what I termed “nonfires” (since there was an open flame ban). At these nonfires, we shared shout outs for others, discussed various topics, and had dessert (did I mention the food yet?) I’m not going to share more about these nonfires because they were special and you have to be there to understand it.

Connecting with others – so many people saying they felt alone

While the adventuring was cool, what really made the trip an unbelievable getaway was the connections we all made between us. I won’t call people out by name (or rather, nicknames) but each of you made an immense impact. (I said that I won’t call you out, but if you were on this trip and are reading this post, feel free to leave a comment here!)

Whether it was learning about Canadian bagged milk or kangaroo permits, the laughter didn’t stop. We also got deep, sharing with each other things that many said they never felt comfortable talking about before. It’s amazing when you think about it – we were all strangers to each other prior to the trip and in the span of a few hours, we were baring our souls to all.

One thing that struck me was a common thread of feeling like we were alone in our journeys. All of us were diagnosed in what was supposed to be the prime of our lives, and the majority of us were the only or first ones in our friend groups to get cancer. Not wanting to not feel alone and not wanting the next versions of Justin/Rex who come along to not feel alone have always been why I started in my advocacy. It was both refreshing to know I wasn’t alone in this feeling of alone, and also motivating to know that there is still work to be done. I’ve admittedly been taking a bit of a pause in this realm, and this trip is exactly what I needed to rekindle the nonfire.

Truthfully, I only have one regret about my First Descents trip.

This one is on me – I wish I hadn’t waited so long to go on it. I’m coming up on the six year mark of diagnosis, and I wish I had taken this opportunity closer to the one or two year mark. We had a bunch of people who had finished treatment earlier this year and even some who were on active treatment. At times, I felt like the village elder since I was so much more removed from treatment than others. I still had an amazing time and was like a proud father seeing some newer cancer patients and survivors conquering the obstacles they faced.

If you’re reading this and you’re debating if you should go on a First Descents trip, stop reading and go. I seriously cannot underscore that enough (well, maybe you should apply, get accepted, pack, and all that jazz, but after doing all those things, go). If you feel like you haven’t “earned it” or aren’t “ready for it,” I promise you that you are, even if you don’t realize it yet. Don’t make the same mistake I did by waiting so long. Beyond the adventure, the food, and the connections, there is so much more there is more that I want you to experience it for yourself; so much more than I ever expected.

Thank you so much to First Descents, our staff, and the other participants for making a trip that was truly unforgettable. I cannot wait to see the documentary they make about us!