What Causes Immunotherapy’s Heart-Related Side Effects?

T cells that attack a protein in heart cells may cause myocarditis following treatment with immune checkpoint inhibitors.

Immunotherapy drugs known as immune checkpoint inhibitors (ICIs) are used to treat a growing number of cancers. These drugs can work very well, shrinking tumors and keeping them at bay for long periods. But for some patients, they can also have serious side effects.

A rare, but often fatal, side effect of these drugs is myocarditis, a raging inflammation in the heart. Researchers have now identified what they believe is one of the chief causes of this serious problem: immune cells called T cells attacking a protein in heart cells called α-myosin.

The study was done largely in mice, using mouse models that experience myocarditis after treatment with ICIs in much the same way as humans.

Limited experiments using blood and tissue samples from several people who had died of ICI-induced myocarditis were consistent with the mouse findings, the researchers reported November 16 in Nature. 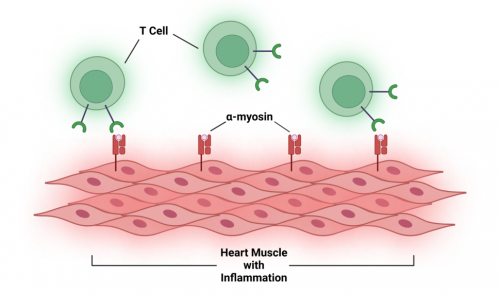 A new study has identified a possible chief cause of myocarditis following treatment with immune checkpoint inhibitors: T cells that recognize and bind to snippets of a protein on heart cells called α-myosin.National Cancer Institute/Nadia Jaber. Created with BioRender.com

“We’re starting to better understand the mechanisms of the [side effects] caused by immune checkpoint inhibitors. And now we have a better understanding of myocarditis” caused by ICIs, said study co-leader Justin Balko, PharmD, PhD, who develops new cancer treatments at the Vanderbilt University Medical Center.

The findings could help researchers find a way to identify people who may be at increased risk of this side effect or even ways to prevent it, Dr. Balko continued.

“But we need a lot more data from a lot more patients before we can do that,” he said.

Immune checkpoint inhibitors help the immune system detect and attack tumors, and in so doing they can recruit an army of T cells. But those T cells can sometimes go where they aren’t wanted, attacking healthy cells in different parts of the body, most commonly the colon and lungs.

These organs become inflamed, causing pain, difficulty breathing, and other symptoms. These side effects are typically treated with steroids, which can have their own side effects.

Dr. Balko and two other researchers on the study, Doug Johnson, MD, and Javid Moslehi, MD, started looking into ICI-induced myocarditis more than 6 years ago. Drs. Johnson and Moslehi, both clinical researchers at Vanderbilt at the time, had come to Dr. Balko to discuss an alarming problem: Two melanoma patients treated with a combination of ICIs developed severe myocarditis and died.

In collaboration with researchers at several other institutions, they published a short paper on these two deaths. Based on the response to their paper from other clinicians, they learned that these were not isolated incidents.

“It was definitely an issue and something that we felt we needed to solve,” Dr. Balko said.

Despite its rarity, ICI-induced myocarditis is a serious concern, explained Syed Saad Mahmood, MD, MPH, of Weill Cornell Medicine and a cardiologist who specializes in “cardio-oncology.”

This year “up to 1 million people [in the United States] with cancer may be candidates for an immune checkpoint inhibitor” at some point in their treatment course, Dr. Mahmood said. As many as half of the people who develop ICI-induced myocarditis will have a serious heart-related event, he continued, and many of those will die as a result.

“That’s a lot of patients who may be considered at risk were they to be treated, especially [because we’ve] had a limited understanding of who is predisposed to myocarditis,” he said.

Immune checkpoint inhibitors are also increasingly being used in people who have earlier-stage cancer, both before and after surgery, Dr. Sharon said. To date, using immunotherapy in this way has generally been shown to improve a patient’s cancer-related outcomes, Dr. Sharon said.

But it also means that “we’re giving checkpoint inhibitors to a healthier population of people,” he continued, and serious inflammatory side effects like myocarditis become a bigger concern.

Provoking an Immune Attack on the Heart

In 2021, many of the same researchers involved in this new study published a paper describing a mouse model of ICI-induced myocarditis they had developed. With this model in hand, Dr. Balko said, the team could start to more thoroughly investigate why this inflammation occurs and, possibly, how to prevent it.

Some of the team’s findings were expected, Dr. Balko said. An overabundance of T cells is a hallmark of inflammation, so it wasn’t surprising that they found so many T cells in and around the hearts of the mice with myocarditis.

But two other key findings were more of a surprise. One was that most of the T cells were CD8+ T cells, the kind of T cells that are primarily responsible for killing infected or diseased cells. The other was that a heavy presence of CD8+ T cells was a prerequisite for this type of myocarditis. Large populations of other types of T cells, they showed, did not cause serious inflammation in the heart.

They also speculated from the beginning that α-myosin may be involved in myocarditis, Dr. Balko noted. As a protein that’s critical to the heart’s contracting functions, it’s one of the most common proteins in the heart. And earlier studies had linked the protein with myocarditis.

Focusing on α-myosin proved to be fruitful. For example, not only did α-myosin induce the production of more T cells (known as expansion), but many of the T cells in and around the hearts of the mice with myocarditis only recognized—and grabbed on to—α-myosin.

Taken together, Dr. Balko and his colleagues believe their findings indicate that α-myosin may be an “autoantigen” in mice—that is, it unleashes an autoimmune response, redirecting immune cells to attack the heart.

The question then became: Is α-myosin doing the same thing in humans?

The researchers’ analysis of blood and tissue samples from three people who had ICI-induced myocarditis seemed to suggest that it may be. For example, as was seen in the mouse studies, many of the T cells in those samples recognized α-myosin specifically.

Prospects for Myocarditis Biomarkers and Treatment

Dr. Balko cautioned that more research is needed to confirm that, in humans, myocarditis is caused by an accumulation of CD8+ T cells that specifically recognize α-myosin. If so, he’s hopeful that their work can lead to ways to better address ICI-induced myocarditis.

Their findings “give us opportunities to develop biomarkers and diagnostics to identify patients at risk” of myocarditis, he said. “We’re working on that now.”

Dr. Mahmood said the findings might also point to potential options for treating ICI-induced myocarditis, he continued, such as potentially developing drugs that only block CD8+ T cells or that only recognize α-myosin.

In the meantime, at least one study has identified a way to potentially spot ICI-induced myocarditis before it becomes severe. And a large clinical trial is currently testing the drug abatacept (Orencia) as a treatment for ICI-induced myocarditis. Abatacept, which is approved to treat several autoimmune diseases, including rheumatoid and other forms of arthritis, works by blocking T cells.

When it comes to the side effects of immunotherapy drugs, it’s important to strike a balance, Dr. Sharon cautioned.

“These are potentially life-saving therapies,” he said. Although the potential for any side effects ICIs may cause has to be considered, “we don’t want people to avoid taking them because of the fear of rare side effects.”

The data on ICIs strongly favors their use for patients with potentially lethal cancers, he continued.

“What this study shows most of all is that we have a path forward for finding ways to prevent, mitigate, and treat severe side effects of ICIs like myocarditis.”

This story was published by National Cancer Institute on December 22, 2022. It is republished with permission.