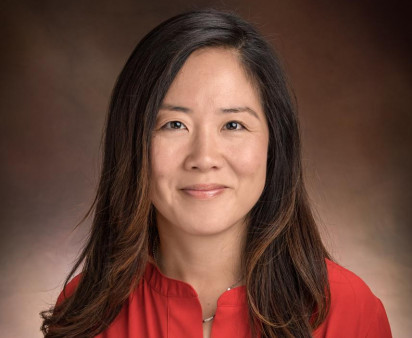 To look at former Damon Runyon-Dale Frey Breakthrough Scientist Angela J. Waanders, MD, MPH, one would never imagine she has faced failure. She is Director of Precision Medicine in Oncology at the Lurie Children’s Hospital of Chicago, an Associate Professor at Northwestern University’s The Feinberg School of Medicine and a pioneer in developing more effective treatments for children with brain tumors. “The fact that I failed to gain admittance to medical school the first time I applied is one of the experiences I credit for my success now. If I didn’t learn to overcome failure, I don’t think I’d have been as fearless in my career,” says Waanders. She recognized early on that she wanted to make a difference in the world through a career in science and medicine and has never looked back.

Her research focuses on pediatric brain tumors, the leading cause of disease-related death in children. Very little is known about why pediatric brain tumors develop and there is a desperate need for effective treatment options. Waanders is a leader in the efforts to find and understand the genetic basis of these deadly tumors. Her work directly led to the discovery of an abnormal cancer-causing oncogene that is now known to be a sign of pediatric low-grade gliomas (PLGGs). Based on this finding and several additional genomic mutations that have been identified, she has created an extensive research program and is collaborating with pharmaceutical companies to identify promising new treatments.

Waanders is also the executive board chair for the Children’s Brain Tumor Tissue Consortium (CBTTC), a multi-institutional effort to collect and share massive amounts of data about individual patient tumors. For a child with a brain tumor, this means that the brightest minds in the world have access to the data they need to do actual research and discover novel, targeted treatments and individualized therapies.

“I would encourage young girls to dream, to develop intellectual curiosity, and to be fearless,” she says. “I would also tell them not to be afraid to fail. In science, some of the biggest failures have led to the most significant discoveries.”