The conundrum of starting salvage radiation therapy early versus knowing where to radiate based on imaging came up as well. Istock (Model(s) used for illustrative purposes only)

I met with my doctor this afternoon to review my increasing PSA results, and it went just about as expected. There’s increasing concern, but things are progressing slowly enough that we can continue on the four-month test cycle for now. That means I’ll be doing this all over again in April.

There were a few reality check moments in the conversation, though. I’ll get to those in a moment.

One thing I need to learn to do is shut up—at least for the first part of the meeting with the doctor. I’m not very good at letting the doctor talk and offer up his thoughts and recommendations and then ask the questions that I have. I just launch into a barrage of questions based on the research that I’ve done and assault the poor guy. On a positive note, he really didn’t dispute anything that I told him nor did he tell me that I was completely out to lunch on certain issues.

We reviewed the success rate for SRT, with various studies showing it to be 35%-55% effective at being progression-free at 5 or 6 years. (Here’s one.) We also discussed the potential side effects of SRT, and he did seem to believe that the risks were lower than I thought they may be.

The conundrum of starting SRT early versus knowing where to radiate based on imaging came up as well. My sense was that he’d prefer to start SRT while the PSA is less that 0.2 ng/ml, and certainly before it reaches 0.5 ng/ml, assuming that the cancer remained in the prostate bed. Doing so, he said, offers the best chance for success. He suggested that, if we wait until it would be detectable on even the most sensitive imaging (which can’t detect anything reliably until the PSA hits the 1.5-2.0 range), that radiation would do little if any good at that point, as the cancer will likely have spread. Androgen deprivation therapy (ADT) would be the treatment option of choice at that point, and ADT is not curative. It only prolongs life (with substantial side effects impacting quality of life).

The reality check moment for me came with his comment about waiting too long to the point where SRT wouldn’t be effective, and that ADT would be my primary treatment option. That really was an, “Oh, shit,” moment for me. It’s very easy to sit here and speculate how I will act in hypotheticals, but at some point in the future, I am going to have to make real world decisions that affect my longevity and quality of life.

Based on my slow PSA doubling time (around 16 months), if my PSA progresses at its current rate, I’ll have 12 to 28 months to think about this and make my decision, based on whether I want to act if my PSA is around 0.15 or let it go all the way to 0.20. (See my “decision zone” in yellow below—yes, I had to geek out in my spreadsheet once again.) If I want to wait until it’s all the way to 0.5, I’ll have even more time. 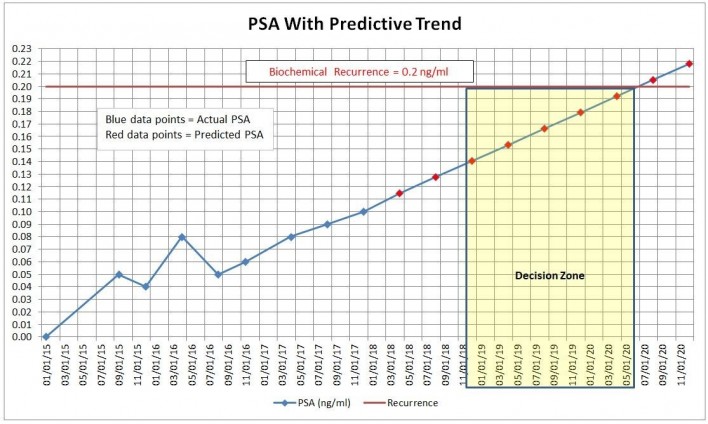 My “decision zone” is in yellow.Daniel E. Zeller

Of course, one option is to do nothing. A study in 1999 showed that it took, on average, 8 years after PSA levels began to rise to reach metastasis, and another 5 years after metastasis to death.

The bottom line is that this is becoming increasingly real and that there will be some tough decisions in the next year or two. Of course, those decisions are mine and mine alone, and will be based on a variety of factors, not least of which will be my risk tolerance and any treatment’s impact to quality of life.

This blog post originally appeared on Dan’s Journey through Prostate Cancer. It is reprinted with permission.