After salvage radiation therapy for prostate cancer, I got the results of a prostate-specific antigen test. (Actually, it’s not so bad.)

The title of this post may be a tad misleading. My PSA results were okay; my disappointment is with something else.

I’m not quite sure how to feel about that. It’s back to where it was when it first came detectable seven years ago, but I was kind of hoping the hormone therapy would have knocked it all the way down to undetectable. It’s going to take considerable time for the salvage radiation therapy to do its thing to the PSA. 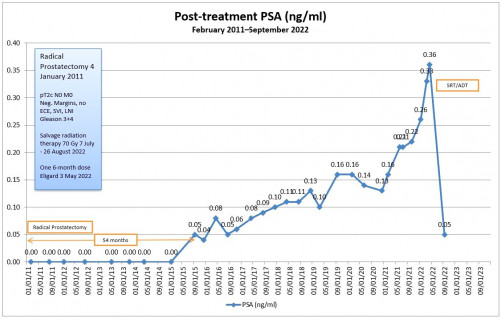 The urologist scheduled this PSA test back in May when I received my Eligard injection. The radiation oncologist wanted me to have a PSA test just before our follow-up appointment in late November/early December (that appointment date won’t be determined until late October).

For the first time in my ten years of dealing with VA San Diego, I’ve been disappointed with how things are being handled.

Late in the evening on Saturday, 3 September (our three-day Labor Day holiday weekend with no work on Monday), I emailed my primary care physician about the back pain I was experiencing. His assistant acknowledged my email on Wednesday, 7 September, saying he would pass my email to the doctor for action.

I never heard from the doctor last week or Monday of this week, but Tuesday, 13 September, I received an email informing me that a prescription had shipped. That caught me off-guard because I wasn’t expecting anything.

In a nutshell, the doctor had simply gone ahead and prescribed a muscle relaxer and an MRI based on my email alone, without any discussion with me at all. That annoyed me because he wasn’t looking at the larger picture.

The muscle relaxer has common side effects of:

The side effects in bold are those that are most concerning to me, because those are exactly the side effects from the radiation and Eligard that I’m trying to reduce, not add to them.

Had my doctor and I had a conversation before he issued the prescription, we could have addressed those concerns.

His nurse called me on Tuesday morning and said someone would call me to set up a video conference call with the doctor, and as of today (Thursday), I’m still waiting for the call.

Perhaps the real reason that I’m so frustrated is that I feel as though I’m getting to the point in this disease where the treatments are beginning to impact my quality of life more than the disease itself did prior to the treatments. That sucks, and it’s difficult to reconcile.

Yes, I know it’s very early after the radiation therapy and things will likely improve with more time, and I also know that I’m getting way ahead of myself but, even so, I can’t help but feeling that I am at least one step closer to “the treatment is worse than the disease” phase, and that’s something I’ve wanted to avoid for a long, long time. With luck, these current side effects are temporary, and I’ll have many steps to go before that really kicks in.

This post originally appeared September 15, 2022, on Dan’s Journey Through Prostate Cancer. It is republished with permission.