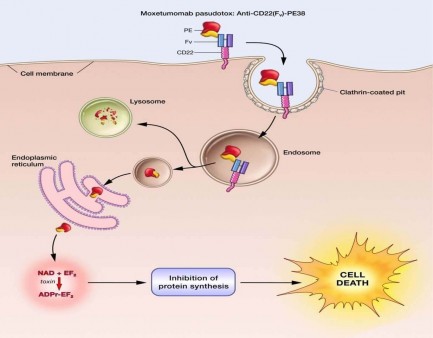 Moxetumomab pasudotox (Moxe) binds CD22 receptors on the surface of cancerous B cells, where it is internalized and processed to release its toxic payload. National Cancer Institute

Previous clinical studies have suggested that an experimental cancer drug that includes a bacterial toxin may hold promise for treating the most common cancer in children, B-cell acute lymphoblastic leukemia (ALL). But the benefits of the therapy, which was developed at NCI, were limited because patients quickly developed resistance to the drug.

Now a new study has identified a possible strategy for improving the efficacy of this drug, moxetumomab pasudotox, or Moxe, in patients with relapsed and chemotherapy-resistant (refractory) ALL.

In the new study, NCI researchers and their colleagues showed that, in mouse models of this cancer, combining the drug 5-azacytadine (azacitidine or AZA)—which is already used to treat some types of blood cancer—with Moxe helped overcome resistance to the toxin-based therapy.

The findings suggest that AZA might improve the responses to Moxe in children with ALL, said the study’s lead investigator Ira Pastan, M.D., of NCI’s Center for Cancer Research.

The new findings were published February 20 in Proceedings of the National Academy of Sciences.

The study provides evidence to support a clinical trial of this drug combination in patients with leukemia, said Andrew Lane, M.D., Ph.D., of Dana-Farber Cancer Institute, a leukemia researcher who was not involved in the study.

Relapsed and chemotherapy-resistant childhood ALL is relatively uncommon, but when the cancer does come back it is difficult to treat. In addition, the current initial, or first-line, treatments for childhood ALL have serious side effects. So, researchers have been working to develop treatments that are more targeted and less toxic. One potential target is CD22, a molecule that is often found on the surface of tumor cells in ALL and that Moxe binds to.

“Targeting cell surface molecules that are found at unusually high levels in acute leukemias is considered an important addition to standard chemotherapy,” said ALL researcher Marina Konopleva, M.D., Ph.D., of the University of Texas MD Anderson Cancer Center, who was not involved in the new study. And Moxe is just one of many such treatments being developed, Dr. Konopleva noted.

Moxe is an immunotoxin that consists of two fused components: a piece of an antibody that targets CD22, and a piece of a toxin from Pseudomonas bacteria. Moxe kills cancer cells by binding to CD22, entering the cell, and releasing the toxin, which blocks the cell’s ability to make proteins.

In a previous early-stage clinical trial of Moxe in younger patients with ALL that had relapsed after initial treatment or was resistant to chemotherapy, only about one-third of patients had a reduction in the extent of their disease. And among those who initially responded to Moxe, their cancer soon became resistant to the treatment and their cancer returned, Dr. Pastan said.

Moxe is one of several microbial toxin fusion drugs under development that have shown promise, Dr. Lane said, “so it is critical to understand more about why they work or don’t work in certain cancer cells.”

Studying How Resistance Develops and How to Overcome It

Previous studies by Dr. Pastan’s team identified the mechanism of Moxe resistance in lab-grown human ALL cell lines and showed that AZA can prevent or partially reverse that resistance.

For their new study, the researchers developed a mouse model for studying Moxe resistance in ALL, which they speculated would more closely resemble resistance in patients. They showed that immune-deficient mice injected with human ALL cell lines developed leukemia in the blood and bone marrow. The mice initially responded to Moxe but they quickly became resistant, Dr. Pastan said.

The Moxe-resistant cells, the researchers found, survived in distinct locations in the animals’ bone marrow and then spread to other parts of the body. The resistant cells had reduced levels of CD22, Moxe’s cell-surface target. They could no longer grow in the lab and contained major gene expression and chromosome changes.

The finding that CD22 levels are lower in Moxe-resistant cells “is interesting because in other leukemias where there are targeted therapies [that have] targets like CD22, what we’ve seen in patients is that…frequently at the time of relapse the patients’ tumor cells lose the target,” Dr. Lane said.

Dr. Pastan’s team showed that mice pretreated with AZA had greatly improved responses to Moxe. In one mouse model, AZA prevented resistance to Moxe from developing and the regimen completely eradicated the leukemia.

Identifying a drug “that prevents resistance so efficiently” in an animal model is “pretty amazing,” Dr. Pastan said.

In the second mouse model, created with a different human ALL cell line, AZA delayed Moxe resistance and prolonged survival.

But how AZA might work to overcome resistance in the mice remains unclear, Dr. Konopleva said.

Clinical Trials Needed to Follow Up on Mouse Studies

“AZA is commonly combined with other novel agents in clinical trials in leukemia because it’s well tolerated,” said Dr. Lane. He is leading an early-stage clinical trial of AZA and another toxin fusion drug, DT(388)IL3 fusion protein SL-401, in patients with relapsed or refractory acute myeloid leukemia (AML).

That trial resulted from findings Dr. Lane and his colleagues reported at a conference late last year, which showed that, AZA reversed resistance to SL-401 in several different AML cell lines.

Dr. Konopleva said that, ideally, animal studies of cancer drug resistance should be done using patient-derived xenografts—tumor tissues from patients that are implanted into mice—rather than with lab-grown cancer cell lines. Dr. Lane agreed, although he said such studies can be difficult to do depending on the cancer type.

“We have leukemia patients who are in desperate need of new therapies,“ he continued. ”When you have two drugs that have been shown to be safe in people, and then they show some additive effects in a [lab] dish and in a mouse model, you might want to move to clinical trials before knowing whether the lab model is perfect.”

MedImmune, a subsidiary of AstraZeneca, licensed Moxe from NCI and has worked with NCI’s Cancer Therapy Evaluation Program to further clinical development of the drug. The company has not said whether it will pursue clinical trials of the combination of Moxe and AZA.

Dr. Pastan said that Moxe alone or combined with other therapies could eventually be considered as a first-line treatment for hairy cell leukemia and possibly other cancers that have high CD22 levels. But the drug first must be shown to be safe and effective in patients whose cancer does not respond to standard therapies, he said.

This article was originally published on March 12, 2018, by the National Cancer Institute. It is republished with permission.