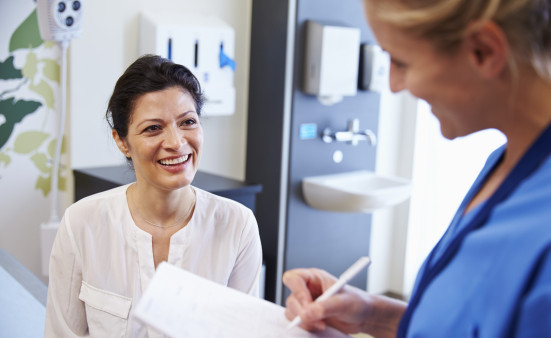 People who participate in a research study that includes a genetic test usually don’t get those test results back. In part, that is because of concerns that doing so might create burdens for study participants that outweigh any potential benefits.

But a new study shows that many study participants reported feeling more knowledgeable and less anxious about genetic testing after receiving their results when they had talked about them with a genetic counselor.

These findings suggest that study participants who are interested in receiving their results have positive experiences, said lead investigator Angela Bradbury, MD, an oncologist with the University of Pennsylvania Health System. “We aren’t seeing all of the hypothetical harms and concerns in this study,” she added.

However, about half of the study participants did not respond to the offer to receive their genetic research results, which required a consultation with a genetic counselor.

“We probably need to explore some alternative models for delivering genetic counseling” to try to increase the response rate, said Adam Buchanan, MS, MPH, LGC, of Geisinger Genomic Medicine Institute in Danville, PA, who was not involved in the study.

Published April 16 in JCO Precision Oncology, the NCI-funded study begins to answer some of the major questions about returning genetic research results to participants of cancer studies, said Charlisse Caga-anan, JD, a program director in NCI’s Division of Cancer Control and Population Sciences.

Although studies have shown that, in general, people hypothetically are interested in receiving genetic research results, there have been relatively few studies that have investigated how to return results and what their impact is, Caga-anan explained.

“That’s the gap we were trying to fill,” said Bradbury.

She and her colleagues contacted 402 women with a history of breast cancer but no harmful mutations in the BRCA1 or BRCA2 genes who had participated in a separate research study. That study involved a genetic test for mutations in multiple genes that may influence the risk of developing breast and other cancers. Having a mutation in one or more of these genes (a positive result) could change how a patient’s cancer treatment is managed or how often they get screened for other cancers. A positive result could also impact medical care for the person’s family members.

For the new study, Bradbury and her colleagues offered the women the opportunity to learn their individual test results after meeting with a genetic counselor. The researchers explained that the invitation to participate in the new study was not an indication of a positive test result.

Nearly half of the women did not respond to the researchers’ letters; these women were more likely to be older and nonwhite. Some women declined to participate outright, while others discussed participation with the researchers via phone but did not enroll. Overall, 107 women—more likely to be younger, married, and white—indicated that they were interested in receiving their genetic research results and enrolled in the study.

In some ways, it was a surprise that so many women did not respond, said Bradbury. There is a presumption that everyone who participates in a genetic research study wants to receive their personal genetic results, she explained, but these findings raise questions about that assumption.

The researchers want to understand why some women declined or did not respond. “Whether they understood what was being offered and whether they want to engage with genetic information remains unknown,” Bradbury said.

After these discussions, participants reported feeling less anxiety and uncertainty about receiving their results. The women then decided if they wanted to move forward with receiving their research results. Nearly 90 percent of the participants made an “informed decision”—a decision that was in line with their personal knowledge and perceptions about genetic testing.

Genetic counselors then conveyed the genetic research results to the women who wanted them, either by phone or in person. Only 13 of the 83 women who wanted their results had harmful mutations that are associated with an elevated cancer risk. Another 16 women had mutations, or variants, of uncertain significance (VUS), meaning it is unclear if the mutation is associated with an elevated cancer risk.

The genetic counselors advised women who had known harmful mutations or certain VUS to confirm their research results via clinical genetic testing. For the 64 percent of women who proceeded with confirmatory clinical testing, genetic counselors assisted them with the testing. Though research funds were available to cover costs of the confirmatory clinical testing, the participants’ health insurance covered the costs in full for all but one of the women.

Confirmatory clinical testing verified nearly all of the mutations found by the research test. In some cases, the research investigators and the clinical lab staff had different interpretations of the results.

“They don’t have the anxiety and depression that researchers, clinicians, and ethicists were concerned about—at least when they underwent genetic counseling,” said Caga-anan. These results are consistent with other studies of returning genetic research results, said Buchanan.

But the perceived utility—how useful participants thought the information was—was lower after they received their results.

“Maybe people initially think that genetic results tell you more than they actually do,” Caga-anan said. “That is one of the concerns with giving genetic information to people; they might overinterpret it.”

Overall, the psychological effects were largely the same for all participants regardless of the genetic research result (no mutations, harmful, or VUS) they received. However, women who learned they have a VUS reported feeling an increase in cancer-specific distress.

“There’s been a lot of concern about variants of unknown significance and the confusion and stress they may cause for patients,” Bradbury noted. But because the participants also reported feeling less anxiety and depression, she said, “the data are mostly reassuring.”

For a few women, the clinical test results changed their medical care. For example, one woman found out that she has Lynch syndrome, a genetic disorder that increases the risk of developing colorectal and other cancers. Consequently, her doctor recommended that she should up the frequency of colorectal cancer screening. For some of the women, their test results implied that their relatives might also carry mutations that increase their risk for developing cancer.

One limitation of the study is that it only focused on the experiences of women who were interested in receiving their results. These women may feel less stress and anxiety about cancer to begin with, Bradbury pointed out. She also noted that a relatively small number of women in this study had harmful or VUS mutations.

And because of their cancer history, the women in this study know that they have increased breast cancer risk. “In that setting, the usefulness [of genetic testing] is better settled than in the setting of population screening,” Buchanan explained. Whether it is helpful to provide genetic research results to people without cancer is still unknown, he added.

Bradbury also acknowledged that offering thorough discussions with genetic counselors may have affected their findings. “There may be a greater risk of psychological harms if a different approach is taken,” she said.

“It is very resource-intensive to offer genetic counseling to everyone and [offer to] pay for clinical confirmatory testing when insurance doesn’t cover it,” Caga-anan noted. Not all research groups have the resources to do the same, she added.

To limit the resources needed to responsibly return results, Bradbury and her colleagues are exploring the use of a web-based tool to help research study participants decide if they want to receive their genetic research results. The investigators are testing the online tool, which is available in English and Spanish, in ongoing studies.

In addition, “there are a variety of models to help patients who are interested in genetic testing get access to it,” Buchanan said. These models, which are still being investigated, potentially could be useful for returning genetic research results.

How researchers can return genetic research results to study participants in a responsible way is a major unanswered question, Caga-anan explained. The approach taken by Bradbury and her colleagues relied heavily on genetic counselors and is an approach that is typically adopted when genetic test results are returned in the clinical setting, said Buchanan.

This post was originally published on June 1, 2018, by the National Cancer Institute. It is republished with permission.