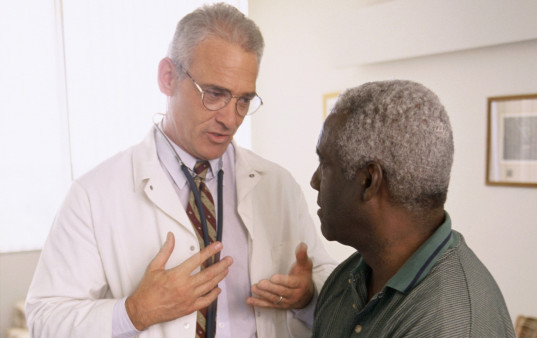 New findings from a clinical study funded in part by NCI show that use of a multipronged approach designed to address some of the underlying causes of these disparities may help to reduce them. The approach not only eliminated treatment gaps between black and white patients with early-stage lung cancer, but also improved treatment rates for all patients.

The three-pronged approach included: a real-time warning system tied to electronic health records, to keep patients from falling through the cracks; feedback to clinical teams on treatment completion rates for black and white patients; and trained nurse navigators to engage with patients to identify and resolve barriers to care.

The results, published February 4 in Cancer Medicine, “are really promising,” said Christopher Lathan, MD, MPH, an oncologist at Dana-Farber Cancer Institute who studies racial disparities in lung cancer treatment but was not involved with the study.

“This is a great example of a multilevel approach that tries to address many different factors that contribute to racial disparities,” Lathan said. “It’s the type of intervention that we need to see tested and published, and hopefully expanded and confirmed going forward.”

In 2006, for example, Lathan and his colleagues reported that black patients with early-stage lung cancer are less likely than white patients to have surgery recommended and more likely to refuse surgery, despite having similar access to care. And a 2010 study led by Cykert found that black patients with early-stage lung cancer who had two or more co-occurring health problems—such as a heart condition or diabetes—almost never had surgery for the cancer, despite the fact that these conditions are not good medical reasons for a person not to have surgery, he said.

“Doctors were less willing to take the same treatment risks with patients who were [racially] different from them,” Cykert said. This may be due to implicit bias—attitudes or stereotypes that affect people’s understanding, actions, and decisions in an unconscious manner.

The 2010 study also found that black patients who did not have a regular source of medical care tended to trust physicians less or have communication problems with physicians, leading them to drop out of care completely. Denial of their cancer diagnosis also played a role for some patients.

Cykert and his colleagues designed their approach, or intervention, to address multiple underlying causes of treatment disparities. They did so with input from the Greensboro Health Disparities Collaborative, an academic–community partnership formed in 2003 to better understand and reduce racial and ethnic health disparities.

Nurse patient navigators involved in the study, as well as staff at the five participating cancer centers—two of which were community centers—took part in health equity education and training sessions.

The real-time warning system pulled data from electronic health records daily and delivered alerts to nurse navigators when a patient missed a scheduled appointment or did not reach an expected care milestone, such as having potentially curative treatment with surgery or radiation scheduled within 90 days of their initial visit.

If a patient missed an appointment, a nurse navigator who had established an initial relationship with the patient would then contact the patient to identify and help resolve barriers to care, Cykert said. If a treatment milestone was missed, the navigator alerted a “physician champion”—a doctor who engaged the clinical team and discussed possible remedies.

The clinical team also received race-specific feedback on treatment completion rates “so that they could be more aware of racial disparity and address it in ongoing care for patients,” said Matthew Manning, MD, of Cone Health Cancer Center in Greensboro, NC, one of the physician champions and study coauthor.

“Many physicians are not aware of implicit bias in their own practice, or that implicit bias from caregivers across the continuum of care contributes to racial disparity,” Manning continued.

“There is also a lack of awareness of barriers to access to care that fall more heavily on underserved populations,” he said, such as the lack of access to reliable transportation.

The team compared the rates for receiving surgery or radiation for patients in the study with the rates of those treatments in what the researchers called a baseline control group: all patients diagnosed with early-stage NSCLC from the five participating centers during the 6-year period before the study started.

In other words, Manning said, “This study, by trying to close the gap between black and white patients, ended up improving treatment for everyone.”

To make sure that any improvement seen in the study participants was due to the intervention rather than something else, such as a trend in treatment that had developed over time, the team also looked at treatment completion rates in a second control group, Cykert explained. This group consisted of people with newly diagnosed early-stage lung cancer from two of the five participating centers who were seen at the same time as the patients in the study group but were not enrolled in the study.

Treatment rates for both black and white patients in the study were better than those of patients in this second control group, the researchers found.

A Potential Blueprint for Reducing Disparities

If the multilevel approach used in this study can be replicated and shown to be effective elsewhere, “then you have a blueprint that you can use to alleviate disparities in other areas of cancer care,” Lathan said.

Implementing the approach more widely would not be too difficult or costly because of the widespread use of electronic health records and the growing use of patient navigators in cancer treatment centers, Cykert believes. He acknowledged, however, that some special training would be needed.

“What’s great about this approach is that it’s using a multilevel intervention to try to address many different factors that could be contributing to racial disparities in care,” Lathan said. “The key to implementing it more widely is to figure out which of the three components of the intervention is the most effective, or if it’s a combination of the three,” he said.

“This intervention helped everybody and that shouldn’t be minimized,” Lathan added.

The involvement of community cancer centers in the study was important because most cancer care is delivered in community health programs rather than at universities and other academic cancer centers, Manning said.

“To get equal health outcomes—that is, health equity—we need to address cultural differences, access to care, and other issues that are different among different races and populations,” Manning concluded. “Making clinicians more aware of institutional racial disparity allows us to begin to address some of those barriers to care and move beyond health equality, which provides the same care to all patients, toward health equity.”