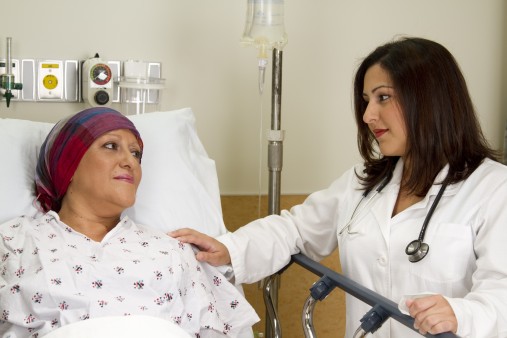 Though survival from endometrial cancer is high, it’s important to talk to your health care provider about risk factors. Istock (Model(s) used for illustrative purposes only)

It is the most common cancer of the female reproductive system in the US.

Diagnoses of endometrial cancer have increased worldwide in recent years, with rates rising in more than half of 43 countries studied during the decade that ended around 2010, a team of international researchers has shown.

The study, published October 16 in the Journal of the National Cancer Institute, also showed that rates of the disease vary widely among countries. Rates are highest in North America and Europe and lowest in middle-income countries, such as India and South Africa.

Although the study could not pinpoint the drivers of the increased incidence rates, “we can hypothesize that it has to do with [worldwide] increases in risk factors,” explained Leah Mechanic, PhD, MPH, of NCI’s Division of Cancer Control and Population Sciences, who was not involved with the study.

These risk factors include high and rising rates of obesity and shifts in reproductive trends, such as having fewer children and delaying childbirth until later in life, she added.

“Endometrial cancer is the fourth most common cancer in women in the United States and the incidence has been increasing,” said Dr. Mechanic, who helps to coordinate an NCI-sponsored consortium on the epidemiology of endometrial cancer.

In the United States, endometrial cancer, which begins in the lining of the uterus, is also the most common cancer of the female reproductive system.

Endometrial cancer is very treatable, with surgery—a hysterectomy—as the primary treatment. More than 80 percent of women with endometrial cancer live for at least 5 years after their diagnosis.

However, Dr. Mechanic said, hysterectomy also can have serious side effects, including blood clots and infection. In addition, women with advanced endometrial cancer or aggressive subtypes have much poorer odds of long-term survival, she added.

To examine trends in the burden of the disease worldwide, researchers from the American Cancer Society and International Agency for Research on Cancer (IARC) analyzed data on endometrial cancer incidence collected in an IARC database from 1978 to 2013 for countries that had at least 15 years of data.

Incidence rates varied widely during the time periods studied, including a 10-fold difference across countries for the 2006–2007 period. Overall, the highest incidence rates were seen in Slovakia and in white women in the United States.

The average annual percent change in incidence also varied between countries, from an average decrease of 1.8 percent over the last 10 years measured for Costa Rica to an average increase of 11.3 percent per year over the last 10 years measured for South Africa. (South Africa still had the lowest incidence rate at the end of the study period out of all countries measured, because the endometrial cancer incidence rate there was so low to begin with.)

Endometrial cancer is known to be more common in postmenopausal women, and the researchers found that in all countries, incidence rates were 4 to 20 times higher in women age 50 and older than in women under 50.

Incidence rates for black women in the United States, which historically have been lower than white women, grew to almost match those of white women by the end of the study period.

Though the current study could not show what drove this trend, previous research has suggested that the major risk factors for endometrial cancer affect white and black women similarly, and these risk factors have been increasing in both groups, Dr. Mechanic said.

Some studies have suggested that lack of medical coverage and unequal access to cancer treatments may, in part, play a role in these disparities.

Social Changes and a Need for Increased Awareness

With more than 80 percent of endometrial cancers are estrogen related, changing lifestyle and socioeconomic factors that affect estrogen exposure may largely explain the recent increases, the study authors wrote.

These changes, they explained, include increasing rates of obesity, which can increase levels of estrogen and has been estimated to account for nearly half of all endometrial cancer cases in North America.

Other hormonal risk factors include beginning menstruation at an early age, late menopause, not having children, and use of some types of menopausal hormone therapy, specifically estrogen-only therapy for women who still have a uterus. Conversely, use of oral contraceptives, a hormonal form of birth control, appears to protect against endometrial cancer.

Diabetes, another risk factor for endometrial cancer, has also been on the rise worldwide in recent decades, the study authors explained.

While no effective screening test currently exists for endometrial cancer, “people can pay attention to symptoms and speak with their doctor, particularly if they have other risk factors associated with endometrial cancer,” said Dr. Mechanic.

Such symptoms can include pain in the pelvic region and unusual vaginal discharge, including abnormal bleeding.

Dr. Mechanic also recommended that individuals with a family history of endometrial and/or colon cancer discuss it with their health care provider to determine their risks and appropriate care.

While survival from endometrial cancer is high, she said, “it’s striking that its incidence is increasing, and it should be on people’s radar.”

This article was originally published by the National Cancer Institute on November 20, 2017. It is republished with permission.