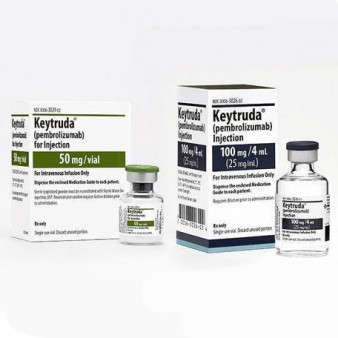 Median overall survival was 15.9 for the combination versus 11.3 months for chemotherapy alone.

On October 30, 2018, the Food and Drug Administration approved pembrolizumab (KEYTRUDA, Merck & Co. Inc.) in combination with carboplatin and either paclitaxel or nab-paclitaxel as first-line treatment of metastatic squamous non-small cell lung cancer (NSCLC).

Approval was based on KEYNOTE-407 (NCT02775435), a randomized, multi-center, double-blind, placebo-controlled trial in 559 patients with metastatic squamous NSCLC, regardless of PD-L1 tumor expression status, who had not previously received systemic therapy for metastatic disease. Patients were randomized (1:1) to pembrolizumab 200 mg or placebo in combination with carboplatin, and investigator’s choice of either paclitaxel every 3 weeks or nab-paclitaxel weekly on a 3-week cycle for 4 cycles followed by pembrolizumab or placebo. Patients continued pembrolizumab or placebo until disease progression, unacceptable toxicity, or a maximum of 24 months.

The recommended pembrolizumab dose for metastatic squamous NSCLC is 200 mg intravenously every 3 weeks, prior to chemotherapy when given on the same day, until disease progression, unacceptable toxicity, or 24 months after initiation.

This announcement was originally published on the Food and Drug Administration website on DATE, 2018