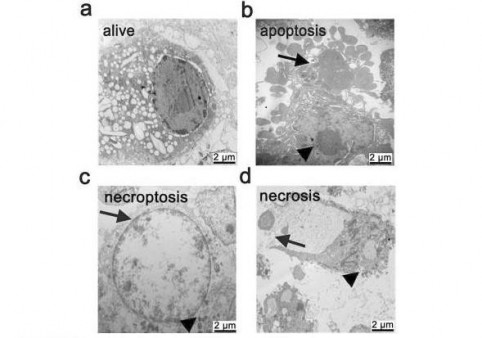 Could a Form of Cell Death Enhance Cancer Immunotherapy?

New research suggests that inducing necroptosis in or around tumor cells can help the immune system rid the body of cancer cells.

New research suggests that inducing a form of controlled cell death called necroptosis in or around tumor cells can help the immune system rid the body of cancer cells.

Necroptosis is an explosive form of cell death during which a cell typically swells and then bursts. In the study, researchers found that injecting cells undergoing necroptosis into tumors in mice kickstarted an immune response against the tumors.

In the NCI-funded study, published June 21 in Science Immunology, the researchers also used a virus to deliver genes for the proteins that drive necroptosis into tumor cells. Combining this treatment with a commonly used form of immunotherapy proved to be highly effective at eliminating tumors in mice, they reported.

Andrew Oberst, PhD, an immunologist at the University of Washington, who led the project, sees these as pilot experiments. “The findings are promising in thinking about how necroptosis could be deployed in the clinic someday, after significant additional development.”

“The kind of immune response that happens with viral infections is also the response cancer immunotherapy tries to trigger, so we hoped that necroptosis would stimulate some of those same pathways to help clear the body of cancer cells,” he added.

“Any cancer treatment is aimed at killing cancer cells, but how cells die is important,” explained Konstantin Salnikow, PhD, a program director in NCI’s Division of Cancer Biology. In order to eliminate cancer cells from the body more effectively, “we need to move toward cancer treatments that provoke an immune response,” Salnikow said.

To start, Oberst’s team had to see if inducing necroptosis would help the immune system fight cancer cells. They knew from past studies that to start necroptosis they had to activate the protein kinase RIPK3, which works with other proteins in the cell to start the process of self execution.

Annelise Snyder, PhD, then a graduate student in Oberst’s lab, activated RIPK3 protein in tumor cells to make them necroptotic. She then injected the engineered necroptotic cells into either melanoma or adenocarcinoma tumors implanted under the skin of mice. The necroptotic cells slowed down tumor growth and helped the mice live longer than when Snyder injected apoptotic cells into the tumors. Apoptosis is a tidier form of controlled cell death than necroptosis that does not release inflammatory signals into surrounding tissue.

Next, Snyder activated RIPK3 protein in normal rather than cancerous cells and found the same result: Injecting the necroptotic cells into tumors slowed their growth and helped the mice live longer.

The finding, Oberst said, showed that the dying cells were activating an immune response in the tumor that did not depend on the immune system recognizing specific markers on cancer cells.

“We initially thought that the response would depend on tumor cells needing to die, but the necroptotic cells are changing the tumor microenvironment to recruit immune cells in the area,” Oberst said.

Rather than injecting necroptotic cells into mouse tumors, the researchers found they could instead deliver an activated form of the RIPK3 gene into tumor cells using an engineered virus. The virus infected tumor cells and the activated RIPK3 triggered necroptosis, slowing tumor growth and improving how long the mice lived.

Oberst says he can see delivering RIPK3 into tumors as a therapeutic approach for humans in the future. Regardless of the delivery method—using a virus, RNA injection, or nanoparticles—generating an active form of the enzyme in tumors is likely to help suppress their growth, Oberst said.

Finally, the study showed that treating mice with an immune checkpoint inhibitor and inducing necroptosis in the tumor at the same time had a synergistic effect. That is, the combination killed cancer cells far more effectively than either treatment approach alone, fully eliminating tumors in most of the mice and preventing the same type of cancer cells from establishing a new tumor.

Douglas Green, PhD, an immunologist at St. Jude Children’s Research Hospital, who was not involved in the study, said that this approach of combining necroptosis with immunotherapy has promise. “This work is at the cutting edge of research on cell death and tumor immunotherapy.”

He added, “I hope that we will see a direct extension of this work into practical, effective cancer treatment. The strategy the authors outlined is readily adaptable for human use.”

Salnikow cautioned that it is difficult to predict how successfully and how soon this approach could be implemented. But, he said, this work provides an important advance in knowledge about anti-tumor immunity.

To help develop their findings for possible clinical application, Oberst and his team have begun working with industry partners. They are starting to extend their findings to different mouse models that better mimic human cancer.