Free Book, Panting, Patience, and Glowing in the Dark

I’ll try to be brief, but there’s a lot to tell you.

Four weeks after the decision to do tissue and blood biopsies was made, today my tissue sample made it to the Tempus lab for diagnostics. Bureaucracy and dropping the ball are the only explanations. Without my terrier self-advocacy, the sample would still be at the hospital. Teeth may have been bared once or twice, but I kept the growl low. 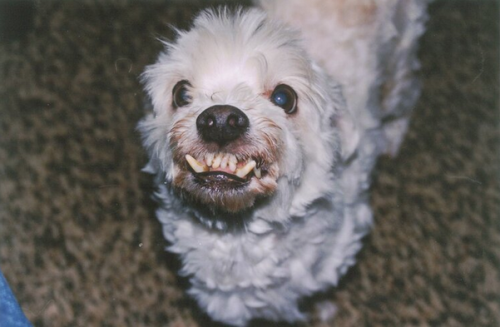 The question is always how far I can push before it becomes counterproductive. I think I toed right up to the line. In ten to fourteen days we’ll get the results, I’ll learn what mutations I have, and we can make a treatment plan. In short, the waiting coupled with frustration has not been easy, but at least there’s light at the end of the tunnel.

Yesterday I finished my tenth and final radiation treatment to my spine. This stuff fascinates me. The piece above my head shoots radiation through a template targeted to my spine. The template was aligned by lasers to my tattoos. I got zapped for about thirty seconds, and then there were three more short bursts. Each burst was a more narrowly focused beam designed to get through thicker parts so there are no “cold spots” in the radiation pattern. See how the machine is mounted on the wall? After the first part is done, the entire machine rotated under me, and then I was zapped from underneath just the same. Didn’t feel a thing. After the last session, I was invited to celebrate by ringing the gong. 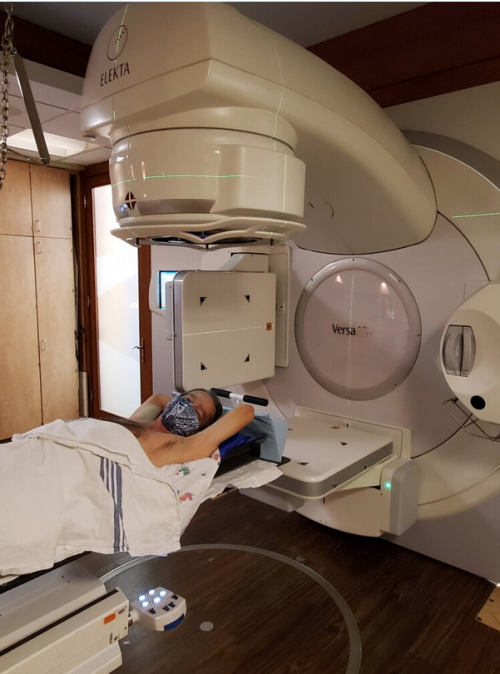 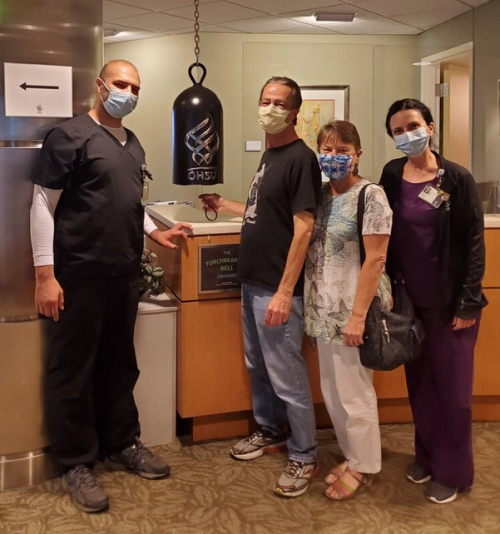 I didn’t expect the gong to mean much to me, but I got choked up. It’s a rite of passage. We just made it through one more step in this incredible journey, and I’m still standing. In fact, at this point I’m positively glowing.

The radiation keeps killing cancer cells for a couple weeks after finishing treatment, so I’m hoping for more complete pain relief by then. If not, I’ll have to wait three months to try again.

There’s also the heavy breathing – and don’t go there– I’m only talking about shortness of breath. It takes a couple of minutes to stop breathing hard after taking ten steps from the bathroom to my bed at night, so something has to change. It began around when radiation started, but the radiologist doesn’t think radiation is the cause because they avoided 95% of my lungs and no other symptoms line up. Unless the insurance company has their way, I’ll have a CT tomorrow to see if a blood clot in my lungs (embolism) is the cause. We don’t have a Plan B yet.

Let’s move on to the happy stuff! In recognition of World Lung Cancer Day this Sunday, August 1st, I will be giving away FREE digital copies of my book. I can remind you that lung cancer kills more people than the next three leading cancers (breast, ovarian, and prostate) combined, that 60-65% of all new lung cancer diagnoses are among people who have never smoked or are former smokers, and that lung cancer receives just one-fifth of the research funding of breast cancer, but there’s a better story to tell. Chris Draft, the most extraordinary lung cancer advocate the world has ever seen, met with our local survivor group in Portland last month for the #WhiteRibbonProject. He was passionate in saying that the best thing we can do is let people realize that people with lung cancer are just like them. So that’s what I want to do, and I’m asking for your help. Send me a picture of YOU, my cancer survivor friend, living your life of joy. Include friends, family, and pets if you like. I’ll post every one of them, so people can see the faces of lung cancer look just like they do. Just include your first name, cancer stage, and year diagnosed. Send your pics to dannthrives@gmail.com.

Back to the free book. Follow this link on August 1st and the book is yours: Second Wind: Thriving With Cancer  I hope the book speaks to you, regardless of cancer.

This post originally appeared on Dann’s Cancer Chronicles on July 29, 2021. It is republished with permission.