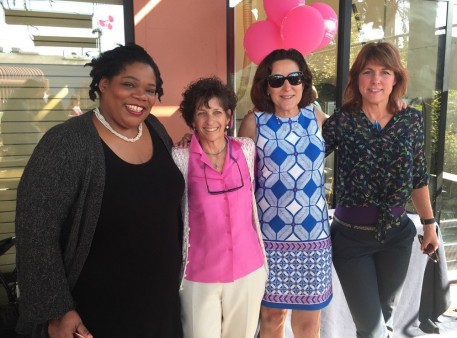 In recognition of Breast Cancer Awareness Month, HairToStay hosted a fundraiser at Charles Chocolates on Sunday, October 15. Though the event was dubbed “Chillin’ with Charles,” the rare warm San Francisco sun put the gourmet chocolates at risk of melting.

Last year only around 30 medical centers in the United States offered automated scalp cooling and it was FDA-approved only for breast cancer, Hornthal said. Today scalp cooling is available at over 100 centers and it is approved for people with any type of solid tumor. However, it is still seldom covered by insurance.

“Getting FDA clearance was a major accomplishment, but it’s not enough,” Hornthal said. “HairToStay is here to level the playing field so that maintaining privacy and identity and a sense of well-being during chemotherapy is not limited to only those with significant means.”

Since 2015, HairToStay has given subsidies to more than 500 people. But this is just the tip of the iceberg. Horthal aims to offer $1,000 subsidies to 1,000 people in the next year, partnering with hair salons from coast to coast to raise both money and awareness—a true “hair roots” movement.

Dr. Hope Rugo, director of breast oncology clinical trials at the University of California, San Francisco, spearheaded the studies that led to the approval of scalp cooling in the United States.

Among the 1 in 8 women in the U.S. who will get breast cancer—with about a quarter million diagnosed each year—at least half will undergo chemotherapy that causes hair loss 100 percent of the time, Rugo said. What’s more, some of the drugs have a long-term effect on the hair follicles, making hair regrowth slow and sparse.

Traditional chemotherapy kills not only cancer cells but also fast-growing cells throughout the body, including those in the hair follicles, Rugo explained. Scalp cooling works by circulating a coolant through tubes in the cap, maintaining a consistent cold temperature that constricts blood vessels in the scalp and reduces the metabolism of hair follicles, making them less sensitive to the drugs.

“Hair loss is something women can have control over,” Rugo said. “From the grassroots, we can make it a national change in the way we take care of people with breast cancer.”

The highlight of the afternoon was testimonies from two women who received HairToStay funding to use automated scalp cooling during treatment.

Stephanie Wells, a professor and breast cancer survivor, said she didn’t want her students to be reminded that she had cancer every time they looked at her with a bald head.

“At a time when I had lost control over a lot of things in my life, I could look in the mirror and recognize myself,” Wells said. “I feel like I healed faster—it’s not just cosmetic.”

“I looked in the mirror and said, ’I’m still cute,’” concurred Carla Thomas, who used scalp cooling while being treated for Stage III endometrial cancer. Beyond that, she added, “HairToStay brought me a whole new community.”

We look forward to profiling these women, Dr. Rugo’s team, and HairtoStay in an upcoming issue of Cancer Health.