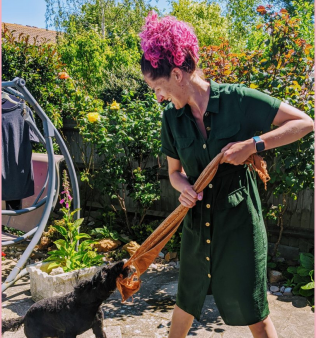 Today was a day for some fun in the sun. Courtesy of Amanda Hayes

It’s been nearly a year since I last decided to do a blog post. I didn’t intend for it to be this long, but I needed a break.

Last year was a very unhealthy year for me. Not physically but very much so mentally. I think I spent so much of my cancer time in denial that it was bound to catch up with me. I got to a point where I was just sick to death with everything to do with cancer.

In the beginning, I was so keen to use my story to help others that I wasn’t really thinking of the amount I was taking on. I volunteered with charities and connected with so many within the cancer community that eventually it became a little overwhelming. My mood just plummeted knowing that I couldn’t do everything and that inevitably I was going to have to let people down. The beauty bus has been an idea that I’ve wanted to execute for so long, it just got lost under everything else.

By scaling back and concentrating on me for a bit I quickly brought things back on track. It hasn’t been a straight road back. I tried counselling for a bit, unsuccessfully. Medication – it just didn’t feel right for me. But with a lot of time and kindness to myself I found things just settled back into a good routine for me.

I’m sure you’re expecting this post to hold some mega news of some sort but that really isn’t the case. Things have been positively average of late. I couldn’t really of asked for a better outcome. Once you’ve danced with cancer and all its treatments it is very rare that you find yourself on the other side. And when I say the other side I mean healthy.

I was extremely fortunate in the fact that before lockdown even became a whisper I had my half yearly CT scan. I was so fortunate to get that in. By the following week my face to face appointment with my oncologist became a phone call.

My anxiety had definitely increased in the lead up to lockdown. I was terrified of catching the virus mainly because I wasn’t sure if I would be more susceptible to it because my lungs are compromised.

Thankfully, I didn’t have to wait long. The first Monday of lockdown was my telephone appointment, my scan was clear.

It’s unknown how the virus would affect me if I caught it, but they’re happy enough to class me as an “average healthy person”. At the end of the day, what more could I ask for?

Today is actually a day for celebration for me. It is my 2 year NEDiversary. A made up word by me. Most people seem to commemorate their cancerversary – the anniversary of the day they were diagnosed with cancer, but lately I’ve thought that one as being a bit weird. I don’t like remembering the day I was diagnosed. It was a shit time. I had been pushed from pillar to post of various appointments with no-one believing how serious my illness was. By the time they did stop and listen to me it was too bloody late and had progressed so far.

My aim now is to get to 5 years of No Evidence of Disease. Once I get that far then I can breathe a little easier.

5 years free of any form of cancer or treatment generally means you’re “in the clear” I’m not sure really if I’m ever going to be in the clear from cancer but it will feel damn good to shit on the crap stats that they give me.

Regardless of the shit stats I have, the way I see it, I wasn’t expected to survive 2 years and I have. It’s equally possible for me to survive way more.

I make my own stats now.

With my focus back where it belongs on my beauty bus, I’ve managed to progress so much more with the interior. If it wasn’t for our current situation I would most likely be up and running as a business.

Unfortunately, due to the lockdown though, it means the final touches to the beauty bus aren’t quite complete. I’m so close to being finished and I’m amazed with how far I’ve come with it. 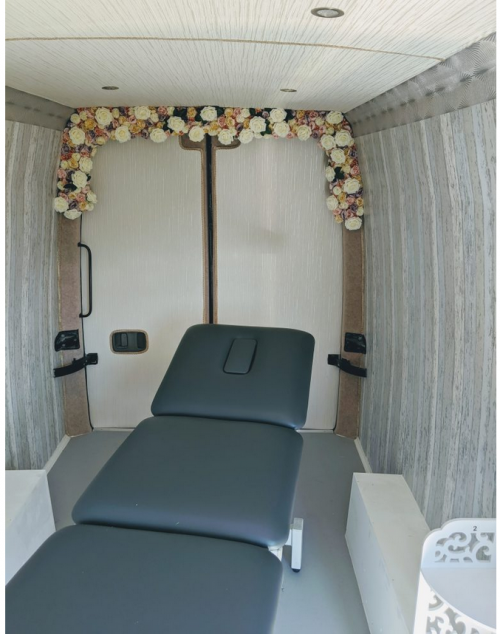 The wheel arches need finishing but I’m still playing around with what I’ll do with them.Courtesy of Amanda Hayes 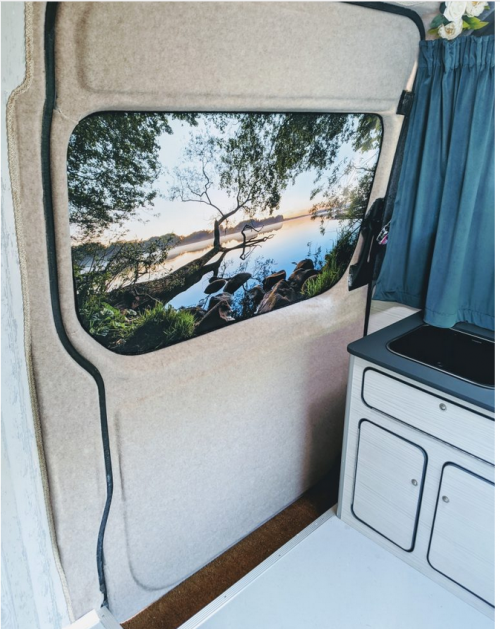 I’ve created a “feature window” opposite the real window with the hope of it being less claustrophobic and for it to create a relaxing space with the emphasis of being somewhere different.Courtesy of Amanda Hayes

Our current climate may mean that I will have to delay the launch of the bus. However, the fact that I am a one to one salon may work in my favour. It’s difficult to know how well it will work for me. I’m sure everyone is feeling the same whether it be as an owner of a business or an employee.

I really thought that I would struggle with the lockdown. It’s very reminiscent of my chemo days. I didn’t really venture out much then, there is this agonising fear that you’ll pick up some bug as your immune system is so shot but I guess because my immune system is now that of a healthy persons, my fears are not so overwhelming. At least this time I can enjoy some time out from routine.

All of it is progress at the end of the day. Progress to a normal life. I’m sure there will still be struggles here and there that will creep up on me and consume me for a bit but with any luck they will become less and less.

I’m incredibly grateful that I am still here to tell my tale.

Cheers to you for still being here with me after all this time and cheers to being 2 years free!

This post originally appeared on Happy Smiling Cancer Girl on May 21, 2020. It is republished with permission.