Heather Hazzan, SELF (Model(s) used for illustrative purposes only) 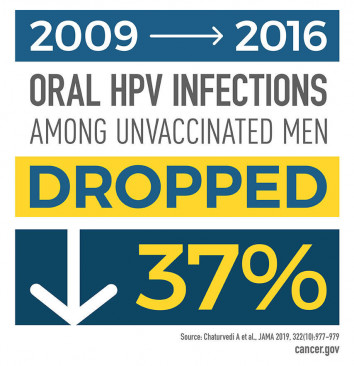 Courtesy of the National Cancer Institute

The potential benefits of vaccines are twofold: In addition to directly protecting those who get the vaccine, they also protect those who don’t. The latter, a phenomenon called herd immunity, occurs as more and more people get vaccinated, further restricting the ease with which the disease-causing germ can spread.

Now a new study suggests that the human papillomavirus (HPV) vaccine may be providing men with herd immunity against HPV infections of the throat. Oral HPV infections cause over 70% of all oropharyngeal cancers in the United States, and rates of these cancers in men have skyrocketed over the past several decades.

Between 2009 and 2016, rates of HPV vaccination in both males and females increased while rates of oral HPV infection among unvaccinated men dropped, the new study showed.

Results of the study, which was led by Anil Chaturvedi, PhD, and Barry Graubard, PhD, of NCI’s Division of Cancer Epidemiology and Genetics, were published September 10 in JAMA.

The findings “add to accumulating evidence that HPV vaccination prevents oral infection with HPV,” said Gregory Zimet, PhD, of Indiana University, who studies HPV vaccine uptake but was not involved in the current study.

That is “really meaningful,” Zimet added, because it is difficult to catch oropharyngeal cancers at their early, most treatable stages. More than half of oral cancers have already spread to other places in the body by the time they are discovered.

In 2009, Chaturvedi and his colleagues worked with the Centers for Disease Control and Prevention (CDC) to make oral HPV infections a focus of the National Health and Nutrition Examination Survey (NHANES), an ongoing health study of a representative sample of children and adults in the United States.

Since then, scientists have used data from NHANES to explore the epidemiology of oral HPV infections, including a 2017 study led by Chaturvedi that provided some preliminary evidence that the HPV vaccine may prevent oral HPV infections.

Because there is accumulating evidence for herd protection against cervical HPV infections, Chaturvedi and his colleagues wondered whether a similar phenomenon existed for oral HPV infections. To explore that idea, the researchers turned to NHANES data once again.

Between 2009 and 2016, nearly 14,000 men and women aged 18 to 59 participated in NHANES. Participants self-reported whether they had received the HPV vaccine and provided mouth rinse samples that were tested for 37 HPV types.

Gardasil, the most commonly used HPV vaccine between 2009 and 2016, protects against infection with four HPV types—two that cause most HPV-related cancers and two that cause genital warts. HPV vaccination has been routinely recommended for girls since 2006 and for boys since 2011.

During the time period of the study, HPV vaccination rates among NHANES participants rose from 0% to 6% for men and from 7% to 15% for women, the researchers found. Meanwhile, the prevalence of oral infections from the four HPV types covered by Gardasil went down by 37% among unvaccinated men in the study. The prevalence of oral infections with HPV types not covered by the vaccine, however, didn’t change.

Among unvaccinated women in the study, the prevalence of oral infections with all HPV types—both covered and not covered by Gardasil—didn’t change, the researchers found. Oral HPV infections were less common in women, making the rates too low to reliably estimate any changes over time, Chaturvedi explained.

Relying on participants to recall information about their vaccination status is a limitation of the study, Zimet pointed out. “It’s not the best way to assess whether someone has been vaccinated, but it is largely accurate and there’s no way to get around it … for this kind of study,” he said.

What This Means for HPV Vaccination

Although this study suggests that people who get vaccinated against HPV may provide some protection to those who don’t, that doesn’t mean that people should skip the vaccine, Chaturvedi noted.

These findings provide “preliminary evidence for a limited degree of herd protection that is much smaller than the direct benefit of getting vaccinated,” he stressed. Getting the HPV vaccine provides near complete protection from several cancer-causing types of HPV, he explained.

However, there are some people for whom herd protection is critical, Zimet noted, such as those who have an immune system disorder that precludes them from getting vaccinated or mounting a sufficient immune response to the vaccine.

“Establishing herd protection is really a social responsibility,” he said.

The bottom line, then, is that “every eligible individual should get vaccinated,” Chaturvedi said. CDC’s Advisory Committee on Immunization Practices recommends HPV vaccination for all boys and girls at age 11 or 12, and for people through age 26 if they weren’t already vaccinated.

But according to data from 2018, only 51% of teens have completed the HPV vaccine series, Zimet noted. A goal of Healthy People 2020, a government-led initiative to improve the health of all Americans, is to reach an 80% vaccination rate for HPV by the year 2020.

Does the HPV Vaccine Protect against Oral Infections?

An NCI-funded clinical trial of Gardasil 9—the most recent formulation of the HPV vaccine, which covers 5 additional cancer-causing HPV types—will determine whether the vaccine can prevent persistent oral HPV infections among men who are HIV positive. Oral HPV infections and HPV-related oral cancers are more common in men and among HIV-positive individuals.

“We are hoping that if we show efficacy of the vaccine, that vaccinating both males and females will ultimately reverse” the rising incidence of HPV-related oropharyngeal cancers, said one of the trial’s lead investigators, Anna Giuliano, PhD, of Moffitt Cancer Center. The trial is one of several within the US–Latin American–Caribbean Clinical Trials Network, an NCI-led effort to reduce the burden of HPV-related cancers in HIV-positive individuals.