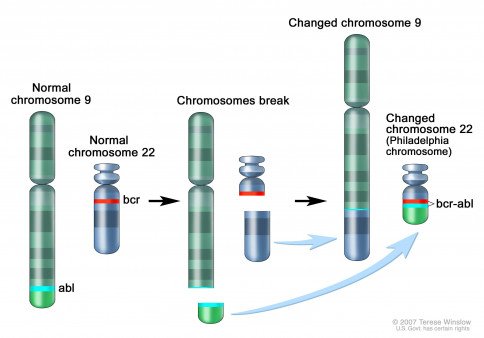 CML is caused by one translocation that creates a singular mutation, the BCR-ABL fusion gene or Philadelphia chromosome. National Cancer Institute/Terese Wilson

Gleevec was among the first of a new group of drugs—targeted therapies—that has changed the field of cancer research.

NCI-supported research led to a series of discoveries that resulted in the development of imatinib (Gleevec), a landmark drug that has vastly improved the outcomes of patients with a type of blood cancer called chronic myelogenous leukemia. These discoveries also helped establish a new group of drugs (known as targeted therapy) that has changed the field of cancer research.

Can Genetic Alterations Cause Cancer?

In the 1950s, scientists had a limited understanding of how genes influence cancer.

“It was a time when most investigators did not think that tumors were caused by genetic mutations,” wrote Peter Nowell, MD, then a researcher at the University of Pennsylvania.

Despite that paradigm, some scientists wondered: Can genetic alterations cause cancer? However, they lacked consistent evidence to support this hypothesis.

During that time, Dr. Nowell spent his days peering into the microscope, studying cancer cells from people with a type of blood cancer called chronic myelogenous leukemia (CML). Back then, patients diagnosed with CML were basically handed a death sentence. The available treatments were harsh, invasive, and not very effective.

Despite the popular belief that cancer was not caused by genetic changes, Dr. Nowell was interested in the chromosomes (structures that carry genetic information) of leukemia cells.

He searched through the University of Pennsylvania for someone who shared this interest, but came up empty-handed. Luckily someone introduced him to David Hungerford, PhD, then a graduate student at the Fox Chase Cancer Center in Philadelphia. Dr. Hungerford was studying chromosomes for his graduate thesis, so the two decided to collaborate.

Discovery of the Philadelphia Chromosome in Leukemia

In 1960, Drs. Nowell and Hungerford examined cancer cells from two patients with CML and noticed something peculiar—one of the 46 chromosomes was abnormally short. Though they had no clues as to how the short chromosome was created, or what its function was, the genetic alteration piqued their interest.

Curious to know if the small chromosome was a common feature in CML, they eagerly examined leukemia cells from more people with CML. Sure enough, they found seven more patients who had the same abnormal chromosome.

It wasn’t until the 1970s—when techniques for studying DNA improved—that researchers realized the Philadelphia chromosome forms when two chromosomes break and the pieces swap places.

A few years later, Nora Heisterkamp, MD, (then a researcher at NCI) and her colleagues discovered that when the Philadelphia chromosome forms, two genes that are normally separated get fused together. The hybrid (called a fusion gene) is known as BCR-ABL.

Owen Witte, MD, and his colleagues at the University of California, Los Angeles, later proved that when BCR-ABL forms in blood cells, it causes CML.

The discovery of the Philadelphia chromosome and BCR-ABL, supported in part by NCI, demonstrated for the first time that a genetic alteration could cause cancer.

Imatinib: A Therapy Targeted Against Leukemia

In the 1990s, Brian Druker, MD, of Oregon Health and Science University, was hoping to find a treatment for CML that, unlike chemotherapy, could kill cancer cells but leave healthy cells intact.

Maybe patients with CML could be treated with a drug that blocks BCR-ABL, he hypothesized. He reasoned that because healthy cells do not have BCR-ABL, they should not be affected by such a treatment.

Working with Nicholas Lydon, MD, who led a drug discovery group at a pharmaceutical company, Dr. Druker searched through an extensive collection of compounds for one that could do just that.

Remarkably, the pair identified a drug that was incredibly good at killing CML cells. In fact, it was far better than any other drug they investigated. The drug, named STI-571 and later renamed imatinib (Gleevec), blocks the activity of the BCR-ABL fusion protein.

In 1998, Dr. Druker and his colleagues tested imatinib in a phase 1 clinical trial partially funded by NCI. The drug caused cancer to disappear in the majority of patients with CML that was in the early, or chronic, phase of the disease. Five years later, 98% of patients from this trial were still in remission.

“For a lot of people, Gleevec was simply too good to be true. But these once-dying patients were getting out of bed, dancing, going hiking, doing yoga. The drug was amazing,” Dr. Druker said in a 2009 interview with The New York Times.

In 2001, the Food and Drug Administration (FDA) approved imatinib to treat patients with CML that has the Philadelphia chromosome. Today, someone with CML who is in remission after two years of imatinib treatment has the same life expectancy as someone who doesn’t have cancer.

In addition to transforming the outcome for patients with CML, the discovery of imatinib helped establish a group of cancer drugs, called targeted therapies, that are designed to attack cancer cells with specific genetic abnormalities.

Targeted therapies have immensely changed how cancer is studied and treated, and have fostered the precision medicine approach: treatment tailored to the unique genetic changes in an individual’s cancer cells.