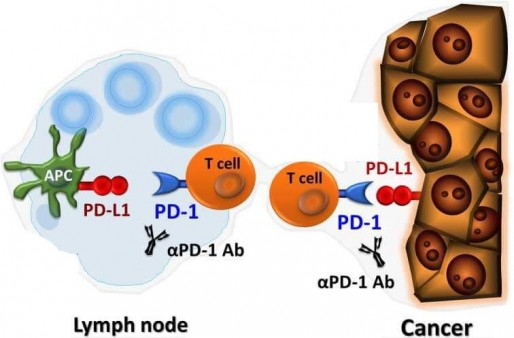 For some patients who are newly diagnosed with metastatic lung cancer, the combination of a treatment that helps the immune system to fight cancer—an immunotherapy—and chemotherapy may help them to live longer than chemotherapy alone, according to the results of a large clinical trial.

Pembrolizumab is one of a class of immunotherapy drugs known as checkpoint inhibitors.

The results, from the KEYNOTE-189 clinical trial, were presented at the annual meeting of the American Association for Cancer Research (AACR) in Chicago on April 16 and published concurrently in the New England Journal of Medicine.

Last year, the Food and Drug Administration (FDA) approved the combination of pembrolizumab and chemotherapy for some patients with NSCLC. But the treatment has not been widely adopted, in part because the trial that led to its approval was a small phase 2 study, said Roy Herbst, MD, PhD, of the Yale Cancer Center.

Clinicians have been waiting for the results of the phase 3 trial, noted Herbst, who discussed the KEYNOTE-189 trial during a plenary session at the AACR meeting. “And these results have exceeded all expectations.”

He and other experts at the meeting predicted that the pembrolizumab–chemotherapy combination would now be commonly used as the initial treatment for certain patients.

“This study represents a total change in the way we approach the treatment of patients with metastatic lung cancer,” said the trial’s lead investigator, Leena Gandhi, MD, PhD, of the Perlmutter Cancer Center at NYU Langone Health.

Patients were eligible for the trial if they had not been treated previously for advanced lung cancer and if their tumors lacked mutations in the ALK or EGFR genes. (Effective targeted therapies exist and are the standard of care for patients whose tumors have ALK or EGFR mutations.)

After a median follow-up of 10.5 months, the estimated median overall survival was 11.3 months in the chemotherapy-alone group but was not reached in the pembrolizumab-combination group.

Patients in the trial treated with pembrolizumab also lived longer without their disease progressing, with a median progression-free survival of 8.8 months versus 4.9 months in patients treated only with chemotherapy.

The addition of the immunotherapy drug to chemotherapy did not substantially increase side effects, Gandhi noted. However, more patients receiving pembrolizumab experienced a sudden change in kidney function, a condition known as acute kidney injury (5.2 percent in the pembrolizumab-combination group versus 0.5 percent in the chemotherapy-alone group).

Patients receiving the combination therapy—and especially patients who may be at risk for kidney problems—should be monitored closely for side effects, noted Arun Rajan, MD, who studies lung cancer in NCI’s Center for Cancer Research and was not involved in the study.

Testing a Combination of Immunotherapy Drugs

“This is a new era for non-small cell lung cancer,” Herbst said. The new results, he went on, build on decades of advances in treating lung cancer that began with chemotherapy, continued with targeted therapies, and have led, most recently, to immunotherapies.

But, despite this progress, many patients with metastatic lung cancer who initially respond to these treatments experience a recurrence, Herbst continued. “We’re doing well, but we can do even better by personalizing therapies.”

He noted that another clinical trial presented at the meeting (and published in the New England Journal of Medicine) could help move the field in this direction by providing information about a potential biomarker of response to immunotherapy called tumor mutational burden. This measurement is an assessment of the number of genetic mutations in a tumor.

The trial, CheckMate-227, included a comparison of the combination of two checkpoint inhibitors—nivolumab (Opdivo) and ipilimumab (Yervoy)—versus chemotherapy in patients with advanced NSCLC who had not previously received chemotherapy for their disease. Lung tumors were also assessed for tumor mutational burden.

Of the 1,004 patients for whom information on tumor mutational burden was available, 444 were found to have a high mutational burden. Among this group, the estimated 1-year progression-free survival rate was 42.6 percent with nivolumab plus ipilimumab versus 13.2 percent with chemotherapy. After a minimum follow-up of 11.5 months, patients who received the immunotherapy combination were 42 percent less likely to have their cancer progress or to die than those in the chemotherapy group.

Matthew Hellmann, MD, of Memorial Sloan Kettering Cancer Center presented results from the study, which was supported by Bristol-Myers Squibb and Ono Pharmaceutical, in Chicago.

Although longer follow-up is needed to assess whether combination immunotherapy extends overall survival compared with chemotherapy, Rajan said the ipilimumab–nivolumab combination “could be a potential treatment option for patients with NSCLC who have high tumor mutational burden, lack targetable genomic changes, and wish to avoid chemotherapy altogether.”

“This study builds on the progress we’ve made in precision medicine for lung cancer and validates tumor mutational burden as a biomarker,” said Hellman.

Both studies collected information on a different biomarker of potential response to checkpoint inhibitors—the levels of a protein called PD-L1 on tumor cells.

In CheckMate-227, patients with high tumor mutational burden benefited from the combination of nivolumab and ipilimumab regardless of PD-L1 level. In KEYNOTE-189, patients with high and low PD-L1 levels benefited from the pembrolizumab combination, “but there was increasing benefit with increasing levels of PD-L1,” said Gandhi.

She stressed the importance of learning more about how to “differentiate patients” and predict responses to immunotherapies. “PD-L1 could be part of that effort,” she added.

Both KEYNOTE-189 and CheckMate-227 increase “our understanding of the distinct molecular subtypes of lung cancer,” Hellmann said. “They are a huge step forward.”

To continue this progress, Herbst encouraged physicians to enroll their patients in clinical trials, including those in NCI’s National Clinical Trials Network, so that researchers can learn more about the distinct molecular subtypes of lung cancer and how to treat the disease.

This will take time, he added in an interview later. “We spent 20 years personalizing targeted therapies, and we are now moving toward personalized immunotherapies,” he said.

This post was originally published on April 27, 2018, by the National Cancer Institute. It is republished with permission.