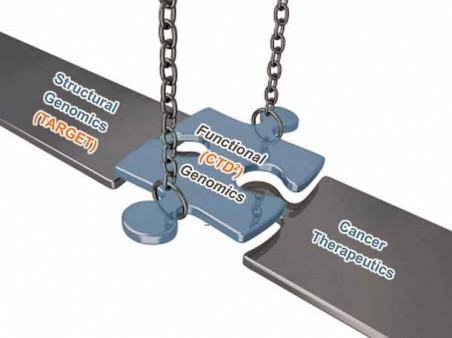 An example of collaborative science in Office of Cancer Genomics programs

Genomic initiatives such as the Cancer Genome Characterization Initiative (CGCI), The Cancer Genome Atlas (TCGA), and the Therapeutically Applicable Research to Generate Effective Treatments (TARGET) have generated an enormous amount of data. However, translating these genomic discoveries into the clinic remains a significant challenge. The Office of Cancer Genomics promotes interdisciplinary research to address this challenge and bridge the knowledge gap, in part through the Cancer Target Discovery and Development (CTD2) Network. The CTD2 Network develops new approaches to identify genetic alterations that potentially influence tumor biology and characterize the role of these alterations in cancer development. The Network has led to increased multifaceted collaborations, within the Network and among other large-scale programs. Recently, the CTD2 Center at Columbia University analyzed molecular characterization data from neuroblastoma (NBL) patient tumors, including the TARGET pediatric initiative, using predictive markers of risk for the development of precision oncology treatments for children.

NBL is an extracranial cancer that arises in immature nerve cells of the sympathetic nervous system in infants and children. It is a complex disease where clinical factors, such as age at diagnosis and stage, determine risk stratification. The landscape of genetic alterations in high-risk NBL has revealed a scarcity of recurrent somatic mutations, thus providing challenges for developing more targeted therapeutic strategies1. TARGET investigators had previously identified distinct subtypes in high-risk neuroblastomas using transcriptome profiles and gene mutations (including amplifications), however, it was unknown to what extent changes in gene expression levels affected tumor development. CTD2 Network principal investigator Dr. Andrea Califano, TARGET NBL Iead investigator Dr. John Maris, and their colleagues collaborated to identify master regulators (MRs) of high-risk disease in more than 300 patients. The team analyzed data sets from two independent cohorts: TARGET and the Neuroblastoma Research Consortium2. MRs (sometimes also called tumor checkpoints in cancer) are genes that control the downstream pathways, and in cancer MRs “integrate” the effects of the mutations and alterations thereby resulting in a transformed phenotype.

Dr. Califano and collaborators analyzed the expression data sets with the Master Regulator Analysis algorithm (MARINa) to identify subtype-specific MRs of NBL. They experimentally validated the bioinformatic predictions by inactivating the MR genes in vitro and in vivo. The outcome was the identification of a transcription factor, TEA domain family member 4 (TEAD4), which controls cell cycle and DNA replication as the core control unit of the tumor checkpoint3. Biochemical assays were performed to elucidate the organization of the MR transcriptional network, which detected several positive feedback loops, including one centered around TEAD4 and MYCN; the latter is an oncogene that is amplified in about a third of high-risk NBL tumors. TEAD4 was shown as a prognostic marker of poor survival, with activity independent of the established Hippo pathway (regulates organ size) transcriptional co-activators, YAP and TAZ. These findings suggest that TEAD4 may be a potential novel target for therapeutic interventions in MYCN-amplified subsets of aggressive NBL. This study highlights the importance of integrating structural and functional genomics programs to improve cancer therapies.

This article was originally published on April 5, 2018, by the National Cancer Institute. It is republished with permission.