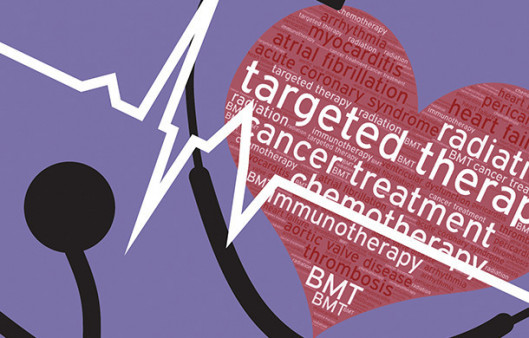 Investigating the Cardiac Side Effects of Cancer Treatments

Certain cancer treatments can damage the heart and the cardiovascular system.

In June, approximately 100 researchers attended a workshop on the campus of the National Institutes of Health (NIH) in Bethesda, MD, about an important but underappreciated side effect of some treatments for cancer: heart problems.

Certain cancer treatments can damage the heart and the cardiovascular system. These side effects, including high blood pressure, abnormal heart rhythms, and heart failure, can be caused or exacerbated by chemotherapy and radiation therapy, as well as by newer forms of cancer treatment, such as targeted therapies and immunotherapies.

“Cancer therapies affect a number of organs and organ systems, including the heart,” said Saro Armenian, DO, MPH, at the meeting. Armenian, who treats children with cancer at City of Hope Comprehensive Cancer Center, noted that when a patient develops cardiac side effects during treatment, a doctor may modify the dose of a therapy or stop the therapy altogether.

Some cardiac side effects, however, go undetected for years or even decades after a patient’s treatment has ended. “Patients diagnosed with cancer are living longer today than in the past, and many of these survivors are living long enough to develop late cardiovascular effects,” said Lori Minasian, MD, deputy director of NCI’s Division of Cancer Prevention, in an interview.

In recent years, Minasian continued, researchers have begun systematically to document the longer-term cardiovascular side effects of cancer treatments, also known as cardiotoxicities.

At the workshop on improving outcomes in treatment-related cardiotoxicity, participants from government, academia, and the private sector identified gaps in current knowledge and discussed priorities for future research. NCI and the National Heart, Lung, and Blood Institute (NHLBI) cosponsored the meeting.

Investigating a Range of Treatment-Related Cardiac Side Effects

The workshop highlighted a challenge for the field, which is known as cardio-oncology: identifying and investigating cardiac side effects that are associated with a rapidly changing landscape of cancer treatments and combinations of therapies.

For example, as more and more immunotherapies have entered the clinic in recent years, researchers have begun to detect specific cardiac side effects that can occur during treatment with some of these agents.

A recent study showed that a small percentage of patients who receive immunotherapy drugs called immune checkpoint inhibitor develop inflammation of the heart muscle known as myocarditis. In this study, about half of the patients who developed severe myocarditis died of it.

“In a small but significant number of patients, there is a fatal outcome from immune checkpoint inhibitors that is directly related to the heart,” said Javid Moslehi, MD, who directs the Cardio-Oncology Program at Vanderbilt-Ingram Cancer Center and led the study. (Other studies have estimated that the incidence of myocarditis in patients receiving checkpoint inhibitors is around 1 percent.)

While research on myocarditis from checkpoint inhibitors has “created a buzz,” many other cancer therapies can cause cardiovascular adverse events, he noted.

“We’re not paying enough attention to the other forms of cardiovascular toxicities from cancer drugs beyond doxorubicin,” Moslehi continued, referring to the commonly used chemotherapy drug that has been the focus of much cardiotoxicity research over the past decade. “We need to have a broader perspective.”

Susan Dent, MD, who codirects Cardio-Oncology at Duke University, agreed. Doctors and patients, she noted, need information about the potential cardiac side effects of cancer drugs when these agents enter the clinic.

“We don’t want to wait until a decade has passed and then design a study to learn about the cardiotoxicities associated with a cancer drug,” she said.

More research is also needed to help inform clinical decisions about cancer treatments and cardiac side effects. “Oncologists and cardiologists want to be able to implement evidence-based guidelines for patient care, but more studies are needed,” said Minasian.

The workshop included discussions of biomarkers of cardiac or cardiovascular damage, such as troponin, which is a complex of proteins that is released when heart muscle is damaged. These biomarkers were developed for patients with heart disease rather than for patients with cancer who may experience treatment-induced cardiac side effects.

As a result, it’s not clear whether biomarkers of cardiovascular damage could be used to assess the risk of cardiac side effects or to monitor cardiovascular health in patients being treated for cancer or in long-term survivors. “We don’t know if the patterns of injury from anti-cancer drugs are the same as the patterns of injury of de novo heart disease,” said Minasian.

Nonetheless, several speakers emphasized the need to establish the usefulness of biomarkers for assessing whether patients are experiencing cardiovascular damage from cancer therapies and how such biomarkers should be used, particularly given the existence of other tests, such as imaging tests.

“Right now, it’s not clear which combinations of biomarker and imaging tests should be used for which patients and when,” said Dent.

Aarti Asnani, MD, a cardiologist in the Cardio-Oncology Program at Beth Israel Deaconess Medical Center, said in an interview, “What we have now are broad and relatively nonspecific biomarkers of cardiac injury.”

She noted that developing new biomarkers will require “a deeper understanding of the mechanisms of cardiotoxicity as well as larger randomized clinical trials for validation.”

At the workshop, several participants also stressed the importance of learning more about how cancer treatments may harm the cardiovascular system. This information could be used to develop much-needed research tools, such as better ways to predict which patients are at risk of developing cardiac side effects as well as strategies for reducing this risk, Dent noted.

Large clinical trials that follow patients over time would allow researchers to gain insights into how and when longer-term cardiac side effects develop, Armenian noted.

One Example: Cardiac Side Effects and Breast Cancer

Over the past decade, breast cancer has been a focus of research on cardiac side effects, in part because certain treatments for the disease are known to cause these side effects.

Based on this evidence, the American Heart Association recently issued a rare scientific statement on cardiovascular disease and breast cancer. For some breast cancer survivors—older individuals in particular—the risk of dying from cardiovascular disease may exceed the risk of dying from cancer, the authors of the statement noted.

Dawn L. Hershman, MD, who studies breast cancer at the Herbert Irving Comprehensive Cancer Center at Columbia University Medical Center, agreed. “The reality is we’ve made a huge amount of progress in treating breast cancer, and today women diagnosed with early-stage breast cancer are more likely to die of cardiac disease than of cancer,” she said in an interview.

Although some breast cancer treatments, such as HER2-targeted therapies, doxorubicin, and radiation therapy, are known to cause cardiac side effects, other factors can affect a patient’s cardiovascular health as well, Hershman pointed out.

“A big part of the problem is that cardiac and vascular risk factors are not always well managed in patients with cancer,” she explained. “When a woman is diagnosed with breast cancer, her adherence to treatments for other health conditions often goes down, such as the management of cholesterol or keeping diabetes under control.”

The dual risks of cancer and heart disease in cancer survivors have created a challenge for both oncologists and cardiologists, noted Minasian. “The question is, can we manage the risk of both diseases to help people live healthy and productive lives?” she said.

Increasing Awareness of Cardiac Side Effects

With an aging US population and continued advances being made in cancer care, some researchers warned that cardiotoxicities are likely to become a larger concern in the coming decades.

Yet, several speakers noted that many of their colleagues in cardiology and oncology were generally unfamiliar with the cardiac side effects of cancer treatments.

“We need to engage all members of the health care team, including doctors, pharmacists, and nurses, to convey the importance of cardiovascular health in cancer survivors,” said Dent.

Patients and survivors need to be informed as well, added Minasian, noting that collaboration among researchers will be critical to making progress against cardiotoxicities. “We need cardiologists and oncologists to work together to answer basic questions about cardiotoxicities that neither group could answer working alone,” she said.

This post was originally published on September 21, 2018, by the National Cancer Institute. It is republished with permission.