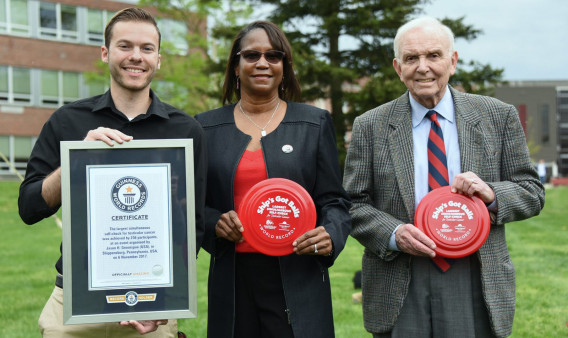 Jason Greenspan convinced over 230 college guys to examine their testicles… in one room at the same time.

Welcome to the Band of Ballers! In this series on ABSOT, I’m turning over control to some other ballsy testicular cancer survivors and patients who have inspired me with their work in advocacy and awareness during and after their diagnosis. This month’s feature is all about Jason Greenspan, who organized the Ship’s Got Balls event in November 2017. Enjoy!

My story started back in May 2012. I was only 18 and in my senior year of in high school. I already applied and been accepted to many colleges. The one I chose was Shippensburg University. (Editor’s Note: I was in my junior year of Shipp when Jason’s story begins. Our mutual connection to the University and ball(s) is actually how we got connected.)

I had just finished planning for my prom. In my friend group, I’m usually the one who plans everything! Planning for this was fun, but also a challenge. I already had the limo reserved, the schedule made, and was ready to have the time of my life. But little did I know that my life was going to change in an instant.

I was at home, watching television and had a simple itch.

It ended up being the most important itch of my entire life.

There was so much running through my head. Being diagnosed is something that I never thought would happen to me! I tried my best to hold back my feelings, but a couple of tears ran down my face, anyway. Without knowing about this type of cancer, the first question I remember asking him was, “How long do I have?” I started to remember random events in my life, from when I was a child, up until that moment. I wanted to cherish those memories—I feared there wouldn’t be many more.

After reading more information about testicular cancer, I quickly realized that it’s one of the most curable cancers out there.

I was lucky in that regard, but sometimes others aren’t.

The morning of my surgery, I went to the hospital, got checked in, and sat in the waiting room. My grandparents, mom, uncle, stepdad, and step-brother all were with me. It was incredible to have their support! Luckily, the surgery didn’t take long and I couldn’t wait to get home.

So now, after having my surgery, I thought that everything was okay, and my nightmare was finally over.

It turned out that it hadn’t even started.

After taking many more tests, such as X-rays, CT scans, and general checkups, it turned out that cancer had spread past my one testicle. Now with an official diagnosis of Stage IIA non-seminoma testicular cancer, I had to think of further treatment.

I had to meet with many oncologists until I found the one that would be the best fit for me. The one I chose, though, is phenomenal. He told my mom and me what will be happening and how to move further with my treatment. At this point, I needed to have chemo. I couldn’t believe it.

The first thing that I think of when I hear the word “chemo” is hair loss. I couldn’t imagine losing my hair. It’s something that had always been very important to me, and everyone who knows me knows that. That was my biggest fear of the entire experience… in the beginning at least. I found out that I needed to have nine weeks of chemotherapy.

My first day of chemo was okay. I remember walking in, sitting in the chair, getting hooked up, and asking my mom, “This is it? Chemo won’t be hard!” I later found out that this statement would be far from the truth.

Towards the end of my chemo treatment, I needed to have a lot of pricks from the needle each and every day I was there. I could have up to 6 pricks on a bad day, but it was still usually 2 or 3 pricks even on a good day. Unfortunately, this happened because after having chemo for so long, the nurses were no longer able to get a straight path with the needle. I remember one day when I was sitting in the chair, the nurses were trying to get the needle in my arm for me to receive my treatment. It was so bad that it must have been at least eight times!

All I kept thinking to myself was “Why me?” That day was the only day during the entire nine weeks that I cried, at my treatment facility at least. The only thing on my mind was going home and having this terrible nightmare be over.

All of the nurses at my treatment facility were wonderful, very kind, and caring people. They were not able to see me much, though. Whenever I went into the chemo room, I would always put my hood from my sweatshirt over my head—far enough so that my entire head would not be visible. By doing this, it helped me so I wouldn’t be able to look around, which got me sick. Every time I would see an IV bag or a person in one of those chemo chairs, my stomach would start to hurt. I joked after the fact, that if I went to visit the nurses after I was feeling better, they probably wouldn’t even remember me because they were never able to see my face!

The entire cancer experience has let me meet many amazing and inspiring people.

In my senior year at Shippensburg, I got the idea for an event, that would later become known as Ships Got Balls: World Record Attempt 2017. I realized how few college students truly knew about this type of cancer. It was also my last semester of college and I wanted to leave my legacy on the campus for all the work I’ve done with raising awareness for testicular cancer.

Ships Got Balls: World Record Attempt 2017 was a testicular cancer awareness event reminding males at Shippensburg University and in the surrounding communities to perform monthly testicular self exams. The event was a Guinness World Record Attempt for the “Largest Simultaneous Self-Check for Testicular Cancer.” The attempt took place at Shippensburg University on November 6, 2017. The first half of the event featured a fundraiser organized by the Interfraternity Council called, ‘Shave the Date’ to raise awareness for men’s health during the month of November, while the second half involved the actual mass self exam.

The attempt was designed to bring awareness and knowledge about testicular cancer to college students and to the surrounding communities.

This type of cancer seems to be uncomfortable for men to discuss and there is no reason for that. Instead, we all did it together and made an impact together!

We had many speakers at the event including the retired principal of Shippensburg Area Senior High School and also former Ship alumnus, Justin Birckbichler! (Editor’s Note: I didn’t even have to add the exclamation point – he did that on his own.)

All of the students in attendance had an incredible time and left more educated on self-exams, along with a fantastic experience with their friends and fraternity brothers.

We ended up getting 236 males to participate, which beat the previous record of 208 men. We officially received the Guinness World Records title, which was an amazing feeling! It was presented to the Testicular Cancer Awareness Foundation, Shippensburg University, and Summit Health. All of us partnered together to create this incredible event. If anyone is interested in having their university attempt the record, please let me know. I would love to work with you!

Testicular cancer is the most common type of cancer in males ages 15–44 years old. It is also 99% curable if detected early, which is why it is so important to discuss this topic with college students.