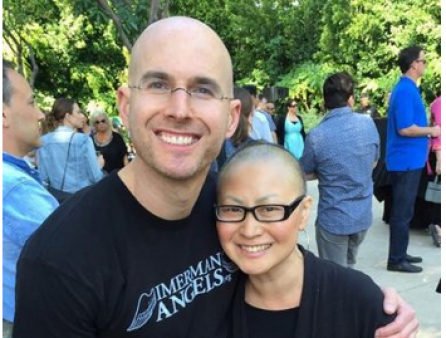 After his own testicular cancer battle, Jonny Imerman founded Imerman Angels to help support other cancer patients and survivors.

Welcome to the Band of Ballers! In this series on ABSOT, I’m turning over control to some other ballsy testicular cancer survivors and patients who have inspired me with their work in advocacy and awareness during and after their diagnosis. This month’s feature is all about Jonny Imerman, who founded Imerman Angels. Enjoy!

On a Thursday morning in October 2001, my world came to a standstill. At 26 years old, I was diagnosed with testicular cancer. Originally, I went to the doctor only because I was forced to. I had pain that was so intense in my left ball that flipped on like a light switch. I doubled over and couldn’t even stand up – biggest pain of my life without a doubt. But it probably saved my life and made me go in. I am so grateful for that.

Although the surgery to remove my left testicle went well, it soon became clear that the cancer had spread, or “metastasized”. The disease was making its way up my body.

I knew chemotherapy was next, but I did not understand what that meant. What color is it? How will it make me feel? I called my brother and started sobbing. I could barely talk. My world was shattered. But, I was not going to give up.

My oncologist told me that the treatments might make me sterile. So, I went to a cryogenics laboratory to bank sperm.

After that, it was time to start intense cycles of chemotherapy.

The treatment weakened my body and wiped out most of my white blood cells. In fact, I was in such bad shape, the doctors were forced to delay my chemotherapy while my body recovered between cycles. In addition, the chemotherapy caused many side effects: throat sores, mouth sores, skin rashes, dry skin, cystic acne, extreme fatigue, hair loss, numbness in my fingers and toes, and partial hearing loss.

But the most damaging side effect was a blood clot that developed in my left arm. The clot formed around my port, a medical implant that was an access point for my chemotherapy. The doctors had to remove my port, pull out most of the blood clot, and then pump me with blood thinners to break up the rest.

At last, after five months of brutal chemo treatment, I thought my fight was over. I slowly returned to the gym, started going out socially, and got back into life. Although I was happy to be alive, every day was a challenge. I did not have as much energy and I looked so different. I struggled to find my post-cancer identity.

Just as I was getting comfortable with myself, I learned that the fight was not over.

Nearly one year after chemotherapy, a routine CT scan showed four tumors along my spine. Rather than risk cutting the spine, the surgeon went in through the stomach. He made an 11-inch incision, placed my organs to the side, and took out each tumor. The surgery lasted for four hours. It was successful, and finally I was freed from the disease and able to begin my road to recovery.

But my journey was certainly not over. I had made a vow to myself during the time that I was battling cancer. I had looked at others in the oncology clinic and realized that I was different. Each day, my room was filled with family members, close friends and my great doctors. With so much support, I did not have a chance to lose hope.

However, in many of the other rooms, hope already seemed lost.

As I walked down the hall with my chemotherapy IV-pole on the way to the bathroom, I saw other people fighting cancer alone. They were lying in bed, motionless, watching television or staring in space. Their only stimulation was a nurse checking in for a minute or two on the hour. I knew this was not right. It upset me.

So, my vow was to start helping my fellow fighters in the simplest way that I could. I walked into the other rooms, one at a time, and introduced myself. “Hey, what’s up, I’m Jonny. What’s your name?” Although they were exhausted just like me, everyone was friendly and welcomed my conversation. We shared stories, emotions, and different opinions about many things in life. Our common bond? We were all fighting for life.

Although I had my network of support in my family, friends and doctors, once I started introducing myself to these fellow fighters I realized that they were providing me something valuable that my caregivers could not. From deep discussions about the fears with fertility issues to simply learning that sucking on Lemonheads candies alleviates the metallic taste from chemo, talking to others who also faced cancer was a powerful, insightful and uplifting tool.

I wondered: “What if every cancer fighter could talk to a cancer survivor who was uniquely familiar with their experience; who not only had beaten the same type and stage of cancer, but who also was the same age and gender as the fighter?” The cancer survivor would be an angel – walking, living proof that the fighter could win, too. What an amazing connection. This is why I created Imerman Angels.

What does Imerman Angels do?

Imerman Angels carefully matches and individually pairs a person touched by cancer (a cancer fighter or survivor) with someone who has fought and survived the same type of cancer (a Mentor Angel). Cancer caregivers (spouses, parents, children and other family and friends of fighters) also receive 1-on-1 connections with other caregivers and survivors. These 1-on-1 relationships inspire hope and offer the chance to ask personal questions and receive support from someone who is uniquely familiar with the experience.

The not-for-profit service is absolutely free and helps anyone touched by any type of cancer, at any cancer stage level, at any age, living anywhere in the world. Today, we have the largest network of cancer survivors in the world;more than 11,000 cancer survivors and caregivers who volunteer. They live in all 50 states, and over 60 countries. We help thousands of families with cancer, across the world, every year.

One on one cancer support works for one reason: we all BELIEVE. No one should fight this disease alone.

Be sure to connect with Jonny by visiting him at @ImermanAngels, @CLOZTALK, and @JonnyImerman. Until next time, Carpe Scrotiem!

This post originally appeared on A Ballsy Sense of Tumor on May 19, 2020.  It is republished with permission.