As Nick Fury put it, “There was an idea called the Avengers Initiative. The idea was to bring together a group of remarkable people, see if they could become something more. See if they could work together when we needed them to fight the battles we never could.” Coincidentally, back in 2008 (the same year Iron Man was released), a group of nine extraordinary women from the media and entertainment industries came together to form Stand Up To Cancer (SU2C).

Their goal was to use their unique skill sets and influence to to raise significant funds for what they call collaborative cancer research. Cancer is a complex issue that won’t be solved by one individual from one institution. SU2C wanted to create dream teams of multidisciplinary scientists from multiple institutions to focus on a very specific problem within the cancer space. By bringing the best minds to collaborate, innovate, and share their knowledge, they found they could accelerate the pace of cancer research. 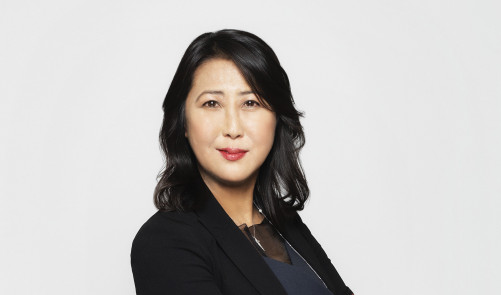 Since its inception, this unique research model has supported and funded more than 2,000 scientists and over 200 institutions worldwide. They’ve contributed to the development of nine new FDA approved cancer therapies for bladder, breast, colorectal, ovarian, pancreatic and prostate cancers, and difficult to treat leukemias for pediatric and young adults. They credit their focus on multidisciplinary research that truly breaks down the silos and spurs new discoveries as what sets SU2C apart.

I had the opportunity to speak with Dr. Sung Poblete, current CEO of SU2C.

Dr. Poblete said she was “affected by cancer very early on in my childhood. I was 10 years old when my aunt was diagnosed with breast cancer. That was more than 30 years ago where radical mastectomy, followed by radiation and chemotherapy, was the way of the world. Cancer patients were in the cancer ward for weeks and isolated. I visited her every single day after school. I was mesmerized by the healthcare workers that surrounded her. She really got a lot of support and compassion. That’s when I realized that I wanted to be part of that healthcare delivery system.”

Dr. Poblete lived that realization by becoming a nurse herself. Later, she was asked to join the teaching faculty at Rutgers University College of Nursing, which she calls “a tremendous honor, and it was where I was able to really hone in on being able to think outside the box, taking risks, and also learning what it really took to collaborate.”

She credits that role with preparing her for working at SU2C. Working in the nursing field helped her to “think about how do we prevent, how do we screen, how do we get people to stay healthy, which is very much a part of what we do at Stand Up To Cancer.”

The Stand Up To Cancer-selected Dream Team will consist of robust screening, research, education, and training efforts that will extend across the United States to establish three SU2C Zones: Greater Boston, Los Angeles, and Great Plains Tribal Communities in South Dakota. These zones, which will ideally operate long after the grant period is over, include diverse and distinct communities that are medically underserved and have particularly low screening rates for colorectal cancer, which is the second most common cause of cancer-related death in American men and women combined.

Calling back to the fact that no one individual can defeat cancer alone, Dr. Poblete highlighted that that’s true for organizations too. The SU2C Colorectal Cancer Health Equity Dream Team will receive a total of $8 million – $6 million from Exact Sciences and $2 million from Providence – for an innovative and comprehensive approach that will bring together leading researchers, patient advocates, community leaders, and clinicians to accomplish several goals, including improving colorectal cancer screening in medically underserved communities.

This team is a part of an overarching Health Equity Initiative. To date, the initiative has focused on increasing diversity in cancer clinical trials, initiating advocacy group collaborations and awareness campaigns, and funding research aimed at improving cancer outcomes and screening rates in medically underserved communities.

Colorectal cancer is the second most common cause of cancer death in this country, but with routine screening, it’s one of the most preventable cancers. This is also a cancer with really concerning disparities; out of all racial and ethnic groups in the U.S., Black people have the highest rates of colorectal cancer. Both Black and Hispanic people are typically diagnosed at a later stage in the disease, when it’s harder to treat.

Dr. Poblete added that, “Our entire paradigm has been about treating cancers at later stages, when there’s not a lot we can do. So we wanted to bring it forward and say, ‘What if we could intercept cancers at the earliest point, when cancer hasn’t necessarily taken hold? Or if we catch it at stage one or stage two, when it’s curable for colorectal cancer?’ When it’s diagnosed early, nine out of ten patients survive. But if you catch it at stage four, it’s one out of ten. We want the odds in our favor.”

And thus, the team was born. Their aim is to improve colorectal cancer screening in medically underserved communities. They wanted to make certain that we weren’t simply going into these communities saying, “You need to get colorectal cancer screening,” especially if the people were underinsured or if they didn’t have insurance. The grant allows them to provide at-home testing for free, and should they need a colonoscopy or should they need medical intervention, the team is able to follow them throughout their journey.

They will establish and implement a comprehensive at home stool-based colorectal cancer screening. By collaborating with community health centers, they aim to increase screening rates to 80% within the three aforementioned zones.

Dr. Poblete highlighted the importance of the at-home testing for an average risk patient: “We want this to be pandemic proof. When you look at the statistics for the first year during the pandemic, there’s a huge dip in preventive screenings. We haven’t rebounded fully, so that means three or four years down the line, we’re going to see more of the late stage colorectal cancer patients. That’s a scary thought. So we also want to ensure patients who have normal stool based screening tests receive the follow up colonoscopy.”

On a scientific level, they also want to build a collection of blood and stool samples for future research to ensure that racial and ethnic minority populations are represented in the development of new screening tests for early detection.

They also want to make certain to build towards the future by fostering careers of a new generation of Black, Latinx, and American Indian doctors and researchers, who really embody the ideals and are dedicated to community engagement, trust building, and disparities research.

The Stand Up To Cancer Colorectal Cancer Health Equity Dream Team has a lofty dream.

I asked Dr. Poblete for the moonshot goal and this is what she had to say:

“I love that idea of a moonshot goal, but I just say we’re going to outer space. We’ve been to the moon; we’re going to Mars. The dream is to create just one zone, which is the United States of America. Wouldn’t it be amazing if we could get all the screenings that individuals need done? That’s the dream.

But in order for us to do that, we need everyone involved. We need payers, we need institutions, we need corporations. We need philanthropists, and we need nonprofit organizations all coming together. Right now, we have three zones for our Dream Team, but we want to continue to grow it so those zones mesh together into one.”

It’s for sure a high mark to aim for, but judging from the passion I heard from Dr. Poblete, I know she, the SU2C Colorectal Cancer Health Equity Dream Team, and SU2C as an organization are a force to be reckoned with.

I also had the opportunity to connect with Dr. Anton Bilchik, one of the doctors leading the Dream Team, and I’ll be sharing that conversation soon. Spoiler alert – I learned a ton about colorectal cancer in our time speaking together.