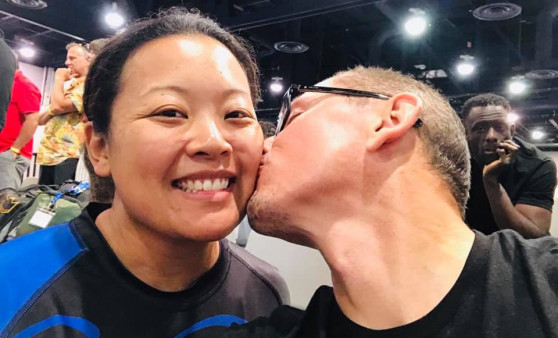 Tim giving me my good luck smooch before my fight

When you change your mindset, you can give yourself the reward of seeing a hard thing as an opportunity for growth through the adversity.

Yesterday, I competed in Las Vegas for the International Brazilian Jiu Jitsu Federation (IBJJF) World Master Championship. Jiu Jitsu competitors come from all over the place to put their training to the test and compete. It was my first big deal competition as a new blue belt and my bracket was pretty large — 30 ladies all around my same age and weight class. There was a brief moment of freaking out when I went to put my gi on and it finally sunk in that I was really doing this. But then Orlando’s reminder of “It’s just a thing” popped in my head and I let THAT sink in and chose to let the anxiety calm down.

I may or may not have freaked out the husband with how calm and relaxed I was being right before I had to officially weigh in and step into the bullpen (for you non-Jiu Jitsu readers — that’s the area the competitors have to wait in right before the fight.) I was quiet and collected — while others were warming up and putting their “mean mug” faces on I decided to sit and do something I’m not sure most competitors do — I prayed for my opponent. I prayed, win or lose, that me and the girl I was set to fight against, would be kept from injury and I prayed over both of us that we would come out of the match with both our heads held high regardless of the outcome.

Jiu Jitsu is a highly competitive sport. I knew I was going in there with a slight disadvantage being a newer blue belt and also because I had hurt my back training a few weeks ago and my body wasn’t 100%. I have been training for this for months and I wasn’t going to hand over the fight. You are supposed to fight for the win and trust me I fought my hardest! But at the end of the match the score was 5-2. I lost.

Did I lose my cool like I had seen earlier competitors do? Did I cry out of disappointment or growl in frustration or anger? Heck NO! I smiled at the tough woman I just fought with and I told her she was great to compete with — definitely a good match for me as she challenged me as much as I did her! And as we walked off the mat, she put her arm around me and let’s just say in very “colorful” language that she was a little mad at me because she didn’t realize how “strong” I would be and how she would have to go into her next fight exhausted because I gave her such a hard time. She had underestimated me when she was sizing me up in the bullpen and thought I was going to be an “easy” win. I laughed with her and wished her nothing but the best as she moved on to the next fight to get to gold and I told her I hoped we fought again in the future! And then I walked out of the competition ring with my head held high and a smile on my face because I had so much freaking FUN. I lost but — it’s just a thing.

I had three goals I set for myself before this fight: 1) get down to a lower weight class, 2) go for deep half guard (a position I’d been focusing on in my training) and 3) don’t tap out. I went down from 155 lbs in December (thanks chemo and steroids) to 135. I got to the deep half position I wanted to be in and got a sweep. I didn’t tap and I fought the whole 5 minutes. In the end, I lost by points and not by a submission. I met every goal I set for myself and I was happy with the result. Would it have been cool to win and get a chance to medal? Of course! But — it’s just a thing. Jiu jitsu isn’t going away anytime soon and there’s always next year to look forward to. In the mean time, I walked away knowing that I succeeded in what I set out to do and now I can go back to the drawing board and improve how I fight.

I could spend hours rewatching the video of my match and analyzing what I did wrong and how I should have moved. I could wallow in my loss and be upset that my back issues limited my movement . Folks, there’s a lot of what-ifs and should-haves, but at the end of the day….you got it: it’s just a thing. When you change your mindset, you can give yourself the reward of seeing a hard thing as an opportunity for failure or an opportunity for growth through the adversity.

“And we know that for those who love God all thing work together for good, for those who are called according to his purpose.” — Romans 8:28

Yesterday, my Facebook account did that thing where it showed me a memory from a few years ago. The picture shows me, well into my 3rd round of chemo at the time, surrounded by some of the fierce ladies I train with on my team back in 2017. Back then, I had no idea if I was going to be able to beat the cancer or if the chemo and radiation was going to make my body so weak that I wouldn’t be able to keep training. But two years later, I’m healthy and happy. I have days when the aftermath of chemo hit me harder. My body is still purging the chemicals and damage from the treatments, but I know that the recovery is slow and may take a few more years or I may not fully recovery completely. But — it’s just a thing. 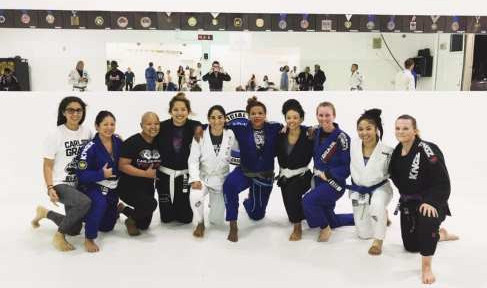 My head is so SHINY! Love my mat sisters!

Cancer is a killjoy — can I get an amen!?! But despite that short season for me, it has also given me opportunities that I would never had before. I’ve met new faces and experienced much more because my mindset has shifted. Another good friend said to me “You don’t have to — you get to.” No matter what I lose, how I feel, or what is going on — I get to choose how to handle it and how to react to it because that’s the only thing I can control. God has got the rest of it because I choose to hand that to over to Him. You, my friend, have that same ability. You can hang on to the regret, the bitterness, the disappointment, the hurt — or you can hand it over and lay it at His feet.

Going to end this one as a tribute to my favorite training partner: my husband. He fights later today! Thanks, babe, for being more anxious and nervous for me yesterday and being my loudest cheerleader even though I couldn’t hear you from the mat.

“Let me tell you something you already know. The world ain’t all sunshine and rainbows. It’s a very mean and nasty place, and it will beat you to your knees and keep you there permanently if you let it.

Now if you know you’re worth, then go out and get what you’re worth. But you gotta be willing to take the hits, and not pointing fingers saying you ain’t where you wanna be because of him or her, or anybody. Cowards do that and that ain’t you. You’re better than that!” — Rocky Balboa

This post originally appeared on Breathing Again. It is republished with permission.