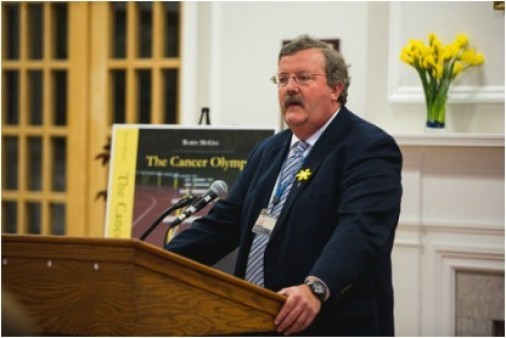 My late friend Larry Broadfield speaking at The Cancer Olympics book launch, just after learning his cancer had recurred

Larry Broadfield. I Can’t Go On. I’ll Go On.

I have a sad announcement to make. My dear friend Larry Broadfield died October 4, 2016, of colorectal cancer. He was 60 years old.

Larry spoke at the Halifax and Wolfville book launches of The Cancer Olympics. Six years in remission, he learned between the first launch and the second—only three weeks apart—that his disease had recurred in his lungs. During his speech, he told us about the lesion, and then announced that nonetheless he was getting married that summer. The crowd cheered and applauded him.

Larry was the lead pharmacist in the province responsible for cancer drugs. He devoted (and I mean devoted) his entire life to improving Nova Scotians’ access to best-practice chemotherapies for decades.

But Larry has a story—a shocking one that entwines painfully with the story described in The Cancer Olympics. During his life, he asked me to keep it under wraps. When I saw him at his only days before his death, in his living-room-turned-hospital-room, he asked me to share it once he had died.

When Larry was diagnosed with stage IIIC rectal cancer in 2007, he was a member of the then-in-place provincial committee that determined which cancer drugs were funded. Larry recused himself from the voting about FOLFOX when it first came up for consideration, given his condition. He was personally and professionally staggered when the committee voted not to allow it for curable rectal cancer cases in Nova Scotia.

As an expert in chemotherapy, Larry knew that FOLFOX was his best chance at cure. So he began his own letter campaign, begging the government and various officials to allow him to have it. He was writing to people that he had worked closely with for years—people he met at the workplace water cooler. But they refused him. Repeatedly.

Desperate, he evoked a little-known clause in the Canada Health Act. He could get FOLFOX if he could find a doctor in another province who would treat him with it—if that province allowed the drug for its citizens. Using his contacts, he found an oncologist in Moncton New Brunswick who would give it to him for the many brutal cycles he required.

It was winter. Driven by his son, every few weeks Larry drove across the frozen Tantamar marshes to be infused with FOLFOX for hours, and then to drive back home. Seven hours of driving each time. He said that they used to pull over to allow him to vomit in the snow. His son lost his year at university, so intense were Larry’s care needs.

When Larry was able to go back to work at Cancer Care Nova Scotia, he returned to his hard work striving to provide Nova Scotians with safe chemotherapies. But in his heart he struggled with the anguish and irony that he himself could not access the therapy he deserved in Nova Scotia—and that he and his family suffered tremendously.

And then the events of The Cancer Olympics took place. Many, many letters advocating for FOLFOX came to the Minister of Health. Officials approached Larry at Cancer Care Nova Scotia to help craft the government response. Larry again recused himself—he straightforwardly told the questioning officials that he could not be impartial, and could not weigh in on our request. But when his office door was closed, he was overwhelmed with emotion.

And then the day came when, due to our lobbying, that the relevant committee had to vote on extending the formulary to cover FOLFOX. Larry recused himself and sat out in the hallway, his head in his hands. When the door burst open at the end and a colleague crowed to him, “Guess what Larry? We just approved FOLFOX for Nova Scotia!” He looked up with a rush of emotion—relief for the public, followed by a wave of bitterness.

I met Larry for the first time when I was doing research for The Cancer Olympics. He was to teach me the pathways for cancer drug funding. But knowing I was the woman behind the FOLFOX lobbying, when he met me, he looked both ways down the hall before closing the door to his office. He poured out his story to me as I poured out mine to him. I remember saying to him, tearfully, that the FOLFOX triumph was truly his accomplishment. He was its first crusader and champion, and the first to put a personal face to it for his colleagues. He replied that he failed in his appeal because he was only one voice. The Cancer Olympics community succeeded because we were many voices.

Larry believed that getting FOLFOX allowed him six quality years of life. But I cannot help wondering if the terrible stress of having to travel for his chemotherapy undermined the cure he could have had. Perhaps he would be alive today if he could have accessed it more easily. I pray that, thanks to our advocacy in making this drug available in Nova Scotia, many other Larrys were spared such hardship—and perhaps saved thereby.

Larry worked hard for Nova Scotia until the very end. Even though he has been bedridden for months, it was only three nights before his death that he thought it was time to formally step down from his role... and he added that he would be happy to remain in an advisory capacity! Larry was my mentor and hero. He taught me how to face cancer and death; he was remarkably open about both. True pharmacists, he joked, can talk about anything.

Larry’s death has taken the stuffing out of me. It has made me feel weak and winded. And lost. Every cancer death is devastating in a unique way to survivors, but this one brought me to my knees. Larry is the only person I ever met diagnosed at the same late stage as myself. His survival was my beacon of hope for many years. Today, I mourn a great man, a great fighter, a great colleague, and a fast friend.

What is that line from Samuel Beckett? “I can’t go on. I’ll go on.”

This blog post originally appeared on The Cancer Olympics. It is reprinted with permission.