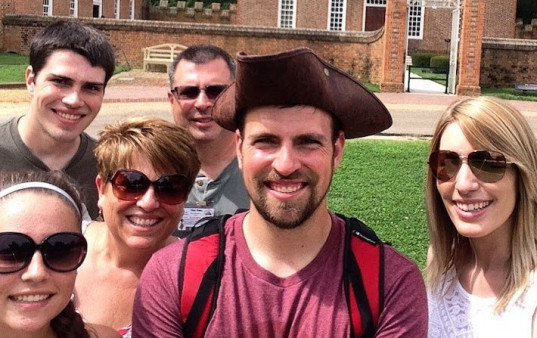 I thought I had testicular cancer, but how did I tell my close friends and family?

In my life, I have people cordoned off into different groups: my family, my groomsmen, my old school friends, my current school friends, and my digital friends (friends who I have grown close with online). Only about four people even knew about the initial doctor’s appointment, but most of my friends were not up to speed yet. With surgery in two days, I knew I had to tell those closest to me in case something went wrong.

No two people took the news the same way. Some were inwardly emotional, some helped keep spirits up, some said things to the effect of “you’ve got balls to do this” (dad and best friend), but all were supportive. I didn’t want pity and I didn’t feel pitied. I felt cared for and supported, which is what I needed.

Telling my family I thought I had testicular cancer

Most surprisingly to many people was that I hadn’t told my family anything until this point. As a common theme, I didn’t want to worry them if it all turned out to be fine, especially because the first few doctor’s visits weren’t definitive. My maternal grandfather passed away from renal cancer in 2013, and it has had a lasting impact on my family. Because of this, and the other times cancer has touched our family, I am always hesitant to even say the word, let alone mention that I might have it.

I don’t often call my mom or dad, but I text with them throughout the week. Usually, when I call them, it’s not for a particularly positive reason (I got a speeding ticket, I need to go get stitches for cutting my finger open, I got another speeding ticket, I’m going to leave my job, I got a third ticket…).

When I asked my mom if I could call her, she knew something was up. She was at a field hockey game but called me as soon as it was over.

“I most likely have testicular cancer.”

There were no tears. Just silence. I don’t know what was worse. After a few moments, she spoke again. This time it was with determination.

“Grandpa always said, ‘Just tell me what to do and I’ll do it.’ You need to adopt that attitude as your own.” Losing my grandfather at 22 was really hard on me, and three years later, his mantra had come back to me to help guide me forward.

Next up was my dad. He was home with my brother, who I didn’t want to tell quite yet. He answered his phone on speaker.

“Hey, Dad, I have a question about my table saw. Can you take me off speaker?”

“Why can’t you ask me on speaker?”

“Just do it.” I shared the news with him, but he couldn’t respond without clueing in my brother.

After the surgery was complete, I did tell my brother. As opposed to the calls with my mom and dad, my brother and I merely texted about it. Maybe this was because we are not all that close, or maybe it was because deep down I knew he was at a higher risk for also developing this cancer than anyone (especially my mom and my sister). He responded by saying, “I know we are not that close, but you are my big brother. I will always love you and you will get through this.”

The hardest family member to tell was my sister. My sister and I are incredibly close, even though she is nine years my junior. Earlier this year, she lost a friend to a random medical emergency and I knew hearing that her brother was sick as well wouldn’t be easy for her to take. I decided to wait until after the surgery was over to break the news. As I was recovering, I FaceTimed her and started right in:

“Goober, I have something to tell you. I was in the hospital today.”

Tears broke out immediately. “I hate hospitals,” she sputtered. As what would quickly become second nature when sharing my diagnosis, I began reassuring her.

“I will be ok. They think I have cancer, so they removed it. They hope they got it all, but I might need chemotherapy.”

After talking with her more, she calmed down and showed a strong resolve. We ended the call on positive spirits.

Telling my friends about my testicular cancer suspicions

My family taken care of, I moved on to my groomsmen, who are scattered between Pennsylvania and Maryland. Time was of the essence, so a quick text message was all. I kept it brief: “I most likely have cancer. I am getting surgery to get it removed. I will keep you posted.” They responded with shock, but in solidarity.

I also wanted to let the few former coworkers who I maintained close contact with, even after departing my old school, know what was going on. The tricky part was telling them all at the same time, so one didn’t find out ahead of the others. I was able to text some of them and call one on the way to work. Again, they were beyond surprised and wanted to offer support.

My current fourth grade team also needed to be told, as they were beginning to notice that I was leaving school frequently. I shared the news with them as I left the pharmacy via a group text. I kept it brief and to the point. The following day, each of them came to me individually and offered their support. They also ensured I would be kept fed through this process. As a man with an appetite that knows no bounds under normal circumstances, that was one thing I was highly pleased to hear.

Although my “digital friends” are listed last here, they actually were among the first to know. Some people don’t understand the bond that can forged online between two people with commonalities, no matter the physical distance or lack of “in real life” interaction. Most of my communication with these people is primarily text based, but I probably had just as much verbal interaction with them during this period as with the other groups. Even though they couldn’t physically do much to help, they wanted to and were determined to find ways. Some of them opted to send me a care package, while one entertained me with endless ridiculously bad puns. They kept “living in my phone” and checked on me frequently.

While I don’t like to burden others with my problems, it felt good to let people in and feel the love and support of others.

Click here to read the next part of my story, in which I go under the knife for my surgery.

On Thursdays, I am chronicling my journey from discovery to the beginning of chemotherapy. To read through my story up until this point, please click here.