Three weeks’ worth of pills

What’s in YOUR Medicine Cabinet?

I’m pretty sure that once I post this, a friend or five with cancer is going to suggest something else I should take.

Every now and then something happens, and it’s like a slap in the face. This time, I can thank my medicine cabinet.

I’ve made it a habit of using those little pill minder weekly containers to keep my pills straight, with a separate container for each time of day. With the number of pills I take, this improves the chances I won’t be walking into walls or making surprise trips to the ER. While I knew there were a lot of pills, I’ll tell you about my wake-up call.

Genevieve and I recently had a trip that was just over two weeks. That meant filling the pill containers for three weeks. Using an Excel spreadsheet, a slide rule and an abacus, and after making sure I was well nourished, I set about filling these containers. When I was done, this is what I had: 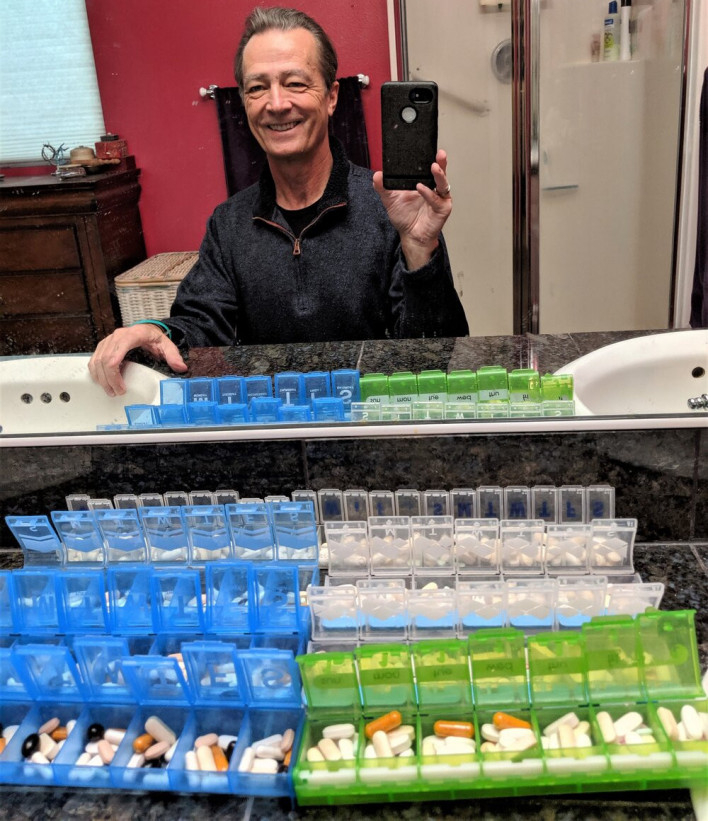 This was stunning enough for me, even though I’m the one taking them. But it really hit home when I was talking with Brett and Greg, a couple of friends at work. One was saying that a relative had to start taking two pills a day instead of one. To put that into perspective, I showed them my picture.

Have you ever HEARD a jaw drop?

Both my own shock and theirs had me questioning what I’m doing. It was enough to make me want to do the math. Thirty-two pills a day! Seventeen different kinds of meds! Am I NUTS?

Here is what I found:

After completing this review, it looks like I’ve chosen Door Number Two, which means I’m still delusional enough to believe I’m sane. While the number of pills seems ridiculous, there’s nothing on the list that I believe I should stop taking. In fact, I’m pretty sure that once I post this, a friend or five with cancer is going to suggest something else I should take.

The point is that those of us with an uncertain future will try anything remotely plausible to help us stay alive. I can understand now how those snake oil salesmen from the frontier days were so successful. If there isn’t a cure, is there something that MIGHT help? A maybe is better than a no, isn’t it?

Here’s a good example. There is a growing number of lung cancer survivors that are fighting cancer by taking dog de-wormer. By sharing this with you I know I’m going to get two reactions. Those without cancer are going to be thinking, “That’s a good one Dann! Haha! A little far-fetched, don’t you think?” (So sorry for the pun.)

Meanwhile, those with cancer if they don’t already know about it, are going to be thinking, “How does it work? Has it worked with lung cancer? How much do I take?”

I will admit that I have done my homework to see if there is any research to support dog de-wormer. So far, it’s only case studies, so I’m not going there. However, I may change my mind if better research comes out.

I do have a personal “bottom” line, however. I always consult with my oncologist before taking anything, and I always consider the possibility that something could do more harm than good.

So what’s the moral of the story? For me, all this tells me that at least until we have a complete cure for lung cancer, we’re all going to the dogs, sooner or later.

So where would you draw the line?

This post originally appeared on Dann’s Cancer Chronicles. It is republished with permission.