My visit with the urologist this week went about as expected.

We talked about my PSMA PET scan results—negative—and he was of the mindset that those would be the expected results at my PSA level. The scan isn’t reliably sensitive enough when the PSA is hovering around 0.2 ng/ml.

With my steadily increasing PSA, he said that there’s cancer there somewhere. In his view, it’s likely location is still in the prostate bed, but we can’t rule out that there aren’t micro-metastases elsewhere.

In reviewing the totality of my case, he commented, “This is one of the trickier cases I’ve seen.” I don’t believe he was too offended when I replied, “No shit, Sherlock.” I guess my frustration of dealing with this over the years came out a little too strong.

What puzzled him about my case is how long after my surgery the PSA returned and how slowly it was increasing over the years. That led to a discussion about PSA doubling time and how my doubling time is shortening at an accelerating rate.

As part of that discussion, I asked him how many data points should be included in the PSA doubling time calculations, and he typically uses only the last three to get a current snapshot of where it is now. (I re-ran my numbers when I got home, and using the last three PSAs, my doubling time is 19.9 months.)

Of course, the engineer in me had to play with that a little, so I went through my PSA spreadsheet and calculated the PSA doubling time if I used the last three values after each test. The results were all over the place: 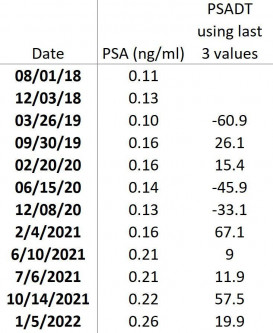 His recommendation, of course, was salvage radiation to the prostate bed.

He thought that salvage radiation still had a chance of being curative at this point, and given that I’m 64 years old, he thought that I would have plenty of years ahead of me should I choose to go down that path.

We talked about long-term side effects. He thought that there was a 20% to 30% chance that my stress incontinence would worsen, as would my sexual function given where it’s currently at now. He wasn’t confident enough to speak about the chances of rectal issues, at least in the numbers that I was seeking. I expressed concern about the incontinence, and he reminded me that they can take care of that with an artificial sphincter. Great. Another surgery.

I did ask how much longer I could kick this can a little farther down the road, and he didn’t seem to think that that was a good idea at this point. My stomach turned into knots.

We agreed to set up the consult with the radiation oncologist, as well as retest my PSA in early April.

Wednesday afternoon, I received a call from the scheduler trying to set up the radiation oncologist referral. She gave me the option of going to Naval Medical Center San Diego—where I used to work and had a previous referral—or going to University of California San Diego (UCSD). As good a medical treatment facility as NMCSD is, I opted for UCSD. If nothing else than for a second perspective, plus I believe UCSD will have more state-of-the-art equipment and a lower turnover rate in medical teams.

Thursday, morning, UCSD called and we’re set up to meet next Thursday, 17 February 2022. I was a little surprised when they told me that it would be at their Radiation Oncology center that’s about three-quarters of a mile (one kilometer) from my house instead of their main hospital in San Diego.

As you regular readers already know, I’ve been fearful of getting to this point for a while now. Whether my fears are irrational, unfounded or not, I don’t know, but they’re real for me.

My fears center more on having very real, quality of life-impacting side effects from the radiation than on whether or not the radiation will be curative. For some inexplicable reason, my gut intuition is that something will go awry and I’ll be in that 1% or 3% or 10%—or whatever it is—group that gets to experience those side effects impacting quality of life. The radiation oncologist is going to have to give a strong sales pitch to convince me the risks are minimal.

There will be ton of soul-searching and thinking in the days and weeks ahead.

This post originally appeared on Dan’s Journey Through Prostate Cancer on February 11, 2022. It is republished with permission.