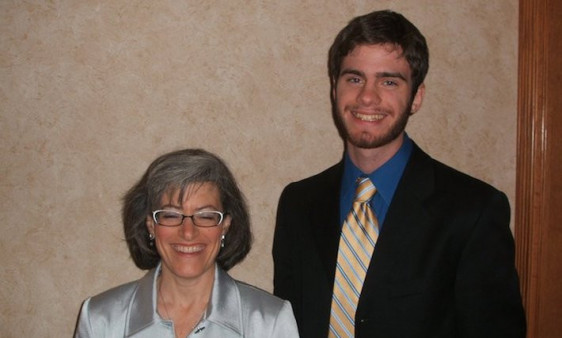 Nancy and Jaimeson in his junior/senior year of high school

Welcome to the Band of Ballers! In this series on ABSOT, I’m turning over control to some other ballsy testicular cancer survivors and patients who have inspired me with their work in advocacy and awareness during and after their diagnosis. This is a special edition, featuring the the first female member of the Band of Ballers, Nancy Balin. She founded the Family Jewels Foundation in honor of her stepson. Enjoy!

He had had symptoms of pain and swelling in his testicles for upwards of a year, but he was “too embarrassed to tell mom.” We had his course of treatment managed by Dr. Einhorn at Indiana University–Purdue University Indianapolis. He went through four cycles of BEP chemotherapy in Seattle and then multiple life-threatening surgeries in Indianapolis, including an RPLND (Retroperitoneal Lymph Node Dissection — a surgery to remove affected lymph nodes). Thankfully, he was declared in remission by age 15.

Over two years passed, and he had not had a testicular cancer recurrence.

Due to this, his surveilling oncologist (not Dr. Einhorn) began saying, “If it hasn’t come back by now, it won’t.” The doctor was so convinced of this that he actually missed the recurrence when it happened, after 4 ½ years of remission when Jaimeson was 19. When we saw some college pictures of Jaimeson, we knew he didn’t look right. It turned out that one of his markers had risen into the 80s. He went through four cycles of BEP again, high-dose chemotherapy with stem cell rescue, and multiple additional surgeries. But this time we couldn’t beat it, and Jaimeson died on October 7, 2010, at age 20.

When he knew that he was dying, Jaimeson asked us to give his college savings to his two younger sisters for their schooling. His request inspired me to endow a scholarship in his memory at his college, Washington State University. This scholarship was to be awarded to a student who had had a sibling with cancer. Almost as soon as the papers were signed, we had our first scholar! Since then, we also have endowed a scholarship in Bothell, Washington, where we are from, and currently we are helping put three local students (who have had a sibling with cancer) through college.

As the years have passed, I have become even more “ball(s) to the wall” with testicular cancer awareness.

I am very active in teaching boys and young men about the symptoms of testicular cancer and the importance of both monthly self-exams and medical provider testicular examinations. Although Jaimeson had a sports physical seven months before his initial diagnosis, the family practitioner he had been seeing for years did not perform a testicular examination. (Editor’s Note: Sadly, the study I ran found this to be common. When I talked to the Cleveland Clinic about possibilities of why, they said that doctors are just asked to do too much nowadays.)

Given that one of Jaimeson’s cancer types was non-seminoma, which doubles in size every 10-30 days, that massive oversight and the resulting loss of seven months of diagnosis and treatment time has haunted me ever since.

Now, I find myself “talking testicles” all the time.

My heartfelt motto is “I couldn’t save my own boy, so I’m trying to save yours.” Whether it’s the Boy Scouts, various Chambers of Commerce, retired folks (Don’t forget, they have grandsons and nephews and sons and sons-in-law), Rotary clubs, local employers, school health classes (still working on that), or anywhere else that boys and young men (and their families) gather, I lead the charge for helping young men to learn about testicular cancer.

I bring Nut Notes (“Check Your ‘Nads, Lads!” “Too Chicken to Check Your Nuggets?” “Swelling is Telling!” and more), Nut Sacks (bagged peanuts), informational brochures, self-check reminder shower cards, and my tongue-in-cheek humor and driving passion to keep other families from going through what my family experiences every single day.

Ever seen a Nut Hut? I take this mobile self-check station on the road to many of my talks and fundraising events, and the Family Jewels Foundation (the charity I founded) recently won “Most Imaginative” for our float, featuring the Nut Hut, pairs of balloons and blown-up rubber gloves (get it?) in a popular local summer parade.

I also have developed two annual events to help this mission. Every March on the second Saturday (Jaimeson’s birthday is March 14), I put on the Family Jewels Pie-K, so named because of Jaimeson’s Pi(e) Day birthday and the fact that we are the #only5Kwithapietable. On March 9, 2019, we will put on our ninth annual event.

A newer event is coming up fast on November 10, when I will put on the Family Jewels Kenmore Ball Crawl. At this fun, family-friendly event, three local craft breweries donate taster trays of their brews, and people receive testicular cancer info, “Nut Sacks,” and other swag in their swag bags.

Because of Jaimeson’s needless and tragic death, I am absolutely compelled to educate about testicular cancer.

This disease essentially was cured 15 years before my boy was born. I am so driven, in fact, that I left the government-lawyer career I loved in order to talk testicles full-time. There is a glaring gap in education about testicular cancer. It doesn’t have national prominence or its own “Pinktober” like breast cancer awareness does, and this omission is further exacerbated by young men’s sense of invincibility and their embarrassment about these sensitive body parts. Most of my Nut Notes are funny, but there is one that isn’t: “Don’t Be Embarrassed to Death.”

What can young males do to take charge of their own health? Make sure you have a medical provider do a testicle exam annually. Check your own testicles every month, and see a urologist right away if they hurt, have lumps or bumps or have either shrunk or grown since the last time you checked them. Most importantly, please don’t wait! People who love you are counting on you to take care of yourself, and this includes making sure your testicles are healthy, too.

Remember, “Smooth and Round Is Healthy and Sound!”