The first clinical trial will test a therapy designed to target a protein on cancer cells in young people with acute myeloid leukemia.

In 2010, an NCI research team published the first study of a new form of cancer treatment called CAR T-cell therapy, reporting on a single patient with advanced lymphoma whose disease, they recounted, “underwent a dramatic regression” following the treatment. The next year, researchers from the University of Pennsylvania reported a similar result using CAR T-cell therapy to treat a patient with an advanced form of leukemia.

These cancer treatments have captured public attention, and researchers’ imaginations, like few others. In part, that’s because of the remarkable way they can eliminate cancer in some people with advanced blood cancers. It’s also because of where they come from: a patient’s own blood. Components of that blood are then used to create the treatment.

Transforming those components into the therapy that is eventually returned to the patient requires a highly complex manufacturing process. And that’s part of what sets CAR T-cell therapy apart from most other cancer treatments, explained Anthony Welch, PhD, a project officer in NCI’s Division of Cancer Treatment and Diagnosis (DCTD).

“With CAR T cells, the process is the product,” Welch said. That process is also expensive, complicated, and highly regulated.

That’s part of what makes conducting human clinical trials testing these individualized CAR T-cell therapies more challenging than those involving “off-the-shelf” drugs that are manufactured in massive batches. Few laboratories and centers have the capability to make CAR T cells, which has limited the ability to test them more broadly.

To help address these challenges, more than a year ago, DCTD and NCI leaders turned to their experts at the Frederick National Lab for Cancer Research (FNLCR) and tasked them with developing the capability to produce cellular therapies like CAR T cells for cancer. Specifically, the goal was to accelerate the ability to test these therapies in clinical trials to be conducted at multiple hospital sites.

The initial clinical trial supported by this effort will be the first trial to test a CAR T-cell therapy designed to target a protein on cancer cells called CD33 in children and young adults with advanced forms of acute myeloid leukemia (AML). It will ultimately enroll patients at six different sites, starting at the NIH Clinical Center in Bethesda, MD, and the Children’s Hospital of Philadelphia (CHOP).

Having multiple sites for the first trial will be good for both the investigators and the patients, said the trial’s co-lead investigator, Richard Aplenc, MD, of CHOP, where the first patient on the trial was enrolled in January.

“It will really expand access to this investigational therapy,” Aplenc continued. “We have sites on both coasts and in the middle of the country.”

And as researchers look to expand CAR T-cell therapy as an option for other cancers, including solid tumors, Welch said, lowering the barriers to their success will be critical.

“That’s the idea we’re trying to support,” he said. “We’re taking some of the risk out of [developing] innovative concepts and ideas by helping to bring more of these therapies into early clinical trials.”

From a Blood Collection to an Engineered Cell Therapy

In a nutshell, the manufacturing of a CAR T-cell therapy works like this.

First, a patient’s own blood is collected and the white blood cells from that collection are separated out, with the remaining red blood cells and plasma returned to the patient, a process known as leukapheresis.

Once the collected white blood cells are in hand, research groups use various methods to isolate specific T cells from the other white blood cells. Then, a disarmed virus is used to deliver genetic instructions to the T cells telling them to produce the chimeric antigen receptor (CAR), which ends up on their surfaces, and co-stimulatory molecules, which reside inside the cell. (By delivering signals that keep the T cells active, the co-stimulatory molecules help the CAR T cells to survive and grow once introduced back into the patient.)

Next, this small batch of CAR T cells is induced to multiply until they number in the millions, a process that is carefully monitored to ensure that they grow enough in number to achieve the appropriate “dose” of T cells.

The final step in the manufacturing journey requires some important housekeeping to ensure the purity and quality of the CAR T cells, at which point they are ready to be infused back into the patient.

At the moment, only a small group of research labs have the ability to make CAR T cells, said Nirali Shah, MD, of NCI’s Center for Cancer Research, the co-lead investigator on the CD33 CAR T-cell trial.

“You can’t just manufacture cells in any lab and give them to patients,” said Shah, who has led several trials of CAR T-cell therapies in children with blood cancers at the NIH Clinical Center in Bethesda, MD. “You need to have the infrastructure and the support and the knowledge to be able to do this well.”

With an existing facility, the Biopharmaceutical Development Program (BDP) at the FNLCR in Frederick, MD, for manufacturing biological products, Welch said, there was an opportunity for NCI to help meet a critical need to help accelerate CAR T-cell research.

What the program didn’t have, however, was experience manufacturing CAR T cells.

Having some of the country’s leading experts in developing and testing CAR T-cell therapies at NCI helped with the first step. Shah and her colleagues in NCI’s Pediatric Oncology Branch (POB) were already working on a CD33 CAR T cell that they were moving toward a trial for children with AML. This specific CAR was initially developed by Terry Fry, M.D., formerly of the POB and now at the University of Colorado School of Medicine.

“When the CD33 concept was first developed, we were all thinking it would be a single-center phase 1 trial, because we previously did not have the infrastructure to plan for a multicenter trial,” Shah said.

But the community of researchers like Shah and Aplenc, whose work focuses on developing and testing treatments, including stem cell transplants, for children with blood cancers is highly collaborative, she said. And with the NCI manufacturing initiative coming online, she added, “there was now a mechanism to think about a multicenter trial.”

That research community includes the Center for International Blood and Marrow Transplant Research, which came on board as the trial’s primary sponsor, and the National Marrow Donor Program, which will manage its overall conduct (e.g., overseeing and coordinating the shipping of cells, monitoring patient safety).

Next, it was time to nail down the manufacturing process. The location had already been identified: the BDP, which manufactures drugs and therapies from biological sources, such as bacteria and proteins, for research studies.

The NCI team then turned to NIH for manufacturing expertise. The experts they consulted included David Stroncek, MD, and Steve Highfill, PhD, of NIH’s Center for Cellular Engineering, which has extensive experience developing and manufacturing cell therapies, including CAR T cells, for investigators within NIH.

“Their expertise and experience was invaluable,” Welch said.

Armed with this guidance and feedback, the NCI team decided to use a relatively new, commercially available system for manufacturing CAR T cells.

The system, called Prodigy, is “closed,” meaning that once the collected cells from the patient are put into the system, it takes care of the rest, producing a completed CAR T-cell product within 2 weeks, explained Jason Yovandich, PhD, also of DCTD.

Up to this point, most laboratories and the companies that manufacture the two FDA-approved CAR T-cell therapies have used “open” systems, which require more manual manipulation to produce a final product. With a closed system, Yovandich said, “the only variable to account for is the patient cells going in.”

Currently, NCI has two Prodigy systems, with plans to add a third. Depending on how this initiative progresses, more could be added, he said.

Numerous clinical trials of CAR T-cell therapies have been conducted at CHOP. Aplenc said that, not unexpectedly, there are differences conducting a trial when the treatment is not being manufactured in house. But for a multicenter trial, a single manufacturer seems to be the ideal choice.

“If NCI was not doing the cell manufacturing, it would be extremely challenging to do this [multicenter trial],” he said.

Aplenc said he doesn’t expect any issues with having the CD33 CAR T cells made at a single location. Even when a CAR T-cell therapy is produced in house at a single institution, there are always logistics to deal with. For example, the manufacturing time “is driven by the current queue at that center, which can be driven by patient volume and manufacturing throughput,” he said.

And even as the manufacturing of CAR T-cell therapies becomes more automated, which is expected to increase the number of labs involved in research involving these therapies, a centralized approach can play an important role in human clinical studies of new treatments, Shah noted. “I think a model like this has so much promise,” she said.

Welch emphasized that it’s still early days for the manufacturing initiative and that it will take time to see how it plays out. “We’re still taking baby steps,” he said.

Even so, it’s taken a lot of work and collaboration to get this far. “That’s what it takes to put something like this together,” he said. The collaboration “has been tremendous and critical to the progress we have made.” 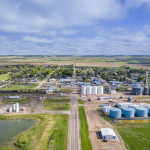