New Insight Into Nausea May Provide Relief for Cancer Patients

Researchers look at the neurons and receptors in a tiny brain structure called the area postrema, where the sensation of nausea is “felt.”

As anyone who has undergone chemotherapy or radiation therapy knows, nausea is a frequent and distressing side effect and anti-nausea medications do not always work. Effective remedies for nausea are critical for cancer patients’ quality of life and ability to continue with treatment. But as with many types of pain, such remedies require a better understanding of the neural pathways that produce the sensation.

At Harvard Medical School, Damon Runyon Fellow Chuchu Zhang, PhD, and her colleagues are zooming in on a tiny brain structure called the area postrema (AP), where the sensation of nausea is “felt.” The structure is located on the surface of the medulla, the lowermost part of the brainstem, which connects the brain to the spinal cord. The AP’s location, and its highly permeable blood-brain barrier, allow it to detect chemical messengers circulating in the blood and “translate” their messages into neural signals.

Last year, Dr. Zhang and her team used advanced single-cell DNA sequencing tools to generate a map of every cell in the AP detailed with its genetic data (also known as a “cell atlas”). From this map, they identified four neuron types that are excitatory, meaning they activate other neurons, and three neuron types that are inhibitory, meaning they suppress other neurons. The excitatory neurons in the AP have receptors (such as GFRAL, labeled in the diagram below) that, when bound, induce nausea-related behaviors such as vomiting and food avoidance. For a while, the role of the inhibitory neurons in the AP remained unclear. 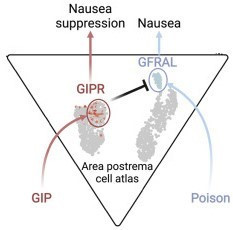 The excitatory neurons in the AP have receptors such as GFRAL.Damon Runyon Cancer Research Foundation/Chuchu Zhang, PhD

Now, the team has demystified the other half of this neural circuit, revealing potential therapeutic targets for nausea intervention. In response to food, the small intestine releases a hormone called glucose insulinotropic peptide (GIP) to stimulate insulin production and lower blood sugar. As the team discovered, this hormone also activates the AP’s inhibitory neurons, which in turn suppress the nearby excitatory neurons, preventing the sensation of nausea. This discovery suggests a new approach to managing nausea: mimic the body’s own anti-nausea strategy with a drug that can do what GIP does.

The mechanistic understanding of nausea provided by this study brings us closer to a world where chemotherapy is not synonymous with nausea. While advances in precision medicine seek to replace chemotherapy altogether, researchers like Dr. Zhang and her colleagues can aim to help patients feel better in the meantime.

This research was published in Cell Reports.

This post was originally published August 19, 2022, by Damon Runyon Cancer Research Foundation. It is republished with permission.