Researchers found a new gene, ZFP36L1, that hasn’t been studied in association with small-cell lung cancer and the protein LSD1.

Small-cell lung cancer (SCLC), which accounts for about 15% of lung cancer diagnoses, is a relatively rare but aggressive disease. Most SCLC patients respond to chemotherapy at first, but nearly all experience disease recurrence, and at that point treatment options become scarce. Because SCLC is driven by mutations that knock out “tumor suppressor” genes, rather than activate cancer driver genes, it has been difficult to treat with targeted therapies. (Consider how much harder it is to edit writing that contains no mistakes but has had all its best phrases erased.)

Fortunately, studies have shown that some SCLC patients respond to a drug that inhibits the protein LSD1, which binds to certain genes and prevents them from being “turned on.” But which genes are bound by LSD1—and how LSD1 inhibition stops SCLC growth—is not well understood. 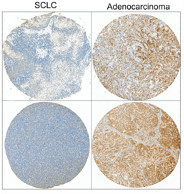 This is the question Damon Runyon Clinical Investigator Matthew G. Oser, MD, PhD, is currently investigating with his colleagues at Dana-Farber Cancer Institute. With a better understanding of how LSD1 inhibitors work, the researchers aim to determine which patients are likely to benefit from them. To this end, the team treated SCLC cells with LSD1 inhibitors and then performed a CRISPR screen, systematically knocking out different genes to identify which are required for drug sensitivity.

Excitingly, the screen illuminated several genes that were already known to be controlled by LSD1—but also a new gene, ZFP36L1, that has never been studied in association with SCLC. Upon further investigation, the team found that ZFP36L1 is repressed by LSD1 and reactivated by LSD1 inhibition. When active, the protein ZFP36L1 binds and destabilizes two other proteins that help SCLC cells grow. (For those keeping track, that’s a double negative!)

With these findings, Dr. Oser’s team offers new insight not only into LSD1 inhibition but also into the mechanism of SCLC tumor development. Their progress paves the way for more precise predictions about which patients will benefit from LSD1 inhibitors and inspires the search for other therapeutics that can restore ZFP36L1 function.