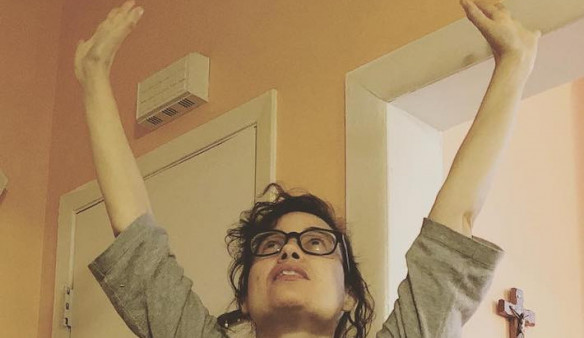 This month and every month you see pink things for sale saying “money is donated,” but please, always #thinkbeforeyoupink. Only 7 percent of the money raised goes to metatastic breast cancer research.

Dealing with a chronic illness like cancer is tough and though I laugh a lot, I definitely have been changed by the events in my life — for better and worse.

It has been almost a month since my last post, writing, anything and I guess it is because I have not felt too “super” lately…

Well, that is not exactly true — I have still had some great times — but I did not want to document them for social media or share them — they were times with my kids and stuff and friends and family… but even with the good, I did have a week or two where I felt off, down, sad, etc then I realized it was time for my Lupron shot and recognized the beginnings of a harsh PMS on its way — can you imagine if your period was stopped in February 2017 and tried to come back like yesterday how you would feel? The emotions flooded me but I got the shot in the butt just in time yesterday to stop those damn ovaries from coming back to life.

Not before the zit started to grow on my cheek, though — damn you hormones!

I have been pretty apathetic about social media, though — maybe because it is “pinktober” and there is so much being shared — last year, I was the one sharing — I did a blog post a day for all 31 days of October. This year, I have been struggling with writer’s block or apathy or something for the last few weeks tied into the hormones yes but also a bigger issue… A question, I guess, about what is next, what do I want to do how / why and all that.

Why this is, I do not know. Things have been moving and grooving for me — I have had a bunch of speaking engagements, interest in my work (with my nonprofit) and I am reminded sometimes through my own ways that writing it down, getting it out and sharing is so helpful for both my own sanity and for others…but still, I was unable to do it until right now.

Why now? I do not know but I guess now is a good as time as any to say, “I’m back, I’m here…” but I guess because it was recently world mental health day and I can say that all of us need to know we are never alone and that our emotions are a part of our lives and need to be heeded.

I know that beyond hormones for me there was also a general apathy and/or maybe depression — which I can barely type because I have never known myself to be “depressed.” I am often just ridiculously “happy” and although I have had anxiety in my life, I never often gave in to melancholy or crying in my past… NOT that there is anything wrong with that — because there is not — it just was not me to dwell or linger on bad stuff.

Now, though, after cancer and its treatments and life in general I know it can bring you down and that you should know you can get help, you can do something to help yourself however small and there should not be a stigma about feeling bad, down, depressed, whatever — even for ME, the epitome of “go go go.”

I had a therapist appointment recently — <Note: I have gone to therapists since I was in high school — yes, I said high school… — living with drama and divorce and stuff made me recognize early on that having someone to speak to was helpful and I went to my high school “counselor” for sessions and then in college continued the practice and have done so ever since.>

With my recent appointment, it had been a while since my last one and I was going over all of the stuff and my therapist was like, “Let’s not put so much time between appointments…” and it is true — I had been neglecting myself and my needs and it led to my suffering maybe more than I needed to with my feelings / stress / etc.

I cannot do that again and I hope you won’t either — dealing with a chronic illness like cancer is tough and though I laugh a lot, I definitely have been changed by the events in my life — for better and worse.

​I am still trying to juggle it all but differently now — I do not want to do too much with any one thing — I want to make a living and help people but not be CONSUMED by it — I do not want to be “famous” — I want instead to help others quietly not LOUDLY with social media documenting my every move — I want to enjoy my children — it hit me recently that within a decade, I will have two college students — no more babies but grown people who can vote and shit and omg that was a big shocker to me.

​What about you? What do you want?